Remarkably, the Beatles' butcher album cover managed to scar collectors of both yesterday and today. 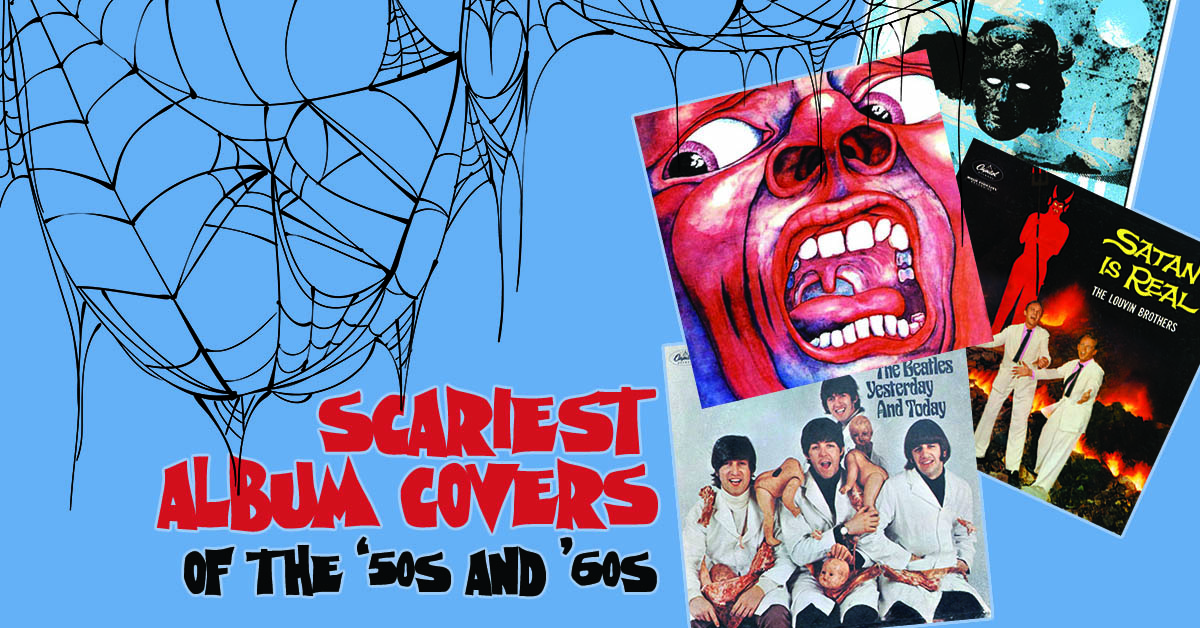 For huge fans of horror, the 1970s were the decade to get chills. Just as much as they cherish that time for horror movies shown on TV and in theaters, the decade is also known for its chilling album cover designs. As metal and punk bands started plastering the stuff of nightmares on their record sleeves, more wholesome designs of albums from the 1950s and 1960s stood in stark contrast next to the 1970s releases on the shelves.

Or did they? We went looking for the scariest album cover designs we could find that pre-date the 1970s, and it turns out, some of the world's biggest bands and artists released some truly haunting imagery that was way ahead of its time.

Below, we offer up our list of the scariest albums from the 1950s and '60s, featuring the Beatles as gruesome butchers, Fleetwood Mac with a bad omen, and other sinster concepts that we saw before the 1970s had a chance to issue a single shiver. 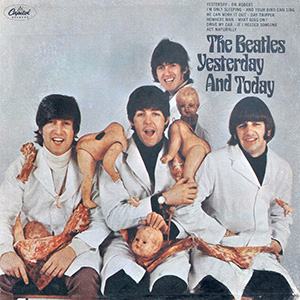 In 1966, the Beatles wanted to shake up their photo shoots, and their boy-band image — so they agreed to take part in photographer Robert Whitaker's twisted concept that found the boys in smocks, posing with baby doll parts. Many record dealers complained when this version of the cover shipped to them, but at least two of the Beatles (Paul and John) stood by the butcher concept. Still, Capitol ordered the copies to be destroyed and then pasted a new photo over the cover. It remains one of the rarer American Beatles records, so don't be spooked if you spot one. Snag it! 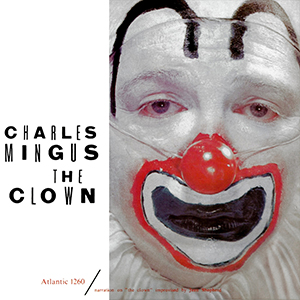 Some consider this Charles Mingus album from 1957 to be one of his masterpieces. As creepy as the clown on the cover may be, it might delight you to know that the album's title track features narration by Jean Shepherd, whom many associate with a holiday that's pretty much the opposite of Halloween, Christmas. Shepherd co-wrote A Christmas Story. 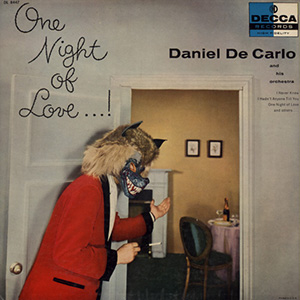 Jazz artist Daniel De Carlo had several released in the 1950s with whimsical covers, but due to the season, we were drawn to this spooky werewolf on One Night of Love. It's an image we're sure will haunt us. 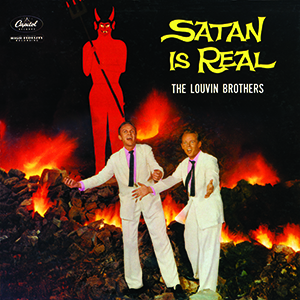 The Louvin Brothers, known for country hits like "I Don't Believe You've Met My Baby," recorded a boatload of songs in 1958. It was enough for two records. One was called Country Love Ballads. Isn't that nice? The other was a gospel record called Satan Is Real. If the vast difference in themes seems abrupt to you now, you join audiences in 1959 who found the cover jarring. Despite the initial shock, the image was supposed to signal you to the Louvins' strong morals. The album remains critically acclaimed and songs from it were even covered by the Byrds and Emmylou Harris. 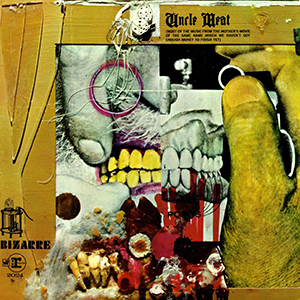 The cover of the Mothers of Invention's fifth studio album is definitely a dentist's nightmare, if not yours. That didn't stop the double-album from receiving a glowing reception initially that continues on today. In 2004 Rolling Stone called it an "inspired monstrosity." For us, it's more like inspired must-floss-ity. 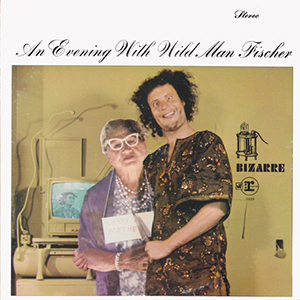 Here's another double-album, this time from 1968, that gave us chills when we first encountered it. From the convincingly wild look in Lawrence Wayne "Wild Man" Fischer's eyes to the alarming knife he wields, it's not exactly the most approachable cover we've ever seen. It will likely shock exactly no one to know the Wild Man's release was produced by staunch non-conformist Frank Zappa. 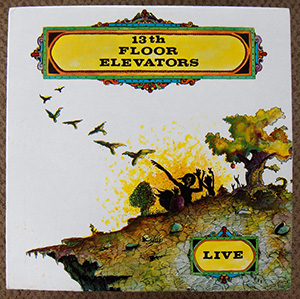 If you just catch a glimpse of this 1968 release from the 13th Floor Elevators while flipping through records in the bin, you might miss it's central haunting figure. Dark and evoking The Scream by Edvard Munch, we can't tell if the figure is man or woman, or if the birds are fleeing or attacking the figure. The intrigue goes further if you listen, because despite the title Live, this is a studio album that just dubs in completely phony cheers and applause. It's all a little strange, if you ask us. 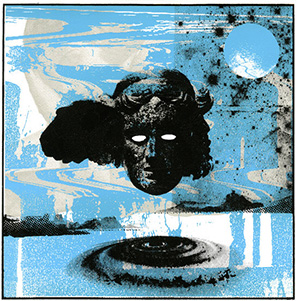 This unusual recording was initially broadcast in the U.K. and features interviews with people talking about their dreams. If you ever have a chance to listen, it's perfect for Halloween, as people narrate the dreams that haunt them and the gaping eyes on the album cover stare back at you as if to say, "It's only a dream." Right? 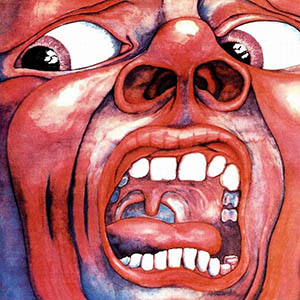 This album cover is a painting of the Schizoid Man from the first song on the record, "21st Century Schizoid Man." It was created by an early computer programmer, Barry Godber, and remains his only album cover ever. The design was meant to capture the mood of the album, and the whole band agreed it definitely succeeded. 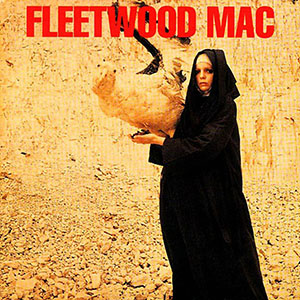 The scary image Fleetwood Mac went with for their compilation album The Pious Bird of Good Omen shows a nun holding up an albatross. According to the band, the title was meant to mock the success of their huge song "Albatross," which of course is included on the comp. Between us, we can't decide which part is creepier, the bird's slightly turned head and beady black eyes or the nun's sad eyes that seem to stare maybe just a tad too directly into our souls. 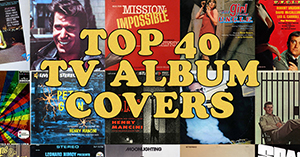 From hip spy series scores to Fonzie's favorite rock & roll, these are the coolest record sleeves from TV. READ MORE

Joe 27 months ago
I have a "Butcher Cover" album.
Like Reply Delete

LittleMissNoName 27 months ago
You are in a room that is dimly lit with a few other friends listening to jazz albums. Going through a stack, looking for the next record to play, you pick up The Clown album. There is just something uncanny about this record? It's almost like the eyes are following you. The album cover traps you in a trance and you can't take your eyes off of it or put the album down. The room suddenly goes quiet and the clown starts speaking in language and words that make no sense. Finally, able to break free from the trance and looking around, you notice that you are alone and the dimly lit room goes dark all while the clown laughs.
Waking up in a sweat, heart racing you look at the clock to see that it is 4am. Not being able to go back to sleep in fear that the clown is waiting, instead you turn on the television and watch Barnaby Jones on METV.;)
Like Reply Delete