Fashion trends that 1970s kids will remember all too well

Who could forget some of these funky styles? 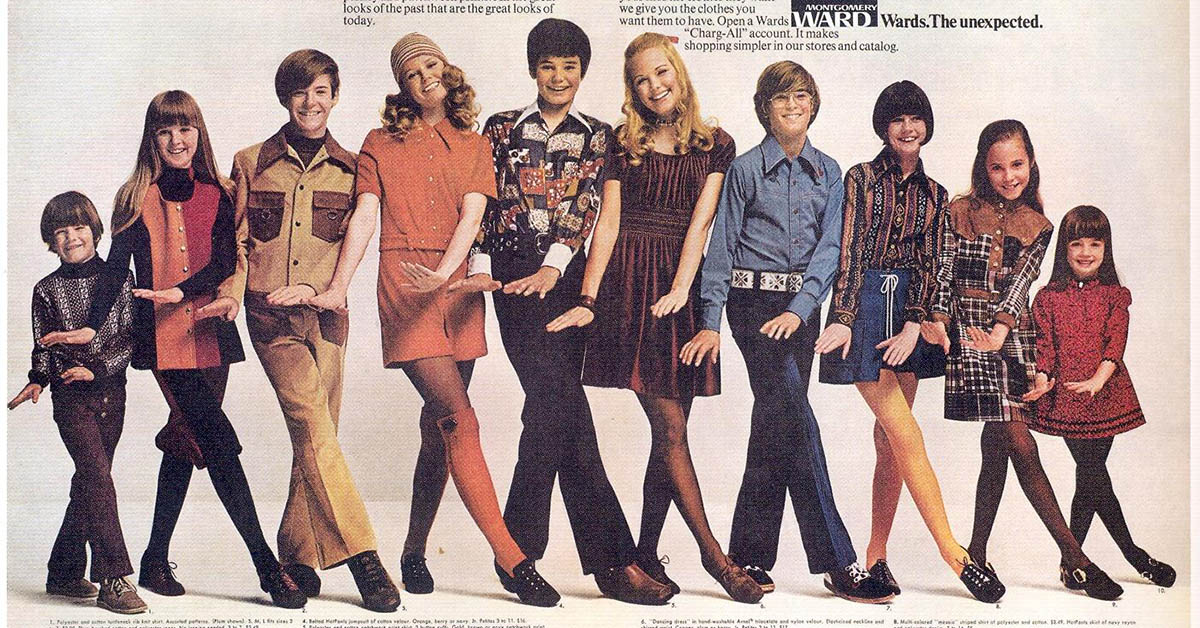 If you grew up in the 1970s, chances are you had a rockin' sense of style. Adults were donning leisure suits and bell bottoms, and stores adapted those trends to fit their littlest costumers, too.

At that time, it was impossible not to look good. But looking back, some of the best styles seem a bit ridiculous. We scoured catalogs from the most famous department stores of the decade and found some surprising trends amongst children's wear. Who knows, maybe you had one of these! 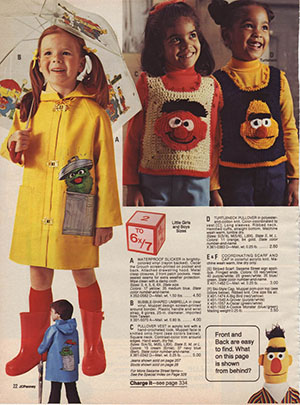 The iconic children's television show made its debut in 1969, opening up the floodgates for countless apparel items throughout the decade. Pajamas? Check. Umbrellas? You got it. Crocheted vests featuring Ernie & Bert? Of course. Even though the clothing styles have changed, Sesame Street is one trend that is still beloved by kids today. It's just on pay cable now. 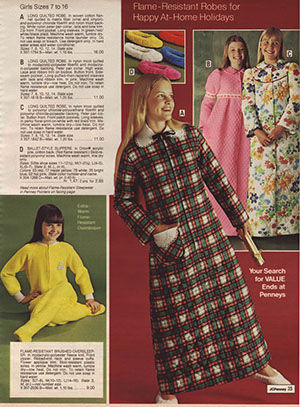 In every catalogue throughout the 1970s, flame resistant sleepwear was prominently advertised. Whether it was your Sesame Street onesie or your heavy quilted robe, pajamas were built to protect. Recently, the chemicals used in flame resistant clothing have come under fire. But in the '70s, parents could rest easy knowing their child wouldn't burst into flame while they slept. 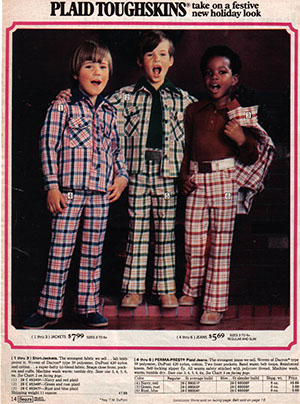 Plaid was the hot pattern. Whether it was on vests, button ups, or bellbottoms, you could mix and match plaids to become a geometric fashionista. Paired with leisure suits that were so popular among adults, kids in the '70s couldn't go wrong. 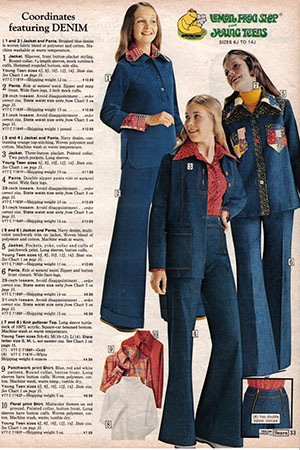 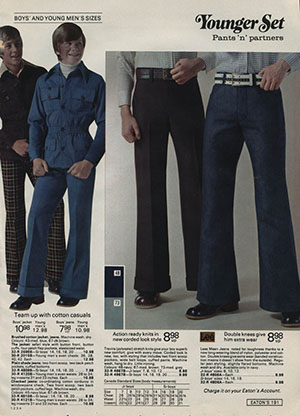 One of the most definitive '70s fashion trends wasn't just for adults. Kids everywhere mimicked their parents' and favorite celebrities' style by wearing the wide-legged pants. 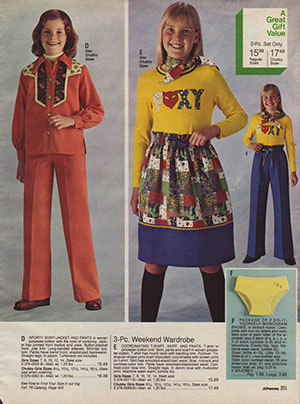 Here's something that wouldn't fly today. "Chubby" sizes were available for girls and boys who were a little more, well, chubby. The blatant wording in the ads seems so displaced from today's politically correct world. It's nice that big retailers like JC Penney and Sears aren't calling kids chubby anymore. (By the way, there were even chubby sizes in shoes). 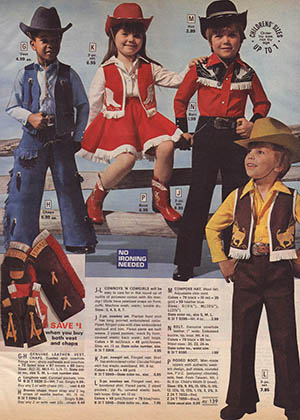 No, these aren't Halloween costumes. These are actual outfits from the 1970s. Retailers looked for inspiration from the wild, wild west by selling cowboy hats, fringed dresses and cowboy boots 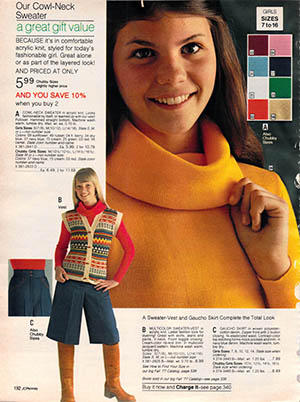 Not high enough to be a turtle neck, and not low enough to be a regular neckline — cowl necks struck a perfect medium for teenage girls in the 1970s. Cowl necks are still around today, and have even inspired the "funnel neck" and the "snood neck." 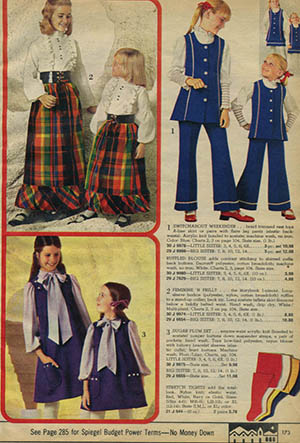 Maybe it was for your family's Christmas party, or for family photos. If you had a younger sibling in the '70s, chances are you wore matching outfits at some point. Matching clothes were the bane of any teen's existence, but they were a delight for younger ones. 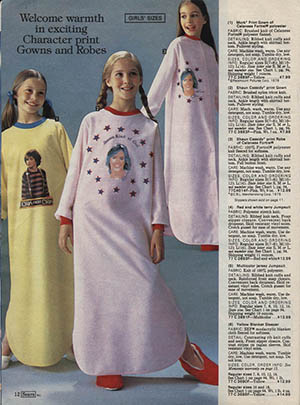 What better way to show your adoration for a celebrity by wearing their face on your pajamas? While Sesame Street and Disney adorned kids' pajamas, celebrities like David Cassidy adorned those for teens. Bonus points for the girl wearing the Mork PJs in the photo. 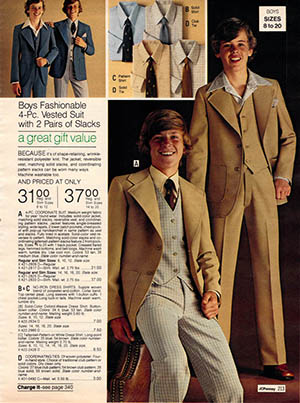 There was a point in time when it looked like collars could just fly away from a button up shirt. The long, pointed collars of the 1970s were big, and the trend trickled down into children's fashion. The longer the collar, the better. The one featured in this photo almost touches the boy's shoulders — very nice!

RedSamRackham 5 months ago
* Western wear existed well before 1970's when boys wanted to be cowboys! ☺
Like Reply Delete

TVFF 17 months ago
I tended to wear Levi's 501 jeans to school most of the time. I never got into funky clothes.
Like Reply Delete