Get a deeper look at items from the "Meet Mancow" collection. 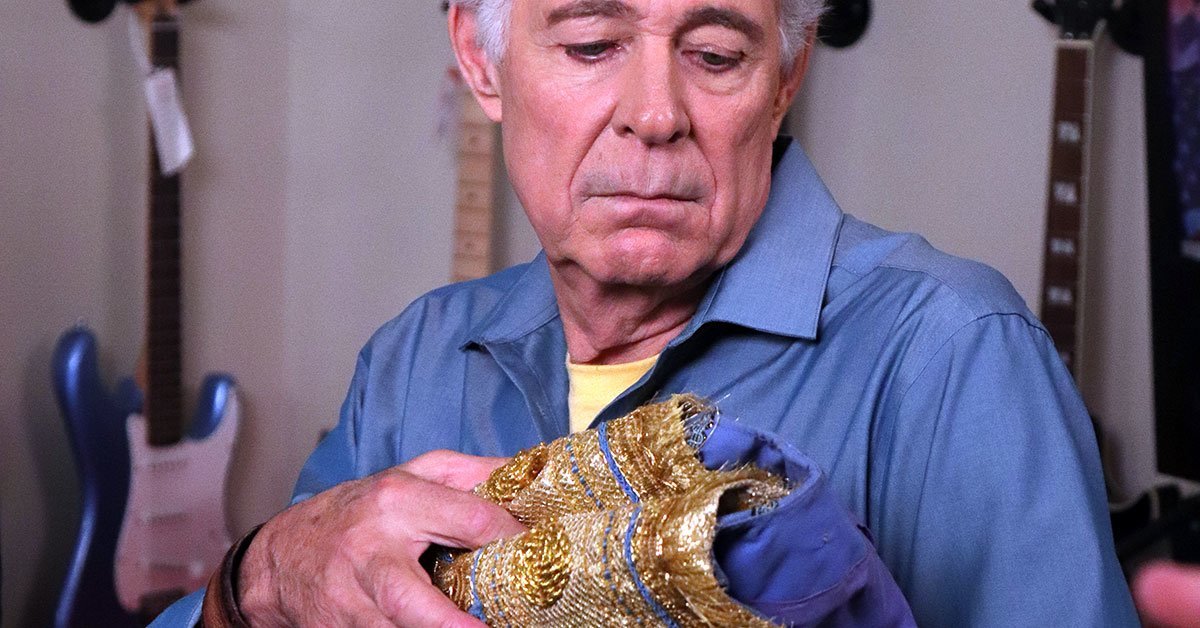 Mancow Muller spends his days as a radio personality and author with a national following, but his true passion is his collection of movie, TV and music memorabilia, which he’s been amassing over the past three decades.

As a kid, he loved getting autographs — and even after all of his years in the radio industry, he's still collecting those autographs on items that range from guitars to historical letters, and props from his favorite TV shows and movies.

There was too much good stuff to fit into our episode! Check out more from this awesome collection.

Joining Mancow to show off his collection is his longtime friend Barry Williams, better known as Greg Brady of The Brady Bunch!

1. Meet Mancow: Inside the Collection 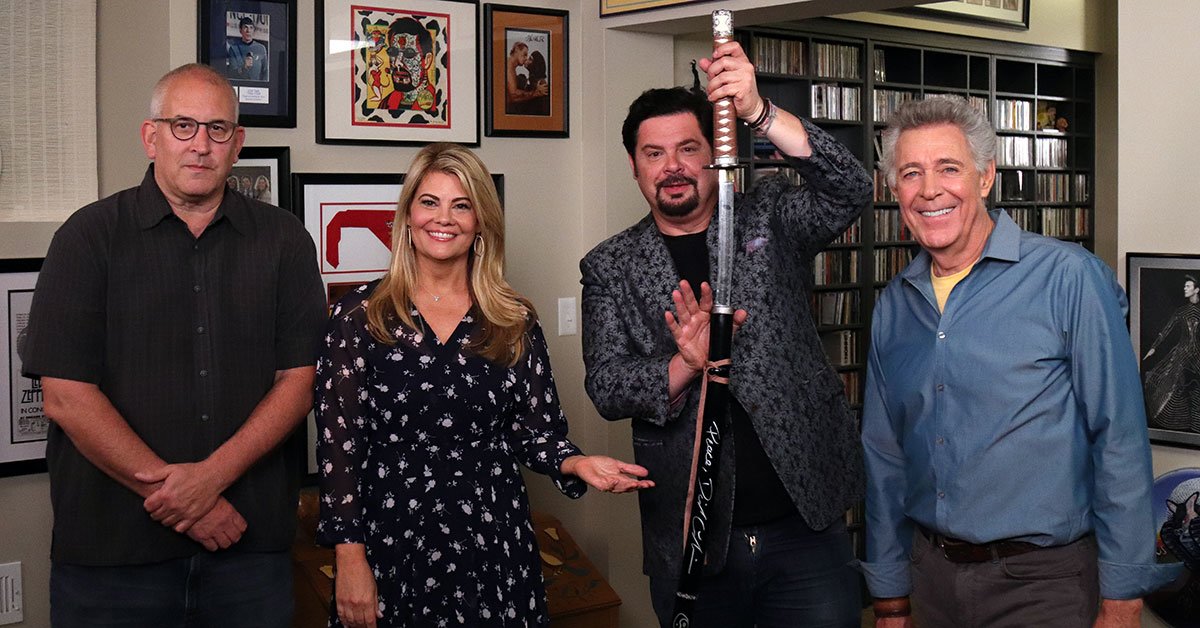 Get a closer behind-the-scenes look at the episode "Meet Mancow." Check out the original Johnny Bravo jacket from The Brady Bunch, as well as rare props from Lost in Space, James Bond, Star Trek and more! SEE MORE 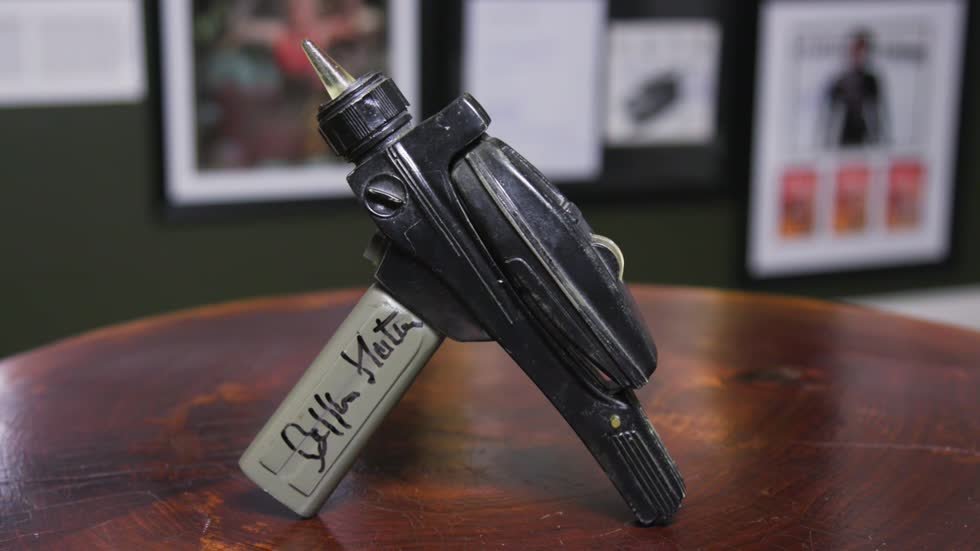 According to Mancow, William Shatner himself used this prop phaser on the set of the original Star Trek series. If Mancow can get his pal Shatner to authenticate that fact, it could be worth six figures! WATCH THE VIDEO 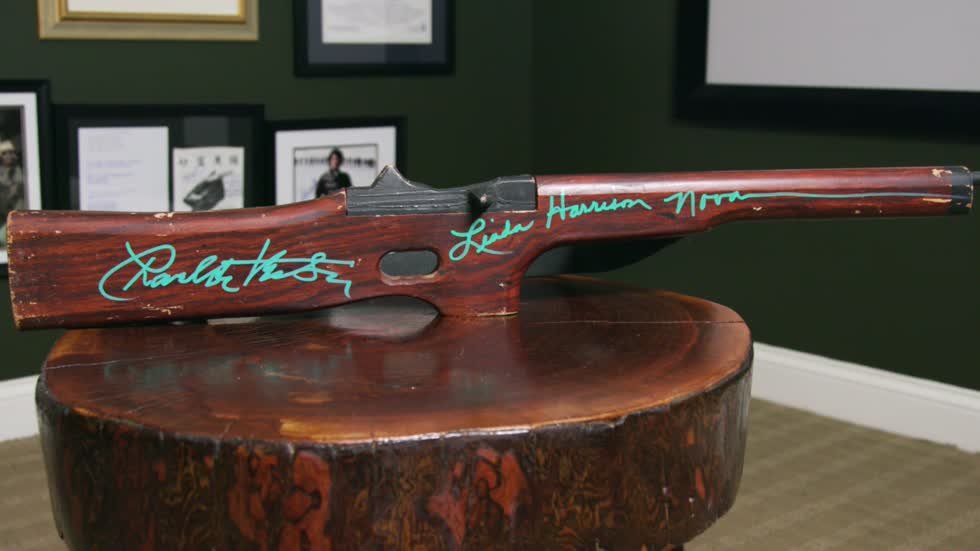 Mancow paid about $800 dollars for this rifle used in the classic 1968 sci-fi film Planet of the Apes. Charlton Heston and Linda Harrison, stars of the movies, signed the gun in teal ink. How much is it worth today? WATCH THE VIDEO

ELEANOR 37 months ago
So frustrating, all those things to look at and yet they focused on just three things. Couldn't they just have them do a general walk around? I was so disgusted that I turned it off.
Like (1) Reply Delete

MaryMitch 37 months ago
I couldn't believe he traded to get the "Johnny Bravo" jacket. It just goes to show - one's man trash is another man's treasure.
Like Reply Delete

ItalGal68 MaryMitch 37 months ago
i think Barry Williams is a jerk, but I also think Mancow and Williams arranged it so Mancow keeps everything! He probably paid Williams (his friend) for the jacket and gets to keep the guitar, too. I think they just wanted to avoid any trades the other guy wanted to offer.
Like Reply Delete

ll675i 37 months ago
a cell phone? really shows that not one of those people ever watched Star Trek
Like Reply Delete

DavidH 37 months ago
BONUS VIDEO: Star Trek phaser prop signed by William Shatner
What a bunch of dummies thinking the the phaser contained a "cell phone."

ELEANOR DavidH 37 months ago
The guy who invented the cell phone got his inspiration from -- you guessed it -- the Communicator used on the Original Star Trek. He was on the beach and wanted to make a phone call. Then he turned on Star Trek and noticed how they whipped out the communicator, flipped it open and spoke into it. Voila, soon we had the flip phone.
Like (1) Reply Delete 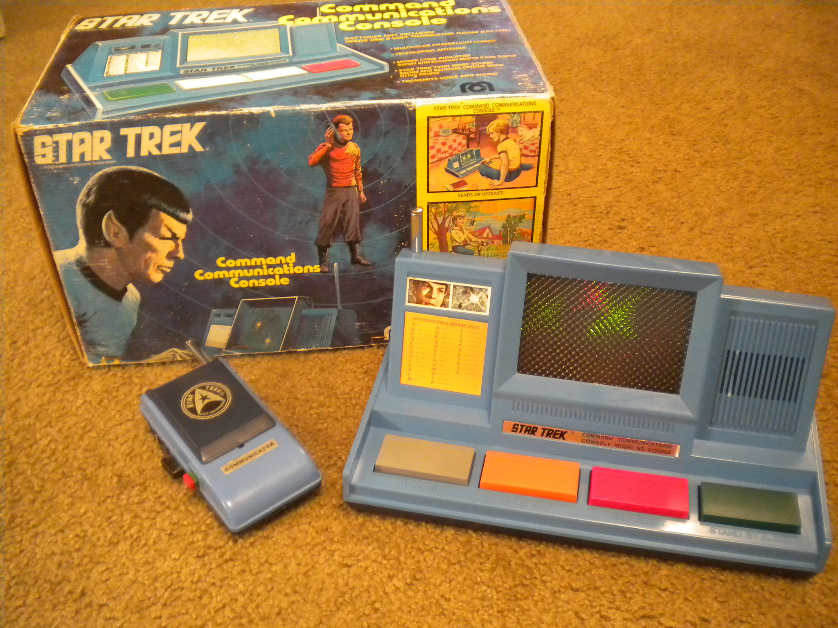 MaryMitch DavidH 37 months ago
Didn't the top of the phaser separate to be the communicator? He said something like "it's the original Transformer." I don't think on the show they ever did that, but maybe the prop was built like that.
Like Reply Delete

Or drag a file here to upload
texasluva 37 months ago
He could have easily taken that samurai sword since Bud got face bitten by a Black Mamba. In reality if bitten elsewhere you will have 30 minutes to a couple of hours to acquire anti-venom. It is not readily available. Up the creek without a paddle I'd say.

Mattel also made some space and ROTO Jet guns during The Lost In Space Series. You could also buy Lost In Space Robots, space craft and other weapons. http://www.attackingmartian.com/remco_extra.html

A nice collection this guy has and I would die to have it myself. What are some of the collectibles that the rest of you have or did in the past?

RobCertSDSCascap texasluva 37 months ago
I collect rare oddities. I am also a voluminous Phillumenist. At one time,
I had posted over 10,000 different matchbooks and matchboxes on Flickr.
As far as sci-fi, I had a Phaser with a flashlight "beam" and sound effects
and a Rayline Tracer Disc Gun.
Like (2) Reply Delete
texasluva RobCertSDSCascap 37 months ago
That is a awesome collection you have. I had at one time about 4,000 comics which 1,000 of them were in the Sliver age. One set was Amazing Spiderman #6-500. I sold them all mostly one at a time on Ebay 8 years ago. I think about 20 of them were graded. Also had 1,000's of sports cards. Mostly 1950's-1960's. In that group I had Mickey Mantle from 1957-1969. My favorite was the 1958 Mickey Mantle All-Star Card. Had 4 of those over time. 3 were probably in the VG category and one being around a 7.0. I did around 1200 sells on Ebay and maybe 200 buys myself. I wish I still had the photos. My system went down in 2014. So lost most everything before that time as far as photos are concerned. I have all the sells though because I put into email files. I believe Ebay took those pics down years ago. I am going to check today to see if any photos still available. Also old magazines from like 60-80 years ago (Sports Illustrated and others). I scanned all to put into Ebay and even some on Craig's List. Also had a large stamp collection. Just glad you don't collect those funky clowns you tried to lay on me awhile back he he he (coulrophobia).
Like (1) Reply Delete

RobCertSDSCascap texasluva 37 months ago
(sings)
Won't you show me some...
funky clowns!
Coulrophobia? Was sure that was fear of Dave Coulier!
You are obviously a collector's pro! It's also great how much you enjoy it.
I love eBay too, though I never sold anything as nice as yours. Closest I
came (still have the letter congratulating me) was winning a highly graded
Mickey Mantle rookie card in a Walmart contest! I had to decline, because
the taxes on it would have wounded me. Still amazing, because only 52
potential winning cards were printed!

Like (1) Reply Delete
texasluva RobCertSDSCascap 37 months ago
Interesting. Yes if the card would have been a 1952 Mantle in lets say average condition we are talking a minimum of 25 grand. The prices have sky-rocketed the past 25 years. I have seen some selling for well over 50 grand. I am afraid I am not in that ballpark. I've sold some cards for around $300. A guy in Boston bought 5 of my Amazing Spiderman comics for $1000 (about 10 years ago). I can deal with Funky Town but Clowns not so much. The strange thing is that clowns over the last few decades have turned evil. Bozo The Clown never scared me but his predecessors somehow became ones that escaped the Lunatic Asylum then painted up to become what they are today.
Like (1) Reply Delete

RobCertSDSCascap texasluva 37 months ago
The card was listed as having a value of 20 grand. It was exciting just winning!
This was in 2006. I grew up in the 70s and 80s and never remember even
knowing anyone afraid of clowns. Unfunny clowns are something different.
Wrestlers dressed as clowns or musicians dressed as clowns- meh.
Like Reply Delete

Pacificsun 37 months ago
Those collectables are ONLY available through trade now. That's what makes them even more fascinating. It's now a matter of estimating which memories (and curiosities) stand out more in pop culture!!
Like (1) Reply Delete