Where To Watch Shop Store Contact
Home / Stories / 8 things you never knew about the great Harry Morgan
Did you know?

8 things you never knew about the great Harry Morgan

This certainly isn't a load of "horse hockey."

It's a rare caliber of actor who can be found starring in two TV series on MeTV. Only the legends can claim to have multiple classic shows. You can watch Andy Griffith on The Andy Griffith Show and Matlock. Buddy Ebsen shows his range on The Beverly Hillbillies and Barnaby Jones. Other hall-of-famers who fall into this class are Lucille Ball, Dick Van Dyke, Mary Tyler Moore, Raymond Burr, Gavin McLeod and William Shatner.

Perhaps overlooked in that pantheon is Harry Morgan. Most know him best as Col. Potter on M*A*S*H, but a decade earlier he was chasing crooks on Dragnet. Before that, he was a 1960s sitcom star in his own right.

He could play stone-faced and elicit big laughs. Let's dig deeper into the career of the incomparable Harry Morgan.

1. He went through a lot of name changes. 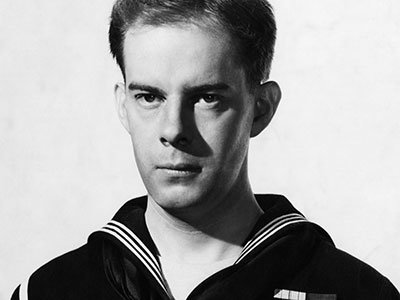 He was born Harry Bratsberg in Detroit, Michigan. When he was a student, his surname was incorrectly logged as "Bratsburg," but the good-natured Morgan just went along with it. He was even billed as Harry Bratsburg onstage in New York. When he made his film debut as "Mouthy" in the 1942 war flick To the Shores of Tripoli, he used the credit "Henry Morgan." However, there was a popular humorist with that name (the funnyman Henry Morgan was a frequent panelist on I've Got a Secret), so he at last settled on "Harry Morgan." 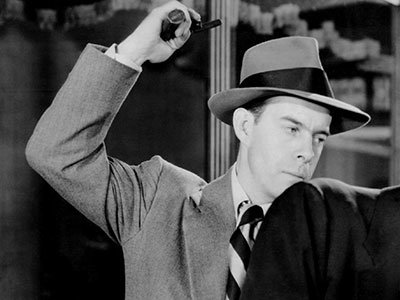 As we mentioned up top, Morgan jumped aboard the 1967 Dragnet revival, playing Officer Bill Gannon alongside Jack Webb's Joe Friday. Morgan was no stranger to the fiction world of Joe Friday. Way back in 1950, Morgan had voiced a hotel clerk in an episode of the Dragnet radio program, "The Big Boys."

3. He had a long history of working with Jack Webb 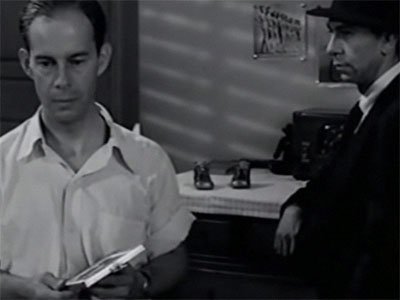 Morgan had a long working relationship — and friendship — with Jack Webb. He appeared alongside Webb in noir movies such as Dark City (1950) and Appointment with Danger (1951, pictured here). Following Dragnet, Morgan worked on more Webb TV shows, The D.A. (1971) and Hec Ramsey (1972).

4. He played the same character decades later alongside Tom Hanks. 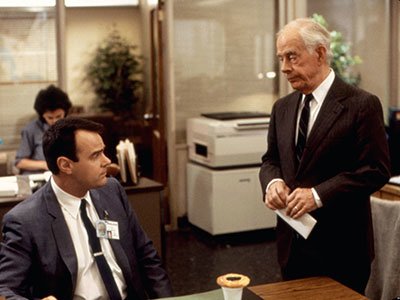 In 1987, five years following the death of Jack Webb, Tom Hanks and Dan Aykroyd starred in a big-screen adaptation of Dragnet. Aykroyd, hot off Ghostbusters and Spies Like Us, again wrote and headlined the comedy. (Yes, this Dragnet was a comedy.) Morgan reprised his role as Bill Gannon, who was now running the show as captain. In a way, the role combined his M*A*S*H and Dragnet personas.

5. He portrayed his Dragnet character on The Simpsons, too. 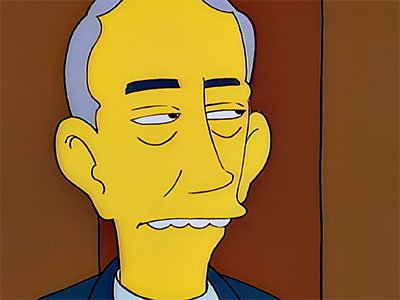 In 1995, Morgan once again slipped into the role of Bill Gannon on a season-seven episode of The Simpsons, "Mother Simpson." This time, Gannon was an FBI agent! He kept moving up.

6. He starred in two sitcom spin-offs. 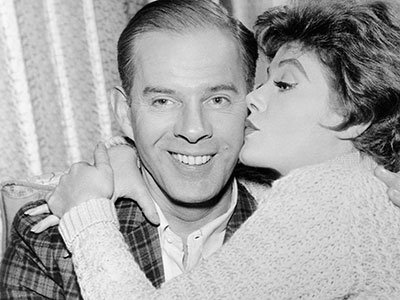 Morgan landed his first big breakout television role on the sitcom December Bride (1954–59), playing the a typical neighbor character, named Pete Porter. Pete constantly complained about his unseen wife, Gladys. Well, she was unseen until the couple got a spin-off series in 1960, Pete and Gladys. Cara Williams slipped into the role of Gladys — and garnered an Emmy nomination for Best Lead Actress. Of course, Morgan earned another spin-off following the finale of M*A*S*H when he headlined AfterMASH, which followed Potter back to his home in Hannibal, Missouri.

7. The photo on Potter's desk in M*A*S*H was Morgan's actual wife. 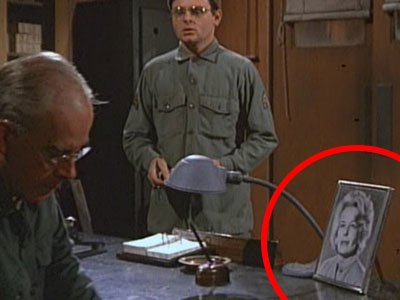 Following the McLean Stevenson's departure from M*A*S*H (and the death of his Henry Blake character), Sherman T. Potter assumes the command of the 4077 at the start of season four. In the episode "Change of Command," Radar helps Potter decorate his office. Potter puts a portrait of Mildred on his desk. Through the series, Potter speaks lovingly to this picture. It's actually a photograph of Morgan's wife, Eileen Detchon. The two were married for 45 years, until her death in 1985.

8. His grandson drew the horse behind Potter's desk. 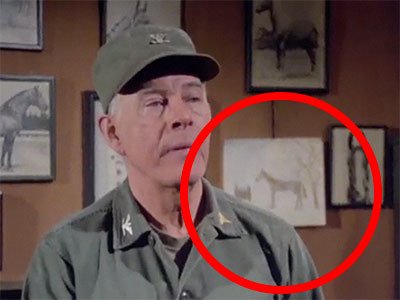 That Mildred portrait was not the only piece of artwork in Potter's office with personal meaning to Harry Morgan. Images of horses covered the wall behind his desk. You might notice a child's drawing of a horse standing next to a tree. That was made by Morgan's grandson, Jeremy Morgan. 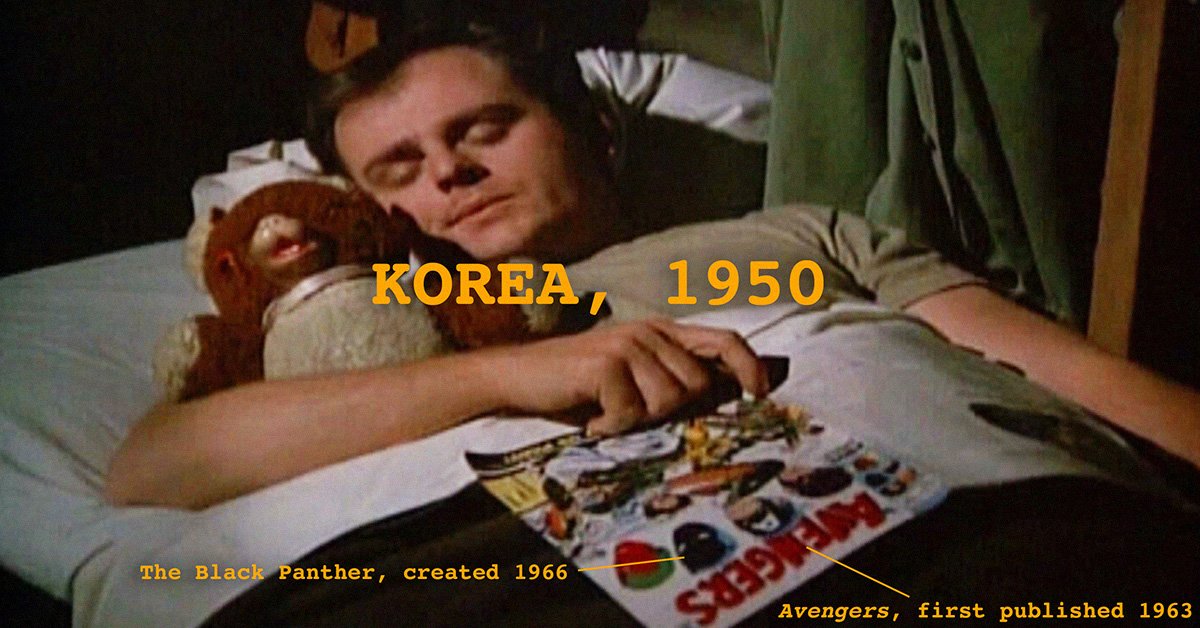 Radar just might be a time traveler. READ MORE

AlF 30 months ago
These days, nobody would consider moving to the FBI "moving up". When I was a kid, watching shows about the FBI made you want to be one of the good guys. Now we know none of the good guys are left. If there were, they would have "cleaned house" by now to protect their reputation. Back in the day, our tax dollars went to pay the salaries of good men like Gannon and Friday. Now we pay the likes of Comey, Strzrzrzok, Page, McCabe, Rosenstein, Wray, and Muller to work against us. Don't even get me started about the CIA...
Like (3) Reply Delete

SDWriter AlF 25 months ago
Back to outer space, orRussia, with you.
Like Reply Delete

I'm glad to see a mention of Henry Morgan, as I'm a big fan of his.
Like Reply Delete

JDnHuntsvilleAL 30 months ago
165 actor listings on the IMDb. That's quite an achievement.
Like (1) Reply Delete

SalIanni 30 months ago
Another Harry Morgan role that I love and remember was that of "Whiplash Willie" on the second episode of "The Partridge Family" where he gets involved in a very minor car accident with the Partridge Family bus that he turns into a million-dollar lawsuit.
Like (3) Reply Delete

harlow1313 30 months ago
I like the episodes of Dragnet where the strait-laced Gannon and Friday collide with the counter culture. I particularly love The Blue Boy and The Temple of the Expanded Mind.
Like (4) Reply Delete

teire 30 months ago
I knew some of these, remember the old Dragnet and December Bride/Pete & Gladys (tho both may have been reruns when I saw them). Always liked him, a comforting presence in any role.
Like Reply Delete

JbDean 30 months ago
He was a fun actor & I grew up w his Dragnet & later M*A*S*H when I was a teen. But something that should never be forgotten is that he was accused of beating that lovely wife of 45 years & only escaped jail time because he agreed to take Anger Management classes. As a survivor of spousal abuse, I know that it’s RARELY something that happens just once.

MrsPhilHarris JbDean 30 months ago
That was his second wife not the first.
Like (3) Reply Delete 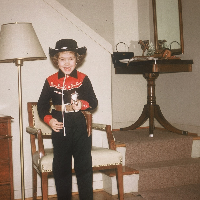 bookscape MrsPhilHarris 30 months ago
And I thought that he had also been suffering from dementia at the time as well. Wasn't that near the end of his life?
Like (1) Reply Delete

MrsPhilHarris bookscape 30 months ago
Apparently he was and it was assumed that it was the reason for the abuse.
Like Reply Delete