The TV show about motorcycle cops featured former Olympians and racing champions. Here are things you might not know about Ponch and Jon. 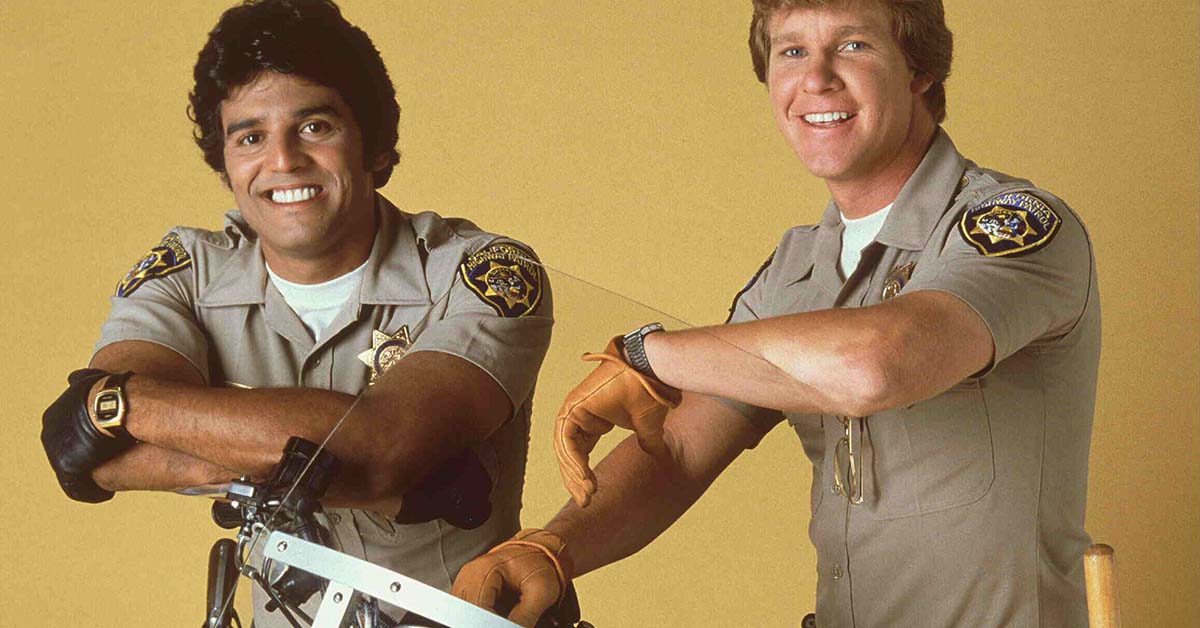 Share
With their short sleeves, shades and Kawasakis, Ponch and Jon were the coolest cops on television in the late 1970s and early 1980s. The two California Highway Patrol riders delivered action, laughs and little dash of disco dancing to television sets. (Hey, there was a reason it was aired on Saturday nights for a while.) The series made Erik Estrada and Larry Wilcox stars and pin-ups. All the kids on the block zipped around on bikes imaging themselves as CHiPs officers. There were dolls, trading cards and lunch boxes. CHiPs latest for six seasons, cruising through some cast shake-ups, and ending on a season filled with enough robots, UFOs and rock bands to make it at home in the 1966 lineup.
To salute the two motorcycle cops, we rounded up some intriguing trivia about the TV show.

Oh, and did you ever wonder if you're more Ponch or more Jon? Take our CHiPs personality quiz and find out.

1. Erik Estrada did not have a motorcycle license at the time …although he did become a real police officer 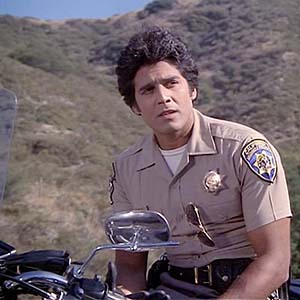 To prep for the series, Estrada and Wilcox took motorcycle lessons from a police academy expert. The training paid off, as the two performed a good deal of their own riding. As he later revealed in an interview, Estrada had never ridden a motorcycle before. Decades later, the actor became a deputy sheriff in Bedford County, Virginia, and a reserve police officer in Muncie, Indiana. In the Hoosier state, he was required to log 96 hours a year on the street to keep that status.

2. Baricza was the only character to draw his gun on the show 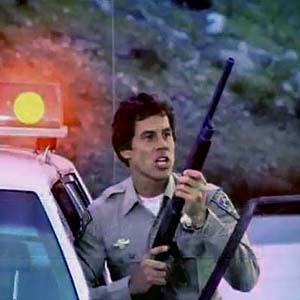 Though they sported holsters, Ponch and Jon were never seen drawing a weapon on the series. Patrol Officer Barry Baricza, on the other hand, wielded a weapon a few times. He was the only one to do so. It was a relatively family friendly show when it came to violence, considering the topic. Over the course of six seasons, nineteen characters die, two of them CHP officers.

3. Bruce Jenner briefly replaced Estrada after he went on strike 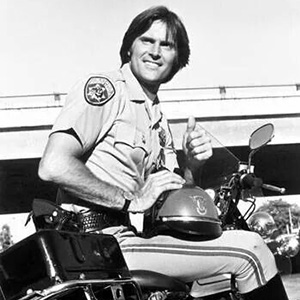 In 1981, at the start of season five, Estrada asked for a larger cut of the syndication cash. When he was denied, the star walked out on the show. Producers replaced Ponch with the character Steve McLeish, played by erstwhile Olympic gold medalist Bruce Jenner. The replacement only lasted half a dozen episodes before Estrada returned. During the contract dispute, Estrada's name continued to appear in the credits, and Jenner was listed as a guest star. 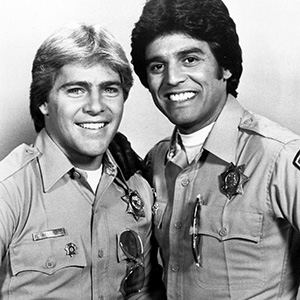 A year later, it was Wilcox who stepped away. Filling the boots of the blonde lead were two actors, Tom Reilly and Bruce Penhall, who portrayed the brothers Bobby and Bruce Nelson. A more than accomplished motorcycle rider, Penhall won the 1981 and 1982 Speedway World Championship. In fact, the episode "Speedway Fever" was filmed around Penhall's actual competition for the 1982 trophy, and footage of the race appears in CHiPs.

5. The theme song became a disco single in Japan called "I Love You CHiPs" 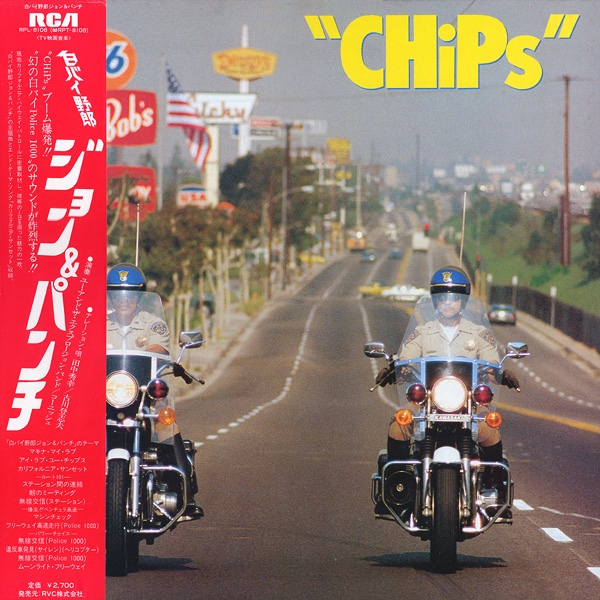 John Parker wrote the jazzy new-wave instrumental that served as the show's catchy theme. The tune was released as a single in the States under the odd alias Corniche. The B-side was a ditty called "California Hustle." The song was a bigger sensation in Japan two years later, as it was released with a full soundtrack. The album features a couple curious cuts by jazz fusion artist Yuji Ohno, like this disco number "I Love You CHiPs."

6. Star Trek's Michael Dorn was on the show 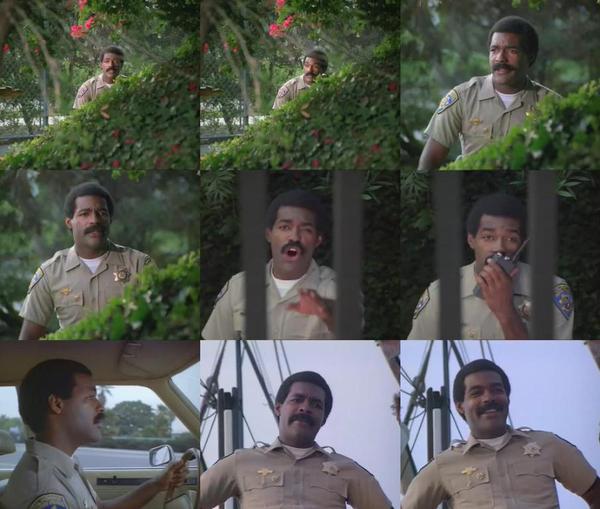 Before becoming Wolf on Star Trek: The Next Generation, Dorn was Jeb Turner on CHiPs. He doesn't talk about the show much, though he did take to Twitter earlier this year to post these images on Throwback Thursday. That is not the only Trek link, of course. Robert Pine, who was series regular Sgt. Getraer, saw his son, Chris, assume the role of Captain Kirk on the big screen.

7. There was to be a spin-off about ninja cops called 'Force Seven' 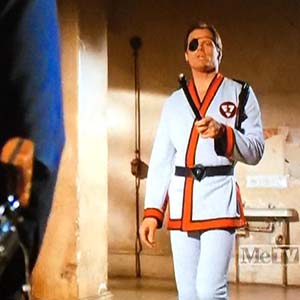 In one of the most un-CHiPs episodes of CHiPs, we are introduced to an elite martial arts squad of the LAPD. There's a reason Ponch and Jon take a backseat in this 1982 outing. Force Seven was meant to be an NBC pilot, yet the spin-off never made it past being a season finale for the motorcycle patrol show. Fred Dryer played the eye-patch-wearing ninja cop (!) leader of Force Seven, and this pilot failure at least led to him being snatched up a year or so later for Hunter. 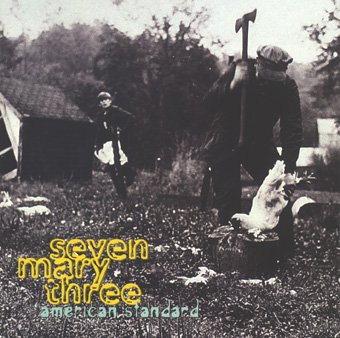 If you listened to a radio station with "X" in the title during the Clinton administration, you undoubtedly heard Seven Mary Three's "Cumbersome" countless times. The Virginia-based rock band took its name from Jon's call sign on CHiPs, 7 Mary 3. Hey, if the group is ever driving through Bedford County, it should look out for a deputy sheriff who might be upset the band didn't settle on Seven Mary Four.
Are you sure you want to delete this comment?
Close

TvMistress 30 months ago
the show is not on the playlist .. where is it and I want to watch it!!! #ponchlover
Like Reply Delete

TvMistress trekker9 30 months ago
Everybody knows that and most likeable for a Klingon working for Starfleet Command.
Like Reply Delete