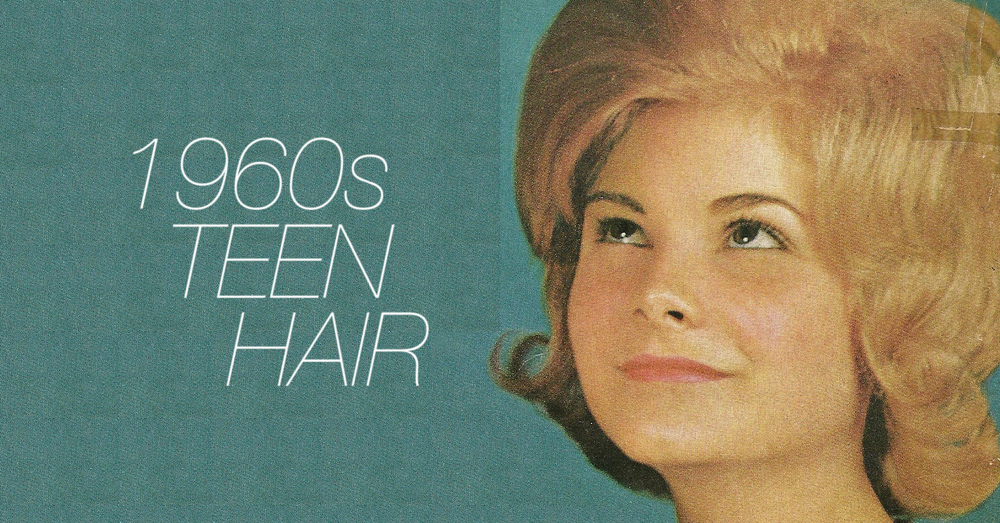 Few decades had better hair style than the Sixties. Plus, the cuts were fun to say. It was the era of beehives, mop-tops, bobs and pageboys. The feathered hair and perms of the 1980s have not aged well, yet heads of the Beatles, Supremes, Dusty, Twiggy and Goldie continue to look great on the runways and streets.

No publication better captured the quickly shifting trends in 1960s hair than Teen. The magazine ran from 1954 and 2009, but something about the Sixties output makes us feel extra nostalgic. Let's dig through the stacks and look at some of the most memorable covers from the decade. 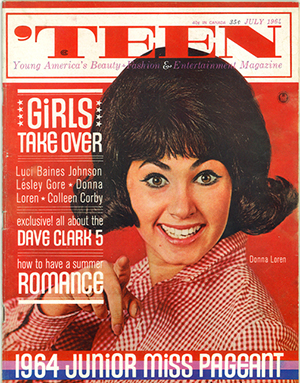 Donna Loren was a teen herself when she posed for this pointed shot. A spokesperson for Dr. Pepper, the singing actress appeared on Shindig! and popped up once on Batman. Months after this cover, the Hollywood Makeup Artists and Hair Stylists Guild named Loren one of its Deb Stars. 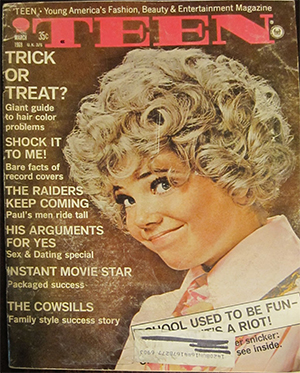 Perhaps this is where Vicki Lawrence got her Mama's Family look? In defense of this prematurely coifed model, the cover lines do promise a "Giant guide to hair color problems." 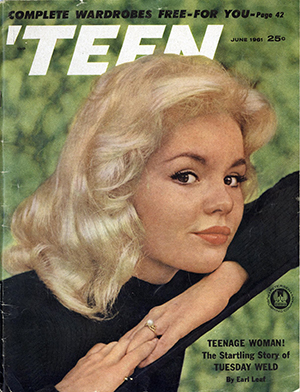 Tuesday Weld was a true style icon of the era. It's no wonder she was one of Dobie Gillis' many loves. She made an impression on the next generation, as well, popping up on album covers in the 1990s. 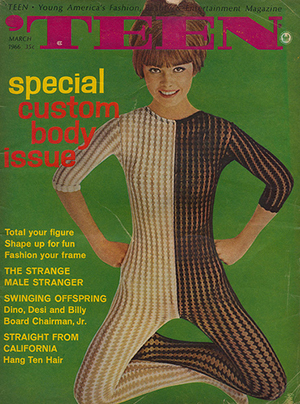 That is quite an outfit, ready for Kirk's dreams or a Batman villain's lair. The cover teases "Hang Ten Hair" for the surf craze, though it's hard to image wearing this pageboy-beehive hybrid (Page-hive? Bee-boy?) in the ocean. 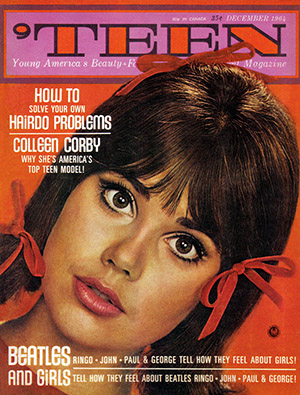 Colleen Corby was the teen model of the 1960s. The brunette with the swooping locks appeared on a stunning 15 covers of Seventeen magazine in the decade — five times in 1964. This was the final look of that dominant year. We'd love to read that Beatles feature, too. 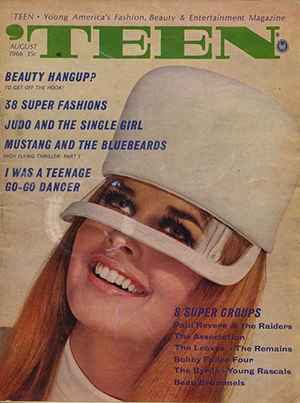 Okay, so it's more of a hat-style than hairstyle. The funky, futuristic hat looks like one of the wilder uniforms of Braniff Airlines. This issue also offers alluring pieces like "Judo and the Single Girl" and "I Was a Teenage Go-Go Dancer." As music junkies, we are fascinated by the "8 super groups" that include some legends (The Byrds), some biggies of the era (Beau Brummels) and some deep obscurities (The Leaves).

Ah, yes, so this is when Beatlemania hit. Mop-tops were for boys and girls. 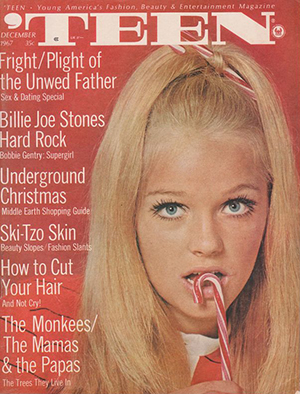 Tying your hair with candy could only work in the winter. Good luck getting melted sugar out of your ends when that melts in the summer. If there was any doubt of how high-stakes hair was at the time, read "How to Cut Your Hair And Not Cry!" 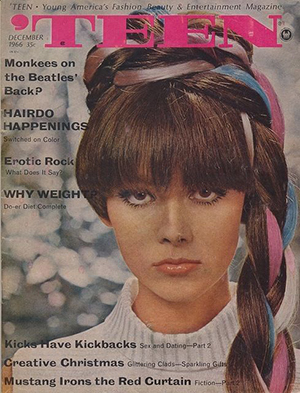 Again we see the unmistakable bell curve of Colleen Corby's doo. Credit to Teen for featuring flowers in her hair a good two years before Scott McKenzie's hit "San Francisco (Be Sure to Wear Flowers in Your Hair)." 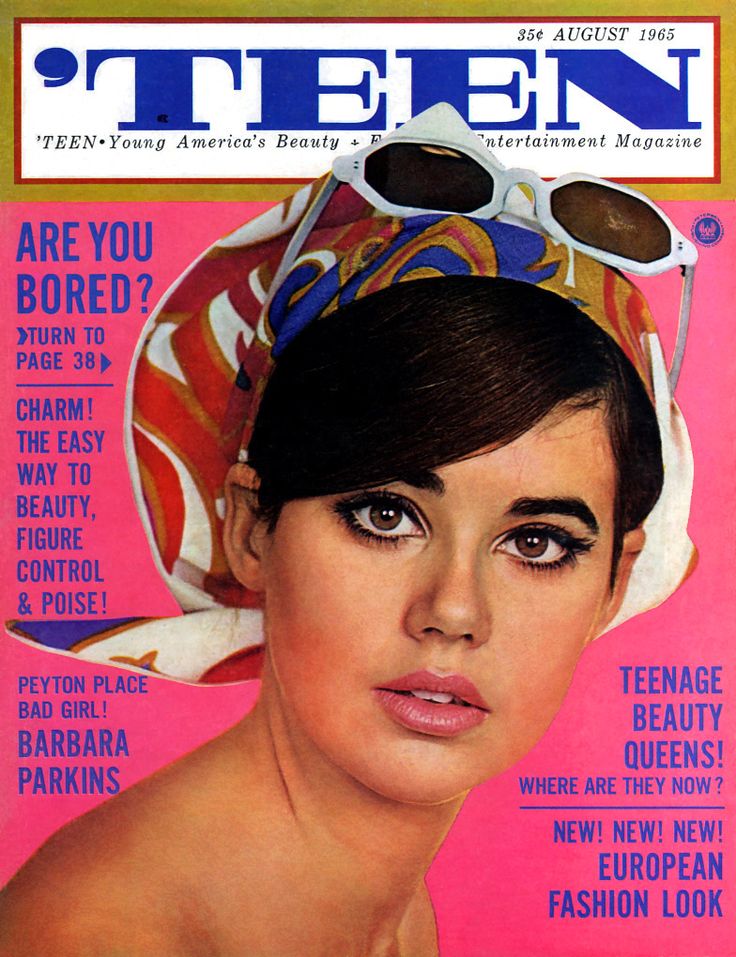 You guessed it, Corby again. Alas, Barbara Parkins, the "Peyton Place Bad Girl," did not make the cover. I always heard how my grandmother would not allow my mother to watch that show. Perhaps she was too risqué for Teen. 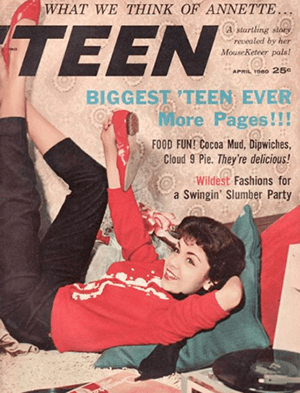 We would be remiss to not include Annette Funicello. Anyone remember what Dipwiches, Cocoa Mud and Cloud 9 Pie were? We don't know, but we want it. 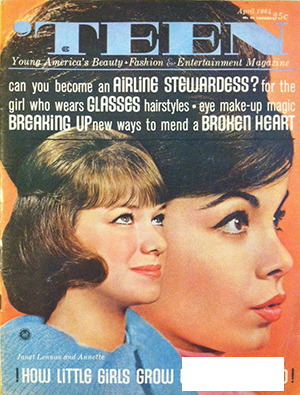 One more Annette for good measure. Before Beatlemania truly took over, well before hippies, girl groups were fashion templates. Who wouldn't want to look like the Shangri-Las? Even the wholesome Lennon Sisters (that's Janet on the left) were fashion plates. 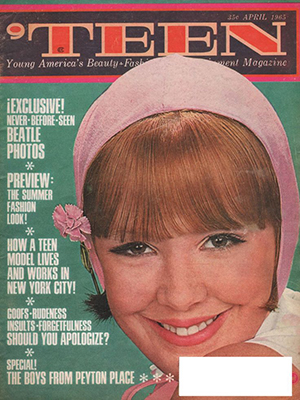 Bangs and swim caps. What else do you need? 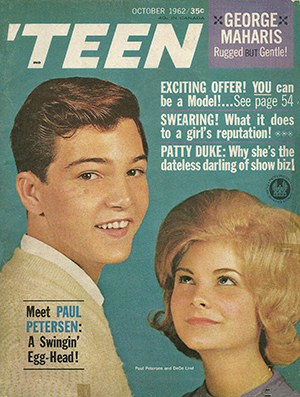 Boys made the cover too, especially dreamboats like Paul Petersen, better known as Jeff Stone on The Donna Reed Show. The actor (delightfully labeled a "swingin' egg-head") is pictured here with model DeDe Lind, who would gain more fame from her Playboy spreads years later. We also dig the description of Route 66's George Maharis: "Rugged but gentle." 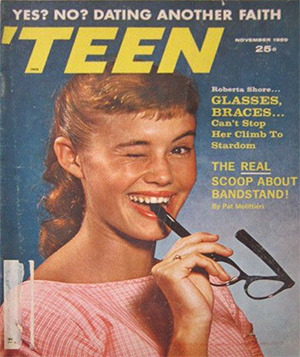 Yes, we're cheating, it's from 1959, but it's a mere two months before the Sixties. Besides, we love that glasses and braces were no hindrance to making the cover of a mag. Roberta Shore starred in dozens of TV shows and movies, from Disney flicks to Wagon Train. 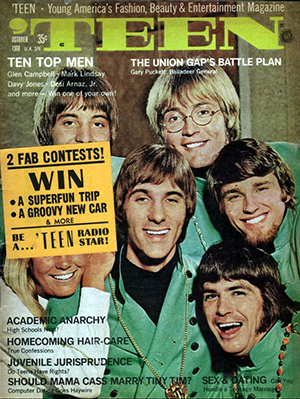 Gary Puckett & The Union Gap? On the cover of a teenage magazine? Huh. It was a different time.
Are you sure you want to delete this comment?
Close

Joe 11 months ago
Those covers are GREAT!
Like Reply Delete