Few have led so full a life. Learn fascinating facts about the actress' schooling, wigs, salary and friendships. 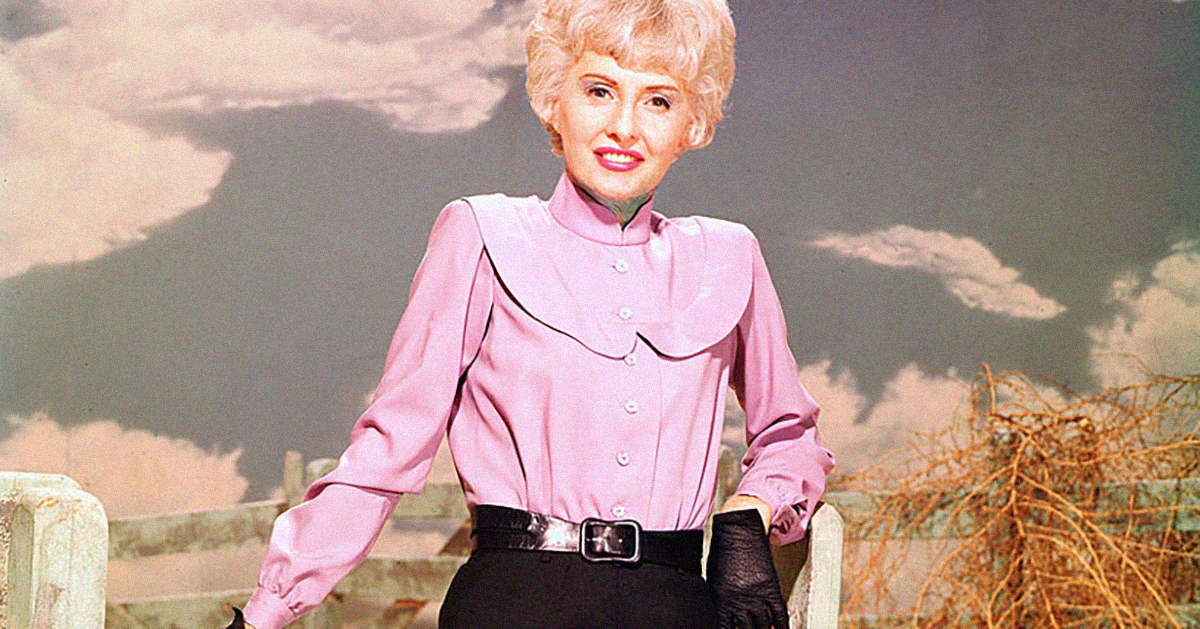 How does one condense so great a life into a dozen bullet points? It is impossible. Barbara Stanwyck is carved into the Mount Rushmore of Hollywood actresses. The recent biography of the legend, A Life of Barbara Stanwyck: Steel-True 1907-1940, packed a whopping 1,056 pages — and that is just the first volume, the first third of her life.

Born Ruby Stevens, the Brooklyn native had a hard, full childhood that led to an uncommonly precocious start in showbiz. She went on to become one of the most beloved figures in the industry, by her peers as well as her fans. Frank Capra once said, "In a Hollywood popularity contest she would win first prize hands down."

Let's take a look at some fascinating facts about the entertainment titan. 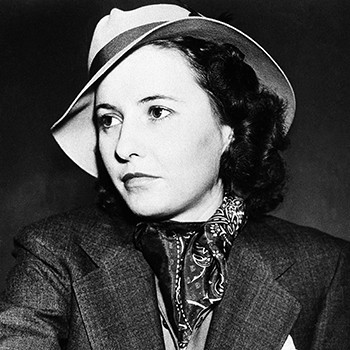 At the age of 14, after completing the eighth grade at P.S. 152, Ruby decided to get a full time job instead of matriculating onward to Erasmus Hall High School. The teenager worked as a switchboard operator, a file clerk, a package wrapper at Abraham & Straus, and at the Vogue Pattern Center. There is still some confusion about her education, as even an Erasmus Hall alumni page lists Stanwyck, as well as the school's Wikipedia page.

2. She became a Ziegfeld's Follies dancer at the age of 15. 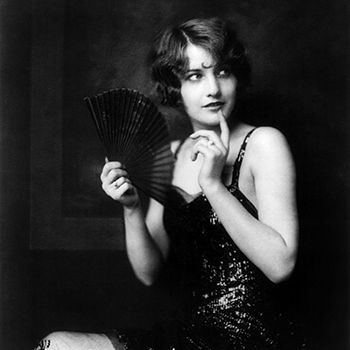 She was hired under the name Dolly Evans. In the 1922 Follies revue, the soon-to-be-Stanwyck danced in a ballet scene called "Frolicking Gods," which was a bit like those Night at the Museum movies.

3. Her crime film 'Night Nurse' was one of the films that led to the Motion Picture Production Code. 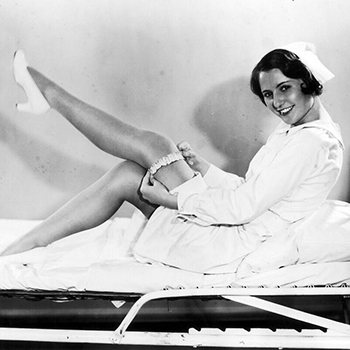 In 1934, the Production Code, also known as the Hayes Code, began to be strictly enforced in Hollywood, a way to try and clean up "indecency" from movies. Everything from profanity and drug use to childbirth and interracial relationships were white washed from movies. Everything needed a happy ending. What spurred the puritanical policing were gritty flicks like Night Nurse, which featured Stanwyck in lingerie, the attempted murder of children, and a dead Clark Gable at the close. Ironically, the staunchly conservative Stanwyck would become a member of the Motion Picture Alliance for the Preservation of American Ideals and support the blacklisting House Committee on Un-American Activities.

4. She truly went blonde for just one role, Stella Dallas. 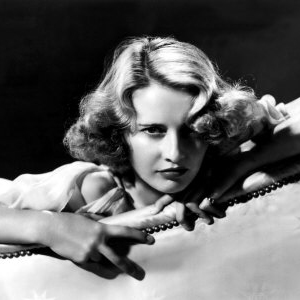 Stanwyck bleached her hair once, for the lead in 1937's Stella Dallas, a film so popular it spawned a radio soap opera that ran for two decades. In other roles in which she played a blonde, the actress would wear a wig. Most notably in a brilliant classic…

5. Billy Wilder intentionally dressed her in a terrible wig for 'Double Indemnity.'

For what is arguably the greatest noir film ever made, director Billy Wilder opted to slap a shoddy, cheap wig on his beautiful star. Critics moaned that the piece was too fake, but that was Wilder's intent. Wilder wanted "to make her look as sleazy as possible." 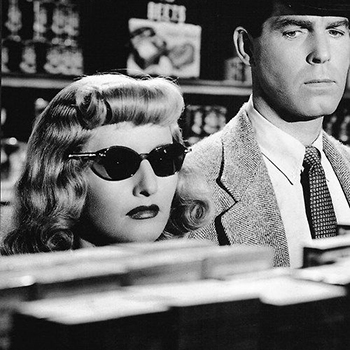 That wig was the only thing cheap about Stanwyck in 1944. She was named the highest earning woman in the land, raking in $400,000 that year. To put that in perspective, that's approximately $5.4 million in today's cash, a third of what Reese Witherspoon earned last year.

7. William Holden remained forever grateful to Stanwyck for his career. 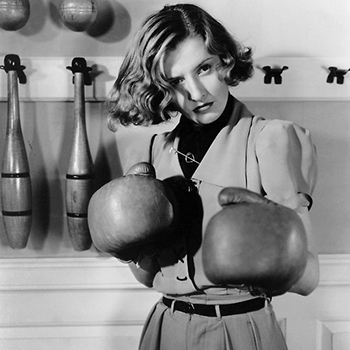 Producers were more than reluctant to cast the unknown Holden as the lead in the 1939 boxing flick. Stanwyck insisted on his casting. Holden earned the role of the violinist-pugilist, and remained so grateful to Stanwyck, his first big role, that he reportedly shipped her flowers every year to mark the anniversary of the first day of the filming. Four decades later, at the 50th Academy Awards, Holden and Stanwyck were presenting a Sound Oscar, when Holden publicly thanked her for all she did in a tearful, eternal moment. 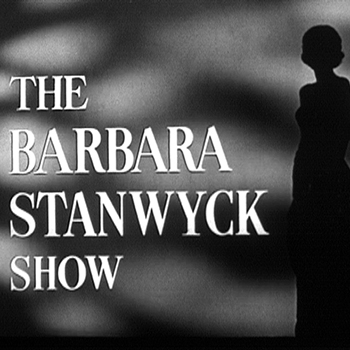 In the 1960s, the star turned to the small screen. Her first television gig, The Barbara Stanwyck Show, was an anthology show, but also a vehicle that repeatedly attempted to set up the actress with another series. In one concept, she was an American running an import-export shop in Hong Kong. Somehow, none of these were picked up by the network as full series. Though it lasted just a season, the show earned Stanwyck her first Emmy.

9. She was a big fan of author Ayn Rand. 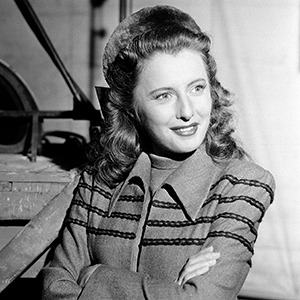 A believer of objectivism, Stanwyck pushed for Warner Bros. to purchase the rights to the novel The Fountainhead, which was a slow seller in its first few years in print.

10. Victoria was the only member of the Barkley family to not get shot on 'The Big Valley.' 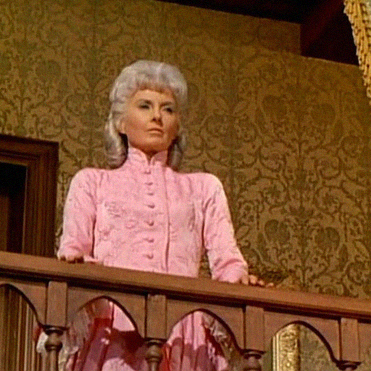 Heath was hit the most, and Nick has the unfortunate honor of being the only Barkley who is shot twice in the same episode.

11. She was in a 'Dynasty' spin-off with Charlton Heston and Ricardo Montalban. 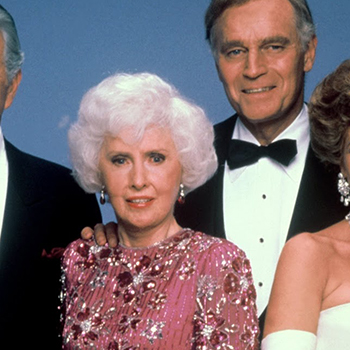 Produced by Aaron Spelling, the primetime soap The Colbys featured a stellar cast, yet the Dynasty spin-off only ran from November 20, 1985 to March 26, 1987. In the final episode, one of the Colbys is abducted by aliens.

12. Her ashes were scattered over Lone Pine, California. 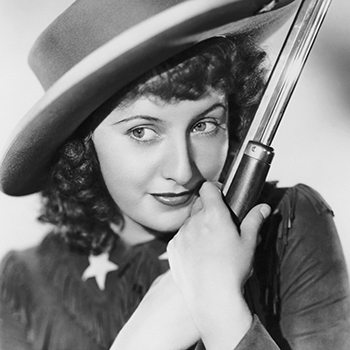 Though she was everything from a dancer to a femme fatale, Stanwyck remained a cowgirl at heart. She requested no funeral, no burial upon her death. Instead, her ashes were scattered over Lone Pine, California, the rustic setting for dozens of Hollywood Westerns.

mawagner 6 months ago
You forgot about her major role as Rachel Ward's mother in The Thorn Birds in 1983 where she was lusting after the priest, Richard Chamberlain.
Like Reply Delete

SFocosi 6 months ago
Your Bio-pic forgot her most endearing Christmas/New Years' movie roles as the news-woman reporter in Frank Capra's MEET JOHN DOE where she had to play a writer wo had to save her job by Chastising a person who would commit suicide by jumping off a high-rise building at the time, where he then becomes like a cult-leader to many an adoring fan by her words. Not much unlike today, but Trump was born rich, & he does not need constituents helping his case; he won & lost, by hook & crook. Another Capra blacklisted movie ahead of its time because it exposed politics soft under-belly.
Like Reply Delete

rkainne 6 months ago
It's interesting how they left out the part of her homosexuality. This was a very difficult period of time when everything that wasn't Hayes coded (I know Breen was the author but it is widely known as the "Hayes Code") and therefore a vehicle for conservative values was a career destroyer. Still, to prove gay people are like everyone else and not all liberal, her mind was as closed as her closet.
Like Reply Delete

AngeliaKim rkainne 2 months ago
So what? I will take her over ANY ACTRESS of Today!
Like Reply Delete

Donald 6 months ago
The beggining of Mccarthyism started in DC, but only gained traction in the even then extremely powerful liberal left Hollyweird elites leant a hand. I loved Big Valley. But also knew that Stanwyck was no naive little school girl playing a wholesome mother. She had a huge part in black balling several people out of hollywood. She was the most powerful woman in Hollywood and she used that power negatively an viciously.
Like Reply Delete

SteveThames 6 months ago
Much preferred big valley to bonanza; similar shows go me ; Heath was my fav; lost Richard long much too soon
Like Reply Delete

dangler1907 6 months ago
Phew. Ayn Rand lover and a "commie hunter"/blacklister? No wonder I never cared for that woman.
Like (3) Reply Delete

RobertEgloff dangler1907 6 months ago
Too bad you never cared for her. She was an accomplished, brilliant actress. I've never seen her in a movie or TV role, where she didn't excel.
Like (1) Reply Delete

Debby dangler1907 6 months ago
Yes I read this about her years ago. She like a few others turned against her fellow performers when she involved herself in the Red Scare and the House Committee on Un-American Activities. She was an OK actress but I personally never liked her.
Like Reply Delete

Debby RobertEgloff 6 months ago
She was an OK actress but there is more to her that that. Too bad mostly negative.
Like Reply Delete

F5Twitster 6 months ago
"In 1934, the Production Code, also known as the Hayes Code, began to be strictly enforced in Hollywood..."

It's official name was the Breen Code, after Joseph Breen, who drew it up and and administered.

"Producers were more than reluctant to cast the unknown Holden as the lead in the 1939 boxing flick."

The writers of this piece seem not to know that that film actually has a title: "Golden Boy."
Like (1) Reply Delete

obectionoverruled 6 months ago
Her role in Double Indemnity was unforgettable. The scene in which she surreptitiously meets her lover Fred MacMurray between the shelves in the supermarket is a classic. She was a natural, unlike more lauded actresses such as Bette Davis, Joan Crawford and Katherine Hepburn, say, because she didn’t have to ‘act’. She played herself and her roles became her, not the other way around.
Like (1) Reply Delete

AgingDisgracefully 6 months ago
Tough chick. How tough?
Two of her three sons on Big Valley were made of Samsonite.
Or so I've been led to understand.
Like Reply Delete

Cowgirl 7 months ago
She was a very interesting lady & I'd like to learn more about her. I always enjoyed watching her in The Big Valley. I wish MeTV would have used a better picture at the top of this story. The one they picked is awful. The Big Valley was on for 4 years, so they could have used a picture that didn't have a pink tinit to it.
Like Reply Delete

AnnieM Cowgirl 6 months ago
The Ziegfeld photo is beautiful.
Like Reply Delete

TheDavBow3 15 months ago
A very interesting lady.
Like Reply Delete