Before Chester Cheetah, there was this Cheesy Rider. 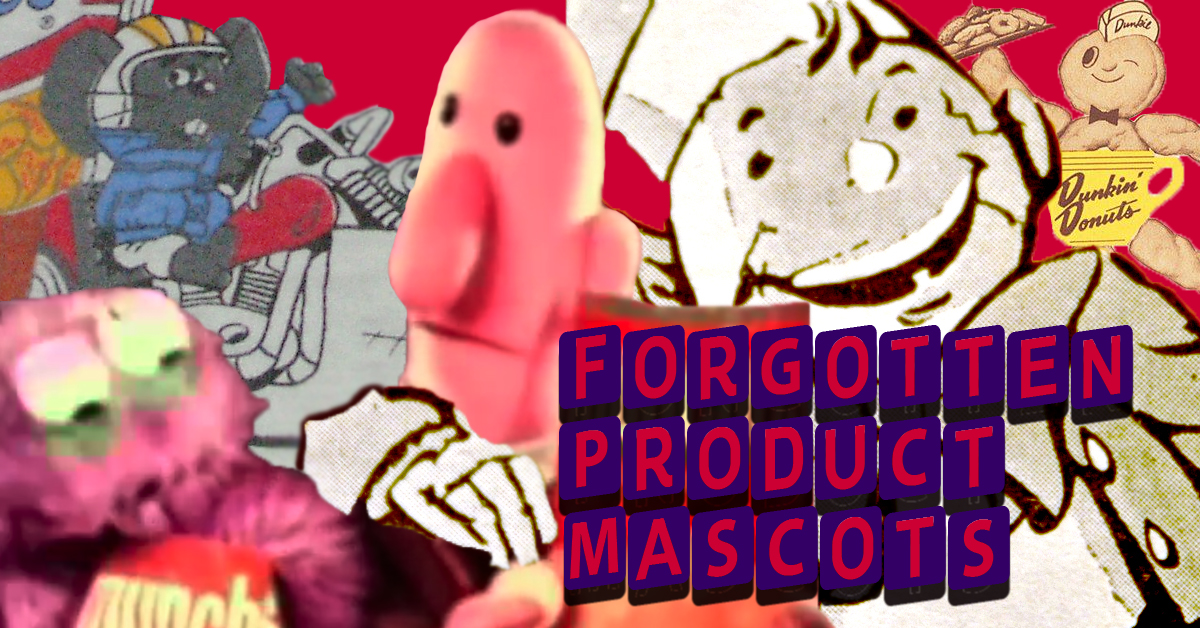 Mascots are a funny beast in the marketing business. On the one hand, the right mascot can lead to instant recognition and customer loyalty for a lifetime. Just ask legends like Tony the Tiger or the Pillsbury Doughboy. But on the other hand, once a mascot is retired, it seems like time has no trouble forgetting some of these faces that are intentionally designed to stick with you. 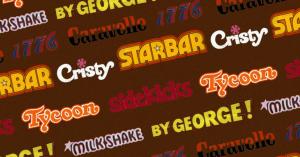 19 chocolatey candy bars from the 1970s that went extinct

Here, we trace the timeline to rediscover all those mascots that time forgot, including some of the earliest characters created for brands like Cheetos, Nestle, Dunkin Donuts and more. From cowboys "gumfighters" to "cheesy" riders, we're guessing these gimmicks will give you a laugh, if not flood you with a rush of memories of all those commercials that slipped your mind until now. 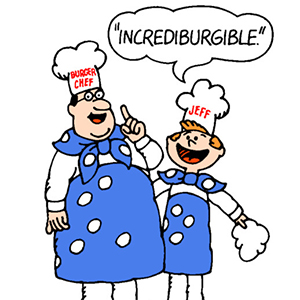 Defunct burger chain Burger Chef had two mascots, but most people just remember the guy whose name was on the building. Burger Chef was such a big deal that famous voice actor Paul Winchell (who voiced Tigger and Gargamel, among others) was tapped to bring the character to life. Fewer recall that Burger Chef had a sidekick: Burger Jeff. Jeff mostly appeared in games you played on the side of your funmeal in the '70s. 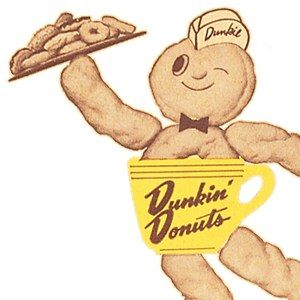 In the mid-'50s, before Fred the Baker told us it was "Time to make the donuts," there was Dunkie. Comprised of varied donut shapes with a coffee cup torso, Dunkie's wink suggests he's found a loophole the Gingerbread Man would've liked to have discovered when he was running from all those sugar-crazed folks who would likely dunk either icon in their coffee. 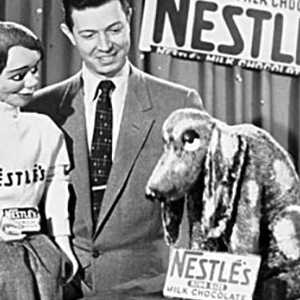 Sing it with us: "N-E-S-T-L-E-S, Nestle's makes the very best." Farfel the Dog is one part of the act that debuted this famous jingle. From 1953 to 1965, Farfel appeared in commercials alongside ventriloquist Jimmy Nelson and his human dummy Danny O'Day. It's likely '90s kids remember the dog, too, though. He was so popular that Nestle later revived the mascot in a special Christmas promo. Jerry Seinfeld even named a dog after Farfel in his hit '90s show. 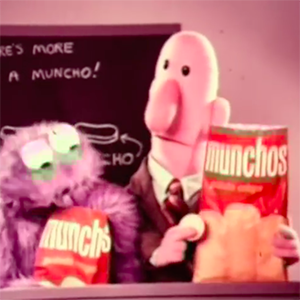 Everybody knows the fuzzy guy in this 1969 commercial spot created (and starring!) Jim Henson. This famous commercial for Fritos' Munchos chips debuted the Muppet that went on to become Cookie Monster. In the spot, though, he's just called Arnold. Sometimes Arnold is voiced by Henson and other times by Franz Oz, but the scholarly mascot Fred was both created and voiced by Henson. 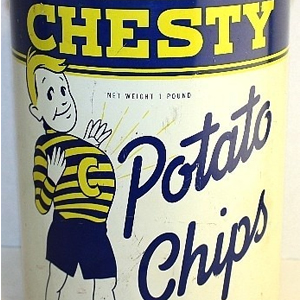 Chesty Potato Chips may not be familiar to most folks, but the chip eventually morphed into one of America's best-loved chips: Ruffles. The Indiana potato chip company relied on a mascot called Ruffles the Clown, but on its packaging, this little guy stuck his chest out, maybe a bit prematurely proud of the legacy the potato chip inspired. He was called Chesty, of course, and he was the face on the potato chip cannister back in the '40s. 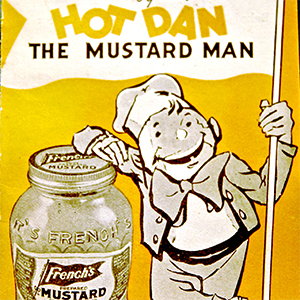 French's incorporated Hot Dan the Mustard Man into its print advertising in the 1940s and '50s, but little is known about the weird mascot's origins. With his big bowtie, he was even featured in comics the company made where he was instrumental in helping families slather mustard on boring food. You know, to make it more fun! 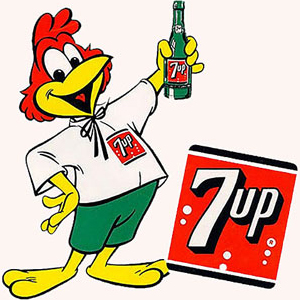 Here's a Disney character you probably rarely think about: Fresh-Up Freddie. The mascot was a product of a partnership in the 1950s between Disney Studios - who created the character - and Leo Burnett Agency - who created the 7-Up campaign that served as the sponsor for the Mouse's popular Zorro series. Voiced by "The Man of a Thousand Voices" Paul Frees, Freddie's cartoons were deceptively as funny as similar-looking Disney shorts. Watch Freddie solve everybody's beach party problems by showing up with plenty of 7-Up to combat that "sandy feeling in your throat." 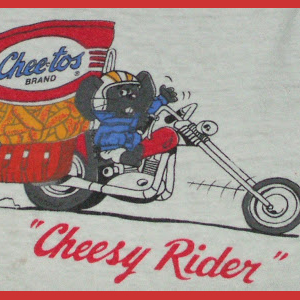 Step aside, Chester Cheetah, and make way for your predecessor, the Cheetos Mouse. The '70s mascot for the cheese puff company took on cool characters like "Cheesy Rider" or "Julius Cheeser" and made a whole lot more sense being driven wild by the cheesy flavors of the fan favorite snack food. But Chester just had his own vibe, and when he was introduced in the '80s, the Mouse disappeared without a squeak of explanation. 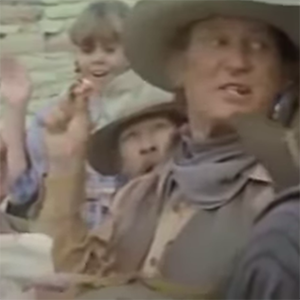 Wrigley launched its Hubba Bubba gum line in 1979 with a campaign that featured a distinctly Western theme. Their very first TV mascot was known as "the Gumfighter," whose catchphrase was "Big bubbles, no troubles." 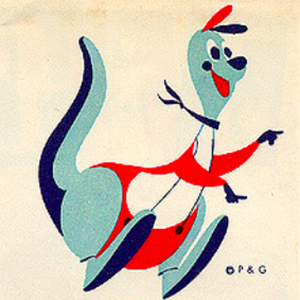 When Jif debuted in 1958, the peanut butter did not arrive on shelves, but in trucks that were branded with this blue and red kangaroo. He's called Jifaroo, and he's the company's initial mascot. The trucks were part of a promotional campaign to hand out free samples and get people jumping up and down about Jif. 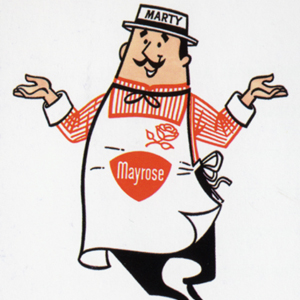 If you were aching for Mayrose bacon (or those little brown and serve sausage) back in the 1970s, it's likely you encountered this friendly neighborhood butcher, Marty Mayrose. He was the mascot for Mayrose Meats, a division of Swift & Company, created by J. Joseph Horan. Horan's famous jingle that Marty Mayrose sang in a low baritone still rings in the hearts of Mayrose fans, "I'm a meat man and a meat man knows, the finest meats, ma'am, are Mayrose." 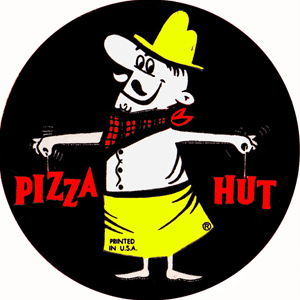 Pizza Hut relied on Pizza Pete to entice hungry customers to crowd under its famous red roof when the fast food chain was founded in 1958. But after a couple decades of seeing the guy on their plates and cups and whatnot, the company took a left turn and decided against using any mascot, favoring its iconic red roof as its sole branding element. So after all those years of faithful service, Pizza Pete was retired by the time the '70s ended. 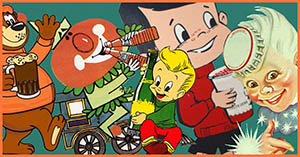 Do you remember Rooty, Oaf and Perky? Read more.

rmadara 11 months ago
How about Jose the Monkey on Cocoa Krispies....late 1950s? One of my earliest memories
Like Reply Delete

Mac2Nite 14 months ago
I did remember Farfel the Dog 😊👍 for Nestles!
Like Reply Delete

WF 14 months ago
Now c'mon, who could forget the Jifaroo and Farfel? The others, OK, although I do vaguely remember Fresh-up Freddie in the late 1950's. I saw the Jifaroo quite a bit, me being a big fan of peanut butter, but I only remember seeing Farfel on Saturday mornings. The whole jingle wasn't presented above. It actually went "N-E-S-T-L-E-S, Nestle's makes the very best." Then Farfel said "Choc -- late" (drawing the word out over 2 or 3 seconds) ... and followed by a "Snap!" (that being Farfel's mouth snapping closed). Even my Dad liked to repeat that one.
Farfel and the Jifaroo must have been around until at least the mid 1960's.
Like Reply Delete