From the Kool-Aid Man to the Sun-Maid Girl, time changes everything. 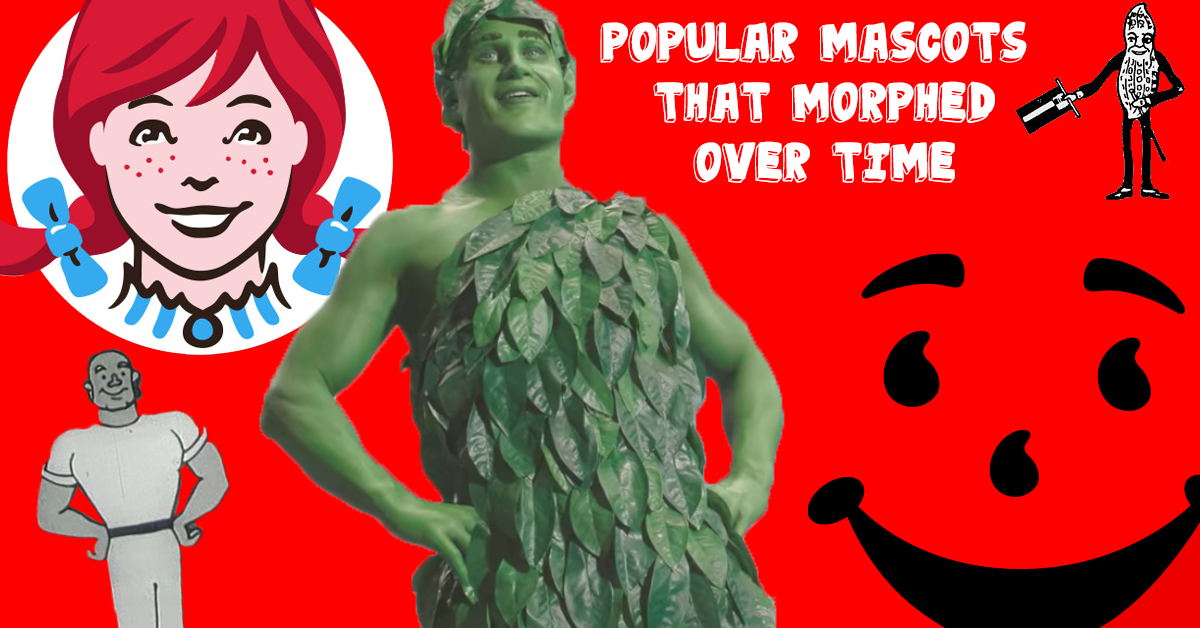 "Ho, ho, ho!" laughs the Jolly Green Giant in ads most of us have seen since we were kids. But, think back to the last time you saw the leafy hero in action. If you can't remember, you can hardly be blamed.

The character was retired for a long stretch of time and only recently came back to commercials "after a long journey," the company explains.

Since the giant's big comeback, we've been thinking about how many of our favorite brand mascots have changed over time, either fading out of our memories as their campaigns have been phased out or quietly being updated to take new forms that can occasionally confuse us in the grocery aisles.

Below, we've compiled 11 widely recognizable mascots that have dramatically morphed from their initial concepts. See how many original designs you can remember. 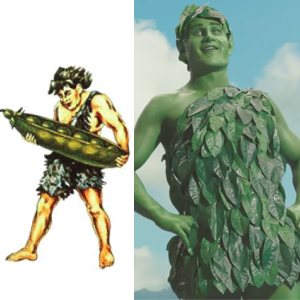 Green Giant's mascot was not so jolly when he was first introduced in the mid-1920s, with a caveman-like appearance and a firm scowl on his face. The Jolly Green Giant as we know him now debuted in 1954, but he has notably not been used in more recent advertising — until recently. The Jolly Greent Giant has made his return, and parents everywhere hope his kind eyes convince kids that canned veggies are a good thing. And yes, he's still passing off "Ho, ho, ho!" as his own tagline, after all this time. We're sure that other famous jolly mascot doesn't mind. 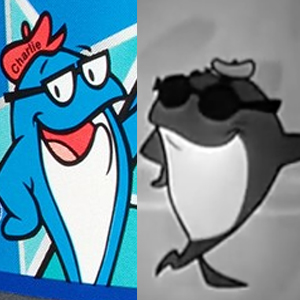 Charlie the Tuna first appeared in 1961, wearing a beret and shades to show he was totally hip. He stayed that way until the 1980s, when Charlie took a break, retired by Starkist until his return in 1999. At that point, being cool was not Charlie's priority. Instead, he wanted to convince folks he was smart, which is why his shades turned into thick-rimmed glasses. His image has remained that way through ad campaigns today. 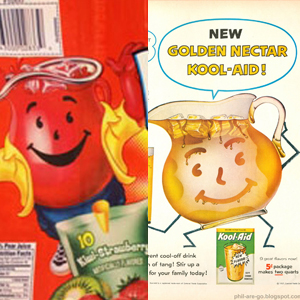 The Kool-Aid Man smashed into our sphere in 1954, originally drawn with stick-figure limbs that have filled out over time enough to necessitate jean shorts, a yellow shirt and sneakers. Most recently, Kool-Aid looks to be going back to a more stripped-down concept for the walking, talking pitcher with a smile forever plastered on his face, giving him sleek glass arms and legs filled with the cherry-flavored goodness that remains Kool-Aid's most popular flavor. 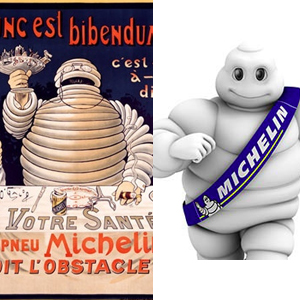 We know him best in the U.S. as the Michelin Man, but the puffy anthropomorphic stack of tires was originally named Bibendum when he was first introduced in 1894 in France. Over time, the Michelin Man's grown much friendlier than his sorta-scary, spectacled initial image, now sporting wide eyes and a confident grin. 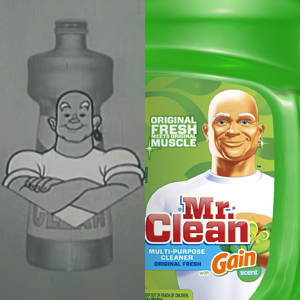 Mr. Clean first appeared in 1957, and though he remains as serious as ever about the work he does, it's cool to see how the bald strongman has evolved over time. The logo we all know now features the same bushy eyebrows, the same clean white T-shirt, and the same single hoop earring, but it also brightened up Mr. Clean's eyes and added a glint to his golden earring — just in case you thought there might be anything even slightly not polished about the character. 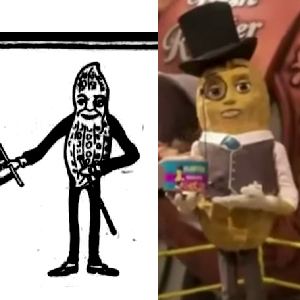 Mr. Peanut is a lot like Mr. Clean in that his image hasn't changed so much as it has inched through multiple updates over the years. The current Mr. Peanut has gotten slightly more casual, dropping his tuxedo jacket in favor of a neat vest over a white button-down and tie. As long as the top hat and cane stay, we can be good, Mr. Peanut. 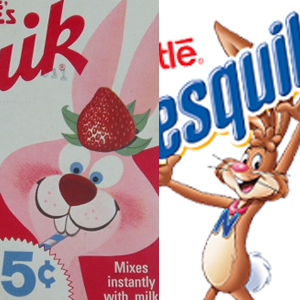 Nesquik has had several mascots since the product came out in 1948, but Quicky, the Nesquik bunny, is probably the most memorable. Sometimes called the Quik Bunny, Quicky hopped onto the Strawberry-flavored Nesquik packages in 1973. Back then he was pink. Now we know him better as the chocolate-brown bunny with the bushy white tail that was reconcepted in the 1990s by Ramon Maria Casanyes, the same artist responsible for the Cookie Crisp wolf. 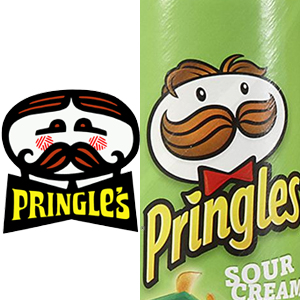 When Pringles debuted in 1967, they decided to put the chips in a can to deal with customers who complained about the air in bags of chips. On their cans, they printed the mustachioed mascot, with an original design that featured slightly spooky red eyes over burning red cheeks. Fans of the chips know that eventually the Pringles man lost his rosy cheeks in 1996, and today he's lost his eyebrows too. With a cheery face that's angled up now, it's hard not to meet his eyes each time you pop open a can. 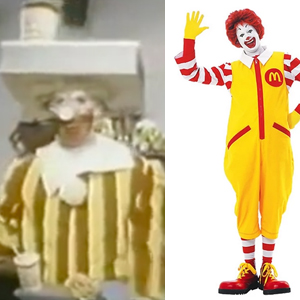 Speaking of slightly scary, if clowns freak you out, you might want to scroll past this one. The original Ronald McDonald was portrayed by Willard Scott, a clown who later became better known as a TV personality on The Today Show. Scott appeared in commercials as Ronald McDonald three times in 1963. Since then, there have been 12 others to fill Ronald's shoes, and the character is currently portrayed by actor Brad Lennon. 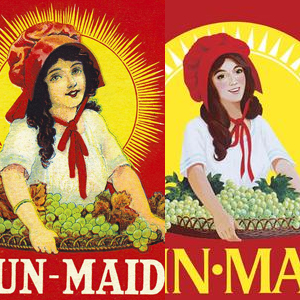 In 1915, there wasn't just one Sun-Maid girl, but many who worked events handing out boxes of the popular raisins so folks could sample them. The one who ended up on the original packaging, though, was Lorraine Collett, a model and actress. From there, her image would get updated by artists, first in 1956, and then again 1970 when artist John Lichtenwalner brought in a new model, actress Liz Weide, to pose for his take on the mascot. This version remains the Sun-Maid girl we see on the company's raisin boxes today. 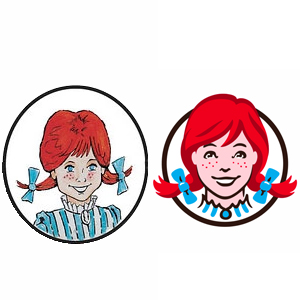 Most folks know that the original Wendy was Wendy's founder Dave Thomas' daughter, whose likeness was artistically rendered in 1971 to serve as his fast food chain's logo. Over time, the logo has been slowly simplified, dropping features from Wendy's dress and washing out shading from her face to transform her into the flatter icon we see on Wendy's signs today. 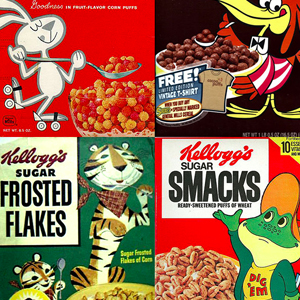