Where To Watch Shop Store Contact
Home / Stories / 10 minor goofs you never noticed in 'Star Trek'
Did you know?

They'll still make ships out of wood in the 23rd century. 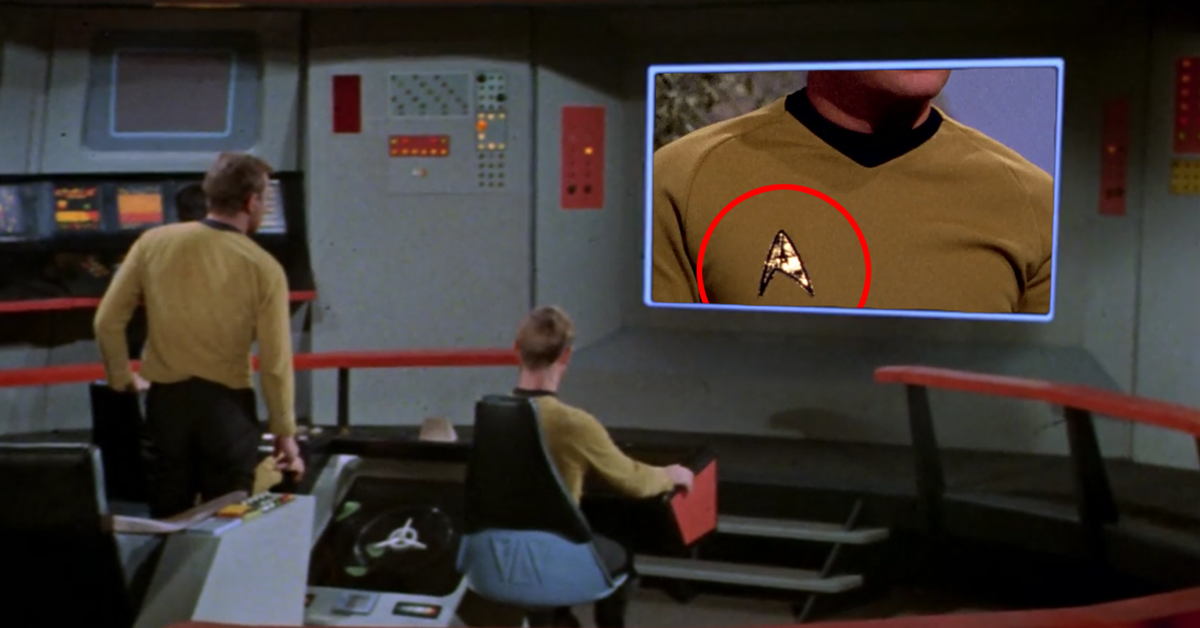 Spock had the ultimate analytical mind. But even a Vulcan can overlook some minor details. Or, to be fair, the Vulcan's creators can.

It's no secret that Star Trek: The Original Series worked with a limited budget. Yet part of the show's brilliance was in how the production brought to life so much with so little. There was cheap, ingenious use of everyday materials in the props, from the 29-cent Magic Slate toy in the Captain's Log to the everyday office furniture found on the Enterprise. Desilu Productions effects master Joe Lombardi whipped up loads of cheap, clever props.

Still, some errors inevitably made it onto the screen. There was no hiding the stunt doubles with computer technology, and the shadow of the boom microphone appears in too many shots to list here. Here are 10 of our favorite minor mistakes. In a way, they somehow make the entire series more impressive, once you realize the materials they were working with. 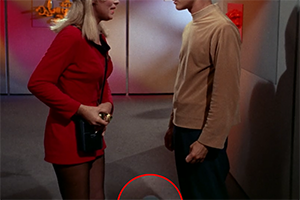 While the shadow of the boom mic can be often spotted on walls or in reflections, it does actually creep onto the screen in a few rare occasions. When Charlie catches up with Rand in the corridor to give her a present, the tip of the gray boom pops into the frame ever so subtly. 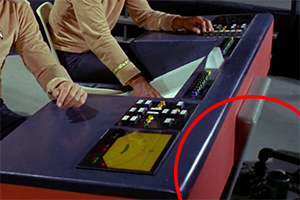 "Where No Man Has Gone Before"

Early in the episode, when helmsman Gary Mitchell calls guest star Sally Kellerman a "walking freezer unit," piping and rigging from the set can be seen in front of the bridge console.

3. The edge of Galileo 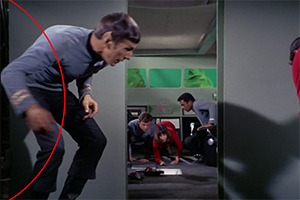 The edge of the facade is briefly revealed as the frame shakes aboard the shuttle. You can briefly see a bar of black behind Leonard Nimoy and a flicker of the surrounding set. 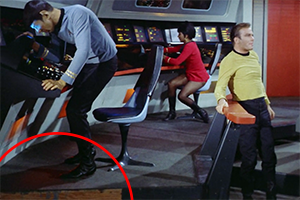 In the opening, as the Enterprise is attacked by a Klingon vessel, you can see that the floor behind Nimoy has not been painted. The bare wood is exposed on the elevated part of the bridge.

5. Shouldn't you be meditating, Spock? 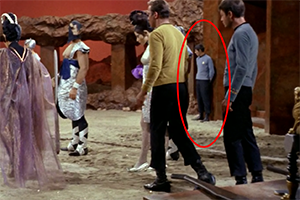 In the middle of this classic season two opener, Spock enters a meditative state called plak tow. We see close up shots of him deep in the trance, with his hands clutched before his face as his eyes practically roll back into his skull. However, after T'Pring chooses Kirk as her champion, there is a cut to a wide shot. In the background, you can see Leonard Nimoy waiting around with his hands behind his back.

6. Batten down the bridge!

In the prologue, when a green bolt of light slams into the Enterprise — Red alert! Here we get a taste of that classic disaster technique of shaking the camera as the cast flails around on set. However, it must have been a pretty hard blast, as the helm console lifts off the floor. 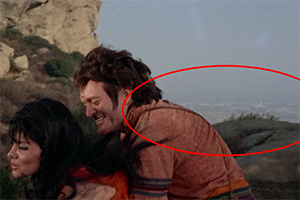 The gang is on the primative planet of Neural. In the final act, Nona is being attacked by some tribal toughs, who look a bit like Daniel Boone in pastel pajamas. She tries to use Kirk's Phaser against her attackers. As they struggle, Los Angeles can be seen off in the distance in the smog. 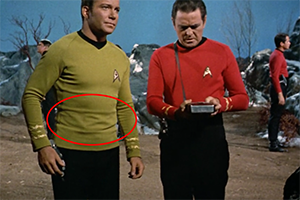 At the start of the third season, the cast received some new Starfleet uniforms. Out went the velour. The new tunics were a much tighter double knit material. In the season opener, the much derided (and underrated) "Spock's Brain," when the crew beams down, you can clearly see William Shatner's tummy-squishing girdle under his top. 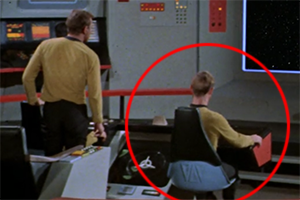 "Let That Be Your Last Battlefield"

After the red alert, as the Enterprise is on a collision course with an invisible ship, there is an insert shot of some stock footage. Chekov has suddenly disappeared, replaced by a redhead with a long neck. Who is this guy? No worries — Walter Koenig is back in the next shot. 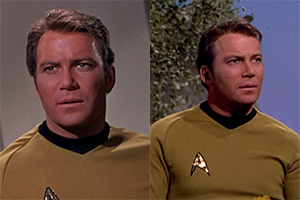 "The Way to Eden"

You remember the episode with the space hippies, right? Midway through, as Kirk exits the sick bay, there is a close-up shot of Shatner. The image has been clearly flipped, as his uniform insignia has jumped to the wrong side of his uniform, in reverse. Later, outside the shuttle on the planet surface, it happens again. 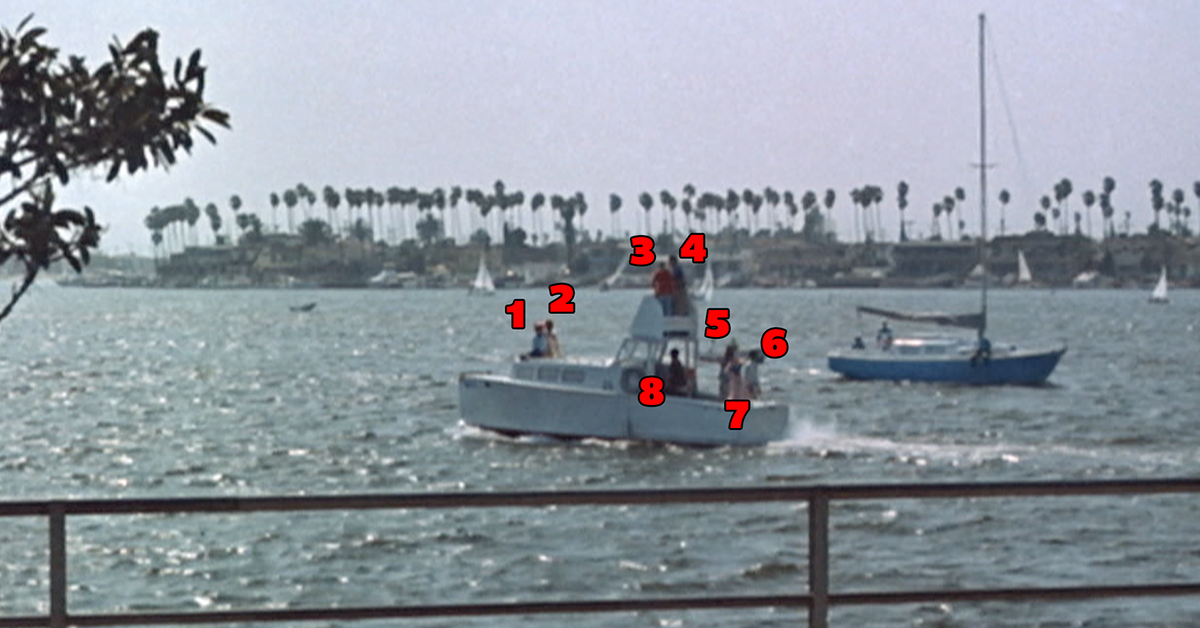 TonyClifton 18 months ago
You guys missed the third season episode (I forget the name) where Kirk is about to climb a ladder and he's blown back by an explosion, and his toupee totally flies up revealing his bald head. We loved running that over and over on Blu Ray!
Like Reply Delete

Squiggy TonyClifton 5 months ago
Wouldn't such a scene have been handled by a stunt double?
Like Reply Delete

RedjacArbez 27 months ago
What about The Cloud Minders .... We see Plasus beaming down and he is on the right...When he fully materializes he is in the middle.
Lots of mistakes like that and ya I noticed them all...Try watching something and look only for errors...do not follow the story...look for mistakes....
Like Reply Delete

BobD 28 months ago
Did everyone forget about the classic "hand closing the shuttle door" from "The Galileo Seven"?
Like Reply Delete

Prof_Trudo 35 months ago
In “Space Seed,” when Kirk, Spock, and McCoy revive Khan, a phaser falls to the floor and Deforest looks to it wondering if the director will yell “cut” because of the prop malfunction
Like Reply Delete

RobChapman Prof_Trudo 27 months ago
TNG: Skin of Evil has a similar blooper. In one scene Geordi's phaser falls of his waste and lands in the black goo.
Like Reply Delete