The football tough guys made the leap to comedies, action shows, westerns and outer space. 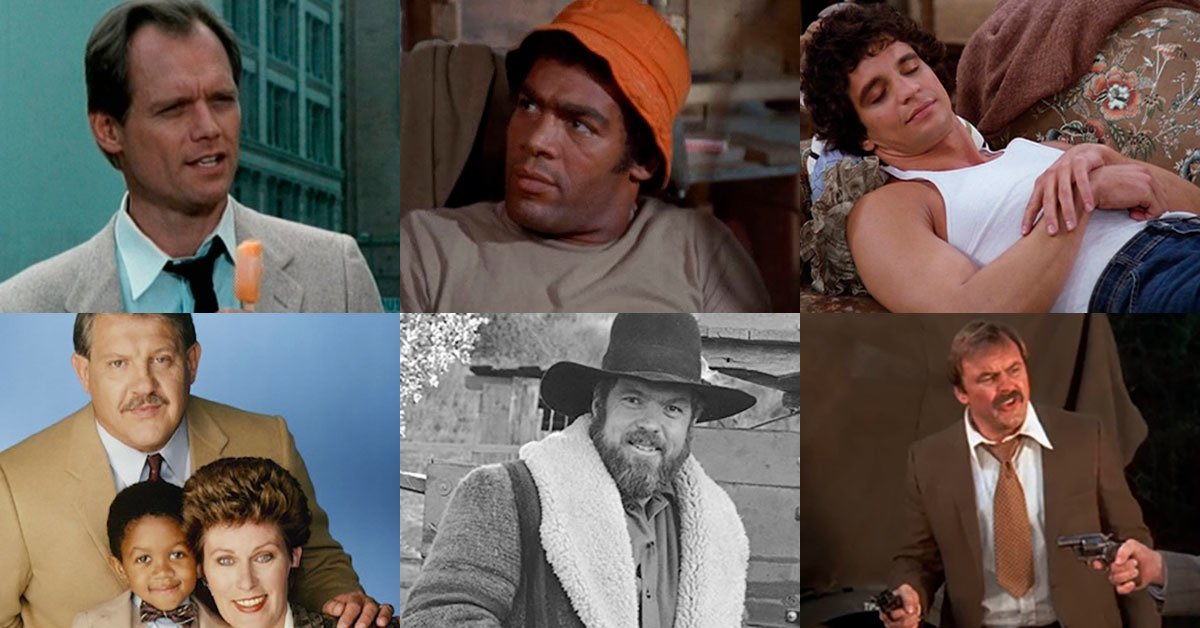 Football players have many opportunities to hone their acting skills, whether its intimidation tactics on the field or acting in television commercials. A handful of gridiron stars make the permanent leap to the screen, especially those fortunate to play in Los Angeles. Some made a natural transition to muscle and henchmen, but others showed their range as comedians and tender father figures.

Here is a formidable team of former NFL stars who became television pros. 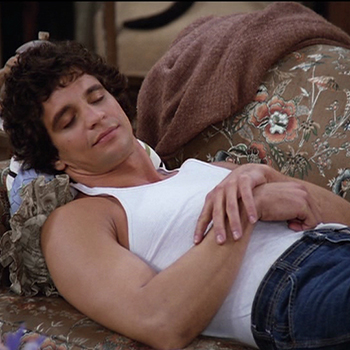 After America's two favorite beer bottlers relocated from Milwaukee to Burbank, the producers of Laverne & Shirley attempted to write a love interest for Laverne. Enter Marinaro as stuntman Sonny St. Jacques. Often showing off his upper body, the former running back left the sitcom after a season for a major role on Hill Street Blues. Later, he could be seen on Falcon Crest, Blue Mountain State and more. 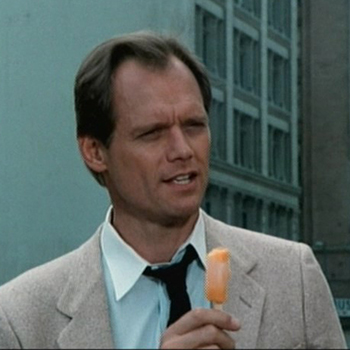 Perhaps no former player become a bigger TV lead than the Ram. After starting his career on the Giants, Dryer played most of his years in L.A., which perhaps gave him a shorter road to Hollywood stardom. He appeared in a backdoor pilot on CHiPs about ninja cops, "Force Seven," but that show was not picked up. No worries. He became an action star shortly thereafter as renegade cop Rick Hunter. In the '90s, he lead another series, Land's End. You can also catch him on a handful of Cheers. 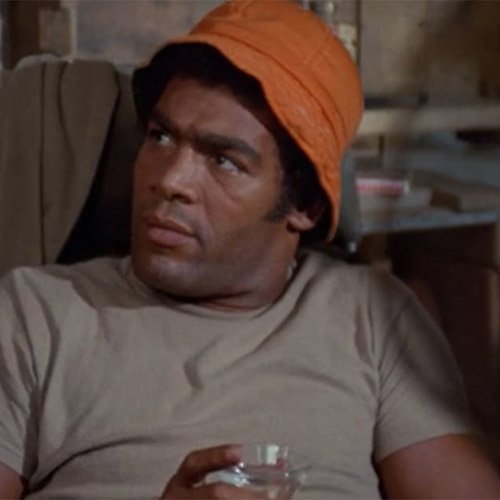 Running back Timmy Brown played his final NFL game as a member of the Colts in Super Bowl III. The former Pro Bowl selection played most of his decade-long career with the Philadelphia Eagles. He did not wait until his retirement to make the leap to acting. In 1967, as he was starting his final season with the Eagles, Brown appeared in the season-three premiere of The Wild Wild West, "The Night of the Bubbling Death." He played a character spectacularly named Clint Cartwheel. Speaking of names, Timmy Brown eventually opted for the more formal Timothy Brown as an actor, in part to avoid confusion with fellow athlete-thespian Jim Brown. A few appearances on Adam-12 followed, which then led to his biggest role yet, a regular series gig on M*A*S*H. Brown took the role of Dr. Oliver Harmon "Spearchucker" Jones, a significant character in the novel that only appeared in the first season of the sitcom. He took the role over from Fred Williamson, another NFL star who appeared in MASH. 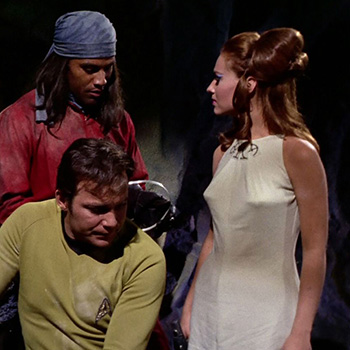 Like Smith, Williamson is mostly a star of the silver screen, a legend of Blaxplotation cinema and regular cool presence in action flicks. He also might be the only former NFL player to appear on Star Trek, in the season three episode "The Cloud Minders." That's him as the Troglyte named Anka. Also, who wasn't in Half Nelson? Did anyone see that show? 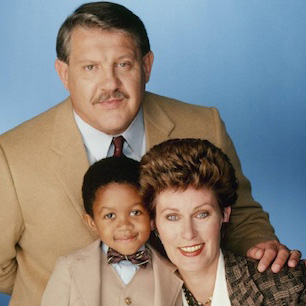 Karras appeared on both big screen and boob tube. You might remember him as Mongo in Blazing Saddles. On TV, he began on Daniel Boone, joining the cast for one episode alongside Rosey Grier. He also popped up on an Odd Couple and M*A*S*H, but most know him as George Papadapolis, the dad on 150 episodes of Webster. 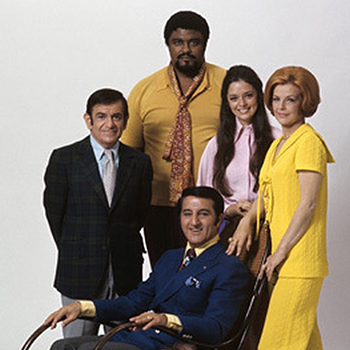 Another standout for the Giants and Rams — perhaps there is a benefit for aspiring actors playing in NYC and L.A. — Grier, brother to actress Pam Grier, started with bit parts on The Man from U.N.C.L.E., I Dream of Jeannie and The Wild Wild West. He became a regular on Daniel Boone as Gabe Cooper in the sixth season, and later teamed with Danny Thomas as a piano player in the sequel series Make Room for Grandaddy. 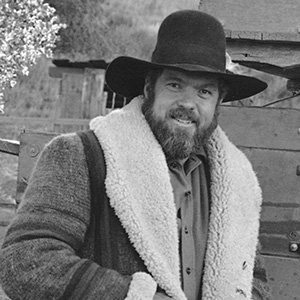 The former fearsome defensive tackle became a kind soul on frontier shows. On the latter seasons of Little House, he portrayed farmer Jonathan Garvey. In one memorable moment, his onscreen son proclaims, "My pa doesn't know anything about football!" Later, he was the lead role on Michael Landon's Father Murphy, sheltering orphans and pretending to be a priest. 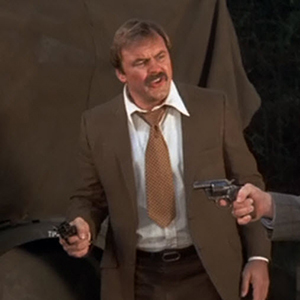 The erstwhile Monster of the Midway got his acting start in 1974 as a guest on Emergency! and later that decade appeared in episodes of The Rockford Files, Wonder Woman (pictured), Taxi, Fantasy Island and more. In the '80s, he became a lead, as "Ski" Butkowski on the helicopter action hour Blue Thunder and later in a Joe Pesci comedy called Half Nelson, alongside another ex-NFLer, Bubba Smith.

Smith is best known for his reoccurring role in the Police Academy movies, but he had many television gigs as well. He was with Butkus in both Blue Thunder and Half Nelson. His sitcom about a convenience store, Open All Night, last just a season. Prior to that, he popped up in an episode of Wonder Woman, as you can see in the photo, playing "Rojak" — not to be confused with Kojak. 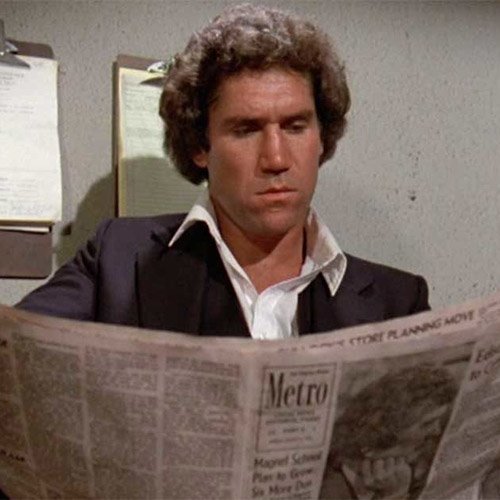 One played basketball, the other football. Roommates at the University of Southern California in the 1960s, both Tom Selleck and Tim Rossovich would go on to fame, albeit on different paths. Selleck became Magnum, P.I. Rossovich, meanwhile, stuck to sports. After being selected by the Philadelphia Eagles in the first round of the 1968 NFL draft, the linebacker went on to a Pro Bowl career. Due to his stature, the towering athlete often played the muscle on television shows. He got his onscreen start in early 1978 on Charlie's Angels. Weeks later, he could be seen as a bodyguard on Soap. More roles quickly followed. He was a driver and thug again on Charlie's Angels, as seen in the image up top, and played a both a "Warehouse Thug" and "Beast Man" on Wonder Woman. After growing a distinctive mustache — much like his old roommate — Rossovich became a familiar presence on series as varied at The Love Boat, The A-Team and ALF.

Gingerbaby 14 months ago
I think that it is great that these guys found work on TVafter their football careers were done. I feel bad for Merlin Olson died of lung cancer or mesothelioma.
Like Reply Delete

15inchBlackandWhite 14 months ago
Fred Williamson was also briefly in the Monday Night Football booth after Don Meredith left. He didn't last too long though.
Like Reply Delete

JHP 14 months ago
Alex Karras was GOLDEN in mash...so so funny in my top 10 funny ones for that series
Like Reply Delete

rgutierrez1968 14 months ago
Not mentioned was Joe Kapp. He played football at UC Berkeley and also coached there. He played football for the Washington Redskins and the Minnesota Vikings. He was in 2-3 episodes of Adam12 and was in a few other supporting roles in other 70’s T V shows.
Like Reply Delete 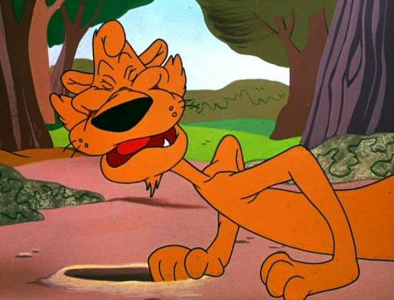 Flash4001 14 months ago
Also Oakland Raiders Lyle Alzado. I forgot the show where he was a teacher and a Masked Wrestler
Like Reply Delete

WonderGeorge Flash4001 13 months ago
If my memory serves me correctly, the series of which you speak was titled, "Learnin' the Ropes"; I remember a number of the stars of what became WCW appeared on the series.
Like Reply Delete

frances3agape 14 months ago
Going to show this to hubby and son, even tho they probably already know everything since they are sports nuts
Like Reply Delete 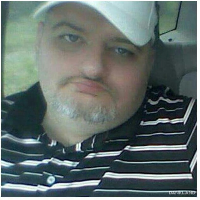 stephaniestavropoulos 14 months ago
4 out of the 10 players were so beloved by their teams and the front office suits, that they never were traded!
Something Merlin Olsen was known for, those FTD commercials.
R.I.P to:
1. Tim Rossovich
2. Merlin Olsen
3. Timothy Brown {He just passed on 4/4/20.}

Patrick 14 months ago
And Alan Autry ("Bubba" on "In The Heat of the Night") played in several games as the backup QB for the Packers as Carlos Brown. (He was born "Carlos Alan Autry" then his mother remarried and became a Brown...hence all the names).
Like (1) Reply Delete

TabPatterson 14 months ago
Rosey Grier was also on Movin' On in a recurring trucker role.
Like (1) Reply Delete

JHP TabPatterson 14 months ago
ya know - hey ME-TV - Sheet can saved by the DUMB bell and try and get movin on..
Like Reply Delete

madmark1 14 months ago
Those aren’t the only NFL players that dabbled in acting a lot of people don’t know this but Lamar Lundy also of the Los Angeles Rams head a bit part in Lost in Space he played one of the monsters I believe he was the cyclops monster on Loat in Space. and of course we all know about Joe Namath he acted on some TV shows and movies and the acting on Broadway as well hence the name Broadway Joe. Carl Weathers who played with the Oakland Raiders also did some acting mostly in a lot of Rocky movies and an Predator on the TV show Tour of Duty and In The Heat Of The Night. Terry Bradshaw was in several movies we all know Terry Bradshaw and he’s done several TV shows Malcolm in the middle and Failure to Launch. let’s not forget about Deacon Jones Who played with the Rams he was in The Brady Bunch and on Bewitched. there’s a lot of them there’s probably a few more I might’ve missed.
Like (3) Reply Delete