Slap on a swimsuit and take a slide down memory lane! 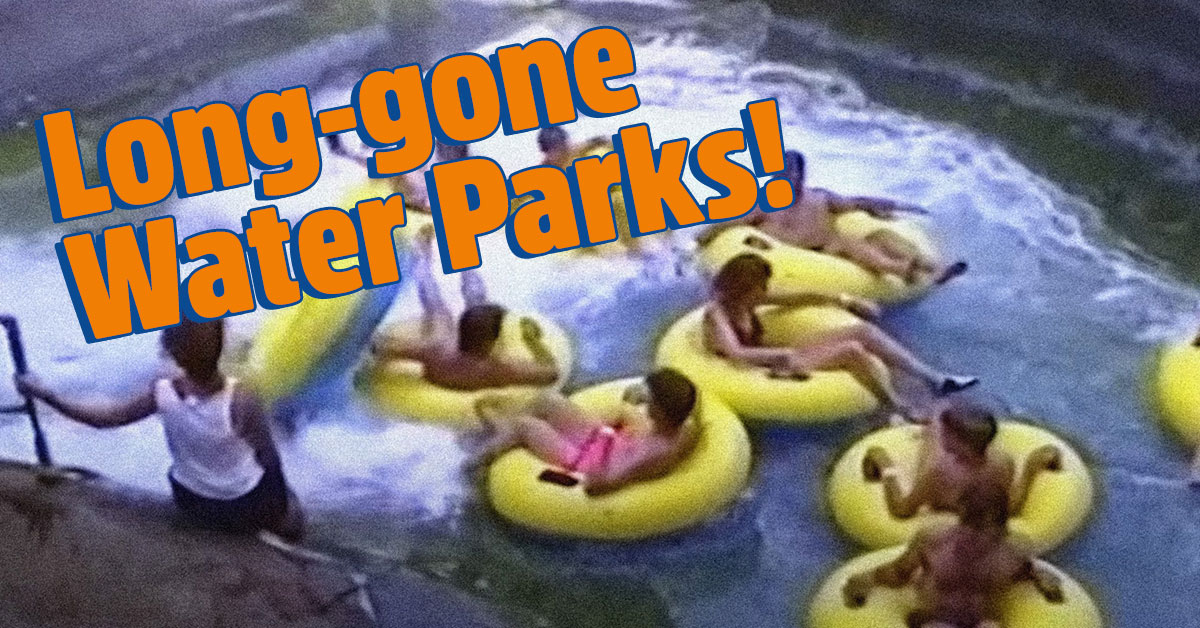 Nothing is more American than apple pie, so the saying goes, and baseball is our national pastime. But water parks deserve a spot on that Mount Rushmore of American recreation, too.

This country is riddled with water slides. There are more than 1,200 water parks in the U.S.A. and the number increases every year. Well, the number fluctuates. Some close, too. Visiting abandoned water parks has been a YouTube trend.

Aquatic amusement parks didn't take off until the late 1970s. Over the years, many beloved parks have come and gone. Here are a handful of historically significant water parks of yesteryear. Did you ever splash down at any of these bygone parks? 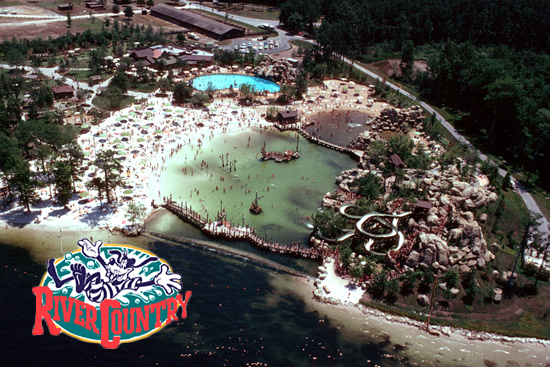 Walt Disney World jumped into the water park business 40 years ago, on June 20, 1976, with the opening of its River Country. There was a touch of Frontierland to the place, which featured rustic wooden designs. The water came directly from the adjacent Bay Lake, pumped through a filtration system into the park. However, those filters did not screen everything. In 1980, a boy died after being infected by the "brain-eating amoeba" (Naegleria fowleri). The park closed in 2001. 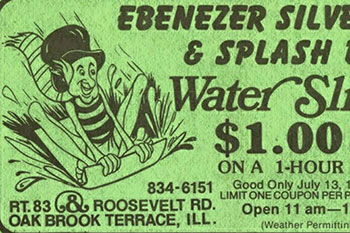 Obscure, but too fabulously named to not include, Ebenezer Floppen Slopper's Wonderful Water Slides sat in suburban Chicago in the early '80s. It was more the pioneering days of water parks. The proof was in the materials — the water slides were made of concrete. At first, there were just two of them, 800-feet long, but more were added, including a tube. Oh, did we mention that the place was built atop a waste dumb dubbed "Mt. Trashmore" by locals? Unsurprisingly, danger, injuries and safety concerns closed the park by the end of the decade. 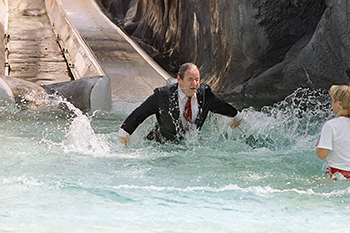 Televangelists Jim and Tammy Faye Bakker opened their Christian amusement park — complete with (holy?) water park — in 1978. In 1987, fellow TV preacher Jerry Falwell took a plunge down the 163-feet-long Typhoon slide, wearing a suit and tie. A picture of Falwell's fully clothed slide was named one of the top 100 national photos of the century by the Associated Press in 1999. Alas, Heritage USA had been closed for a decade by then. 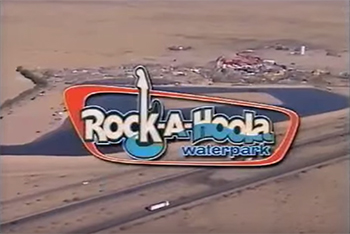 An oasis in the Mojave Desert between L.A. and Vegas, the Lake Dolores Waterpark claimed to be the first of its kind in America. Later, after being sold in 1990, it was renamed the Rock-A-Hoola Waterpark. Today, weeds and sand cover the abandoned park, which is used here and there for extreme skateboard tricks or cool post-apocalyptic sets. 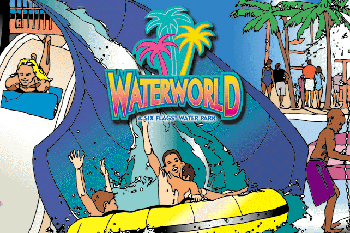 WaterWorld — not just a dystopian Kevin Costner movie! Part of the sprawling AstroWorld amusement park, WaterWorld opened in June 1983 in downtown Houston, across the highway from the Astrodome. Initially, admission was separate, but in 2002 it was decided to let one ticket allow admission to both parks. Alas, AstroWorld left this world in 2005. 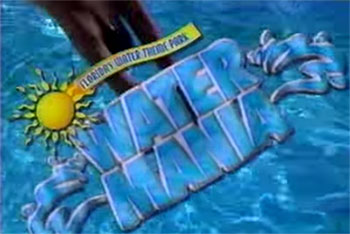 Sitting just up the highway from Walt Disney World, Water Mania offered wet rides for thrill seekers. As if attractions dubbed the Double Bezerker and the Anaconda were not intimidating enough, the surfing simulator was named "Wipe Out." Must have been hard to stay standing. Even the "lazy river" ride promised speed, as it was titled Cruisin' Creek. The joint operated from the 1980s through 2005. Now a Golden Corral buffet sits on the site.

In 1977, SeaWorld creator George Millay opened his visionary Wet 'n Wild Orlando, which some claimed to be the first water park in America, despite Lake Dolores predating it by more than a decade. Still, Millay had great success with the idea, building a Wet 'n Wild chain across the country. Some remain to this day. Locations in Garland, Texas, and Las Vegas, however, are long gone. The Vegas location shut down in 2004, despite a prime location on the north end of the Strip.

Orange County kids of a certain age undoubtedly recall this water park — and perhaps have the scars to prove it. The Edge and Ledge rides were shut down in 2003 due to violent drops on the slide and tales of people getting stuck in tubes. Wild Rivers closed in 2011. 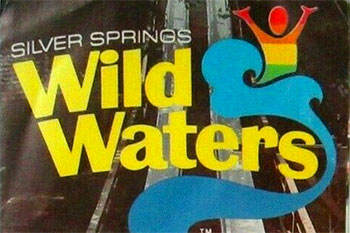 Florida has no shortage of tourist attractions, but Wild Waters felt a little more for locals. It sat in the middle of the state, in Silver Springs, by Ocala, far from any beach. It was a more bucolic setting, with trees and shade. The brochure promised to send you "careening through the trees," in fact. The kiddie area was called "Bonanza." But it was for the little ones, not Little Joe.

AlbertCarpenter 19 months ago
Darneypark may still have a water park to it.
Like Reply Delete

Corey 19 months ago
You forgot the most lethal water park in New Jersey: Action Park.
Like (2) Reply Delete

Mark 19 months ago
Disney's River Country is still there, though unkempt and overgrown. If you look on maps and satellite-view you will be able to see the remnants of the waterslide and the wooden bridges. It's right near the Fort Wilderness Lodge.
Like (1) Reply Delete

RichardStans 19 months ago
When Six Flags Discovery Kingdom of Vallejo, CA was Marine World of Redwood City, it had Tiger Mountain Rapids.
Like (1) Reply Delete

RichardStans 19 months ago
Splashdown, in Milpitas, CA. It was hosted by the Icee polar bear.
Like (1) Reply Delete

Barry22 19 months ago
Been to the Watermania in Florida, down south here in SoFl we had a park called 6-Flags Atlantis, or maybe just Atlantis. They even had concerts there. I remember seeing The Outfield play there.
Like Reply Delete

MichaelFields 19 months ago
The wet and wild in Las Vegas (Where I live) DID close in 2004 BUT it REOPENED in 2013 in a new location (not sure why they moved, probably got a ton of money for where it was, AND ANOTHER water park Cowabunga Bay opened the same year on the other side of town, so now we have 2 located about 20 miles from each other
Like (1) Reply Delete

dbalius 19 months ago
Not sure, but I think one of the first Mt. Trashmores was in Virginia Beach.
Like Reply Delete

Peter_Falk_Fan dbalius 19 months ago
Yes, it was the first landfill property in the US converted into a park. I used to live across the Virginia Beach Expressway from Mt. Trashmore (Thalia Gardens Apts). I could see Mt. Trashmore from my bedroom window. It had a soapbox derby track.
Like Reply Delete

kb7rky 19 months ago
There was also a Wild Waters waterpark in Coeur d'Alene, ID, just off Government Way, overlooking I90. It was behind the La Quinta Inn. It closed, and was torn down a few years ago.
Like Reply Delete

15inchBlackandWhite 19 months ago
There is another Mount Trashmore outside Detroit. It is a ski area that was quite literally built out of landfill.
Like Reply Delete

Peter_Falk_Fan 19 months ago
I remember WDW's River Country. It was okay, IMHO. It was popular, though. I remember the crowds and the terrible bus system at Fort Wilderness. We preferred the pool when we stayed in one of their trailers.
Like Reply Delete

dth1971 19 months ago
No love for Racing Rapids Water Park which was next door to Santa's Village in Dundee, Illinois?
Like (1) Reply Delete

kkvegas 19 months ago
Regarding Wet 'n Wild in Las Vegas, I believe it shut down because of its location, not despite its location. The land it sat on was too valuable to be devoted to a water park.

Regarding Lake Dolores: My friend and I begged our parents to make the drive to take us there (it was advertised heavily in southern California where we lived), but they weren't thrilled with the idea, and we sadly never got to go.
Like (1) Reply Delete

Michael 19 months ago
There was a time when there were a bunch of theme parks in upper NY state. Not big places like Disneyland, you'd visit from within the region, or on the way to somewhere else.

We'd get a lot of advertising on tv about Frontiertown and Santa's Workshop (in North Pole, NY, the CBS affiliate in Plattsburgh long announced it as their location), and there were others. In the sixties we had a local show hosted by a magician, and in tge summer, he'd do shows at remote locations, including Frontiertown. How exciting it lokked through the lens of tv. We never went to any.