10 creepy dolls that terrified us on TV

Creepy movie dolls like Chucky from Child's Play or, more recently, Annabelle from The Conjuring, have made dolls a massively popular horror trope, but devoted TV viewers had already experienced the chilling effect of killer dolls before either movie was released.

In the 1960s and 1970s, shows like The Twilight Zone, The Alfred Hitchcock Hour and Night Gallery had introduced us to twisted toys in nightmare-inducing episodes. From dolls that talked only to children to ones that directly threatened everyone, it was a fear that TV was not afraid to explore time and again. 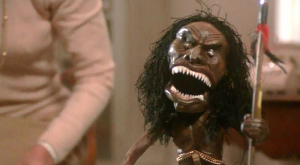 Revisiting these shows' most terrifying dolls reminded us of other memorable dolls that crept onto our TV screens and made a lasting impression — so we compiled a list of our favorite fearsome dolls from TV history. Read on below to see if you remember if these dolls made you feel more than a little squeamish or if you stared bravely into the dolls' glass eyes. 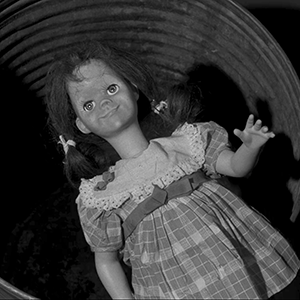 One of TV's creepiest dolls appeared in The Twilight Zone's fifth season, with an unusual vocabulary that adequately freaked out guest star Telly Savalas as much as TV viewers. Talky Tina has dark eyes, a floral dress and pigtails, but when you wind her up, she utters ominous phrases like "I'm going to kill you" or "You'll be sorry" when Savalas' character attempts to toss her in the trash, after which the doll just erupts into giggles. It's as horrifying to watch now as it was when the episode first aired in 1963.

2. The Simpsons - "Treehouse of Horror III" 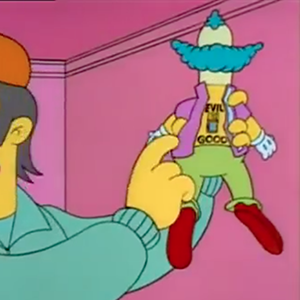 If you loved The Twilight Zone's "Living Doll" episode, you probably chuckled at The Simpsons' attempt to parody it in 1992. For "Treehouse of Horror III," Homer battles a talking Krusty doll he buys as a birthday present for Bart despite warnings that the doll is cursed. Like Savalas' trials with his living doll, Homer starts freaking out when the Krusty doll threatens to kill him. Whether you found it amusing or creepy, the episode probably gave fans cause to pause when considering owning a Krusty doll of their own. 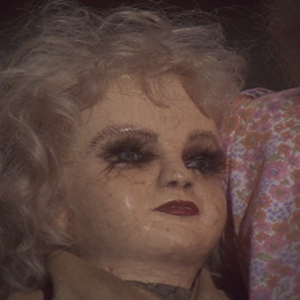 When Rod Serling transitioned from The Twilight Zone to Night Gallery in 1969, he didn't leave his days of terrifying dolls behind. In the fifth episode of the first season, the story "The Dolls" sought to prove that "only that the least likely objects can be filled with the most likely horror." It follows an uncle who returns home from India to find his niece has received a mysterious doll as a gift from someone else in India who assuredly was not him. Before the episode begins, Serling forewarns, "This one you best not play with," but despite the doll's scary face, the niece insists her new toy is "very sweet." The episode's twist ending is one worth revisiting. 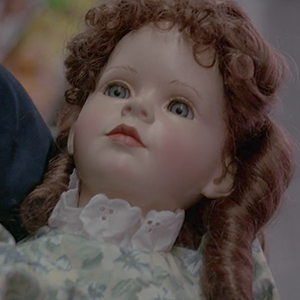 By the fifth season of The X-Files, titan of horror Stephen King wanted in on the action, so he asked to write an episode. That's how we ended up with "Chinga" in 1998, an episode that follows 5-year-old Polly Turner as she clutches her antique doll Chinga while moving about a tiny town in Maine. Audiences watched in terror as the doll's eyes flew open each time the doll declares, "Let's have fun," her robotic catchphrase before she forces others to do her evil and bloody bidding. 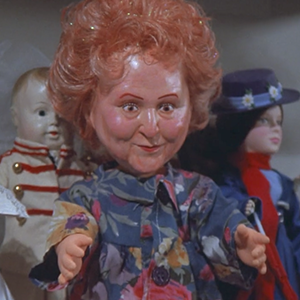 In 1996, Seinfeld turned the doll trope on its head by featuring an episode, "The Doll," in which George Costanza's fiance, Susan, introduces a doll to their home that looks freakishly like George's mother, played by Estelle Harris. Throughout the episode, the doll uses a twisted voice to nag George, and it drives him crazy, just as it did to Savalas on The Twilight Zone. George has an advantage, though, because when he finally shows the doll to his dad, played by Jerry Stiller, and he snaps too, both figuratively and literally when — spoiler alert — his dad beheads the doll on sight. 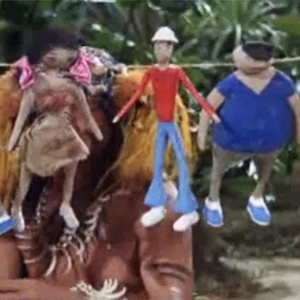 Nothing could've prepared fans of Gilligan's Island for the "Voodoo" episode where Gilligan stumbles upon island "natives" who have created creepy voodoo dolls of the entire cast. "You can't let fear rule your lives," the Professor insists to Mary Ann and Ginger halfway through the episode, after which they dive into his arms, causing him to quip, "Well, on the other hand, a little fright never hurt anyone." By the episode's end, the dolls would wholly prove the Professor wrong.

7. Star Trek: The Next Generation - "Pegasus" 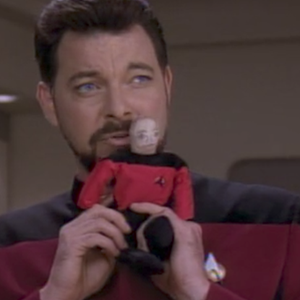 In the seventh season of Star Trek: The Next Generation, it's a doll of himself that creeps out Captain Picard in "Pegasus." "Why does it have to be me?" he asks after being shown his likenesses created by the children of the crew for "Captain Picard Day." The captain is especially not amused when Commander Riker takes up one of the distorted figures to do his best Picard impression. "Isn't there something else you have to do?" Picard asks, after which Riker tries to sneak off with the doll in tow.

8. Voyage to the Bottom of the Sea - "The Deadly Dolls" 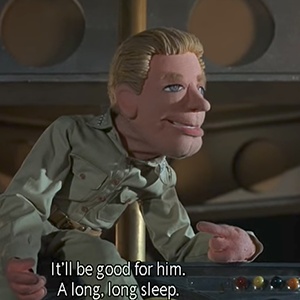 More serious than Picard's encounter with the doll version of himself was the situation encountered by the Seaview crew on Voyage to the Bottom of the Sea's episode "The Deadly Dolls," which first aired in 1967. On Voyage, puppets are made to replace crew members, and as the puppets plot the crew's doom, it's creepier than you might expect to hear them threaten the captain with a "long, long sleep." 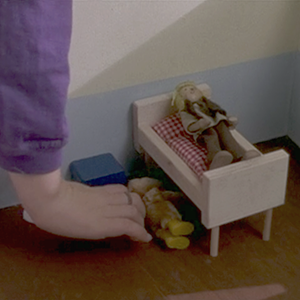 Exploring a classic fear, in 1995 Outer Limits aired "Under the Bed," an episode where a little boy mysteriously vanishes with only his sister as a witness to his disappearance. She insists he was abducted by a creature from under his bed, and the scene where she acts out for a psychologist exactly what happened, carefully choosing creepy dolls to illustrate her point and dramatically chucking other dolls that don't fit the part aside, had the potential to alter the way viewers saw dollhouses forever.

10. The Alfred Hitchcock Hour - "Where the Woodbine Twineth" 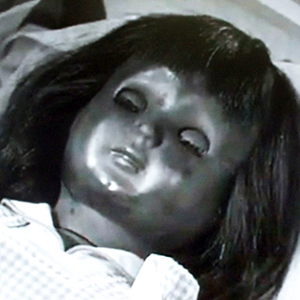 The 1965 episode of The Alfred Hitchcock Hour, "Where the Woodbine Twineth," features double the doll terror when an orphan named Eva receives a doll named named Numa whom she quickly becomes very attached to — so attached she's willing to trade places with the doll if anyone tries to take it away.

11. Trilogy of Terror - ABC Movie of the Week 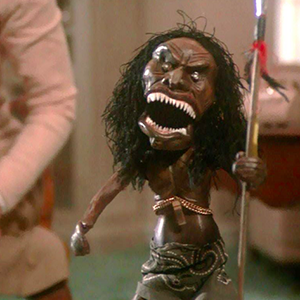 Although Trilogy of Terror was a made-for-TV anthology film, not a recurring show, we would be remiss not to add one of the scariest things that ever aired on our televisions: the Zuni doll from Trilogy's "Amelia" story. Like some other dolls on TV, this one came with a warning. Zuni's said: Do not to remove the gold chain the warrior doll wears that keeps it from coming to life. Before Amelia knows it, though, the doll goes missing, and when it reappears, it's come to terrorize her. The ending is more ominous than most scary stories told on TV, which is likely why the memory of the Trilogy continues to scar viewers today.

Snickers 15 months ago
The "Amelia" part from "The Trilogy of Terror" scared the crap out of me when I first saw it.
Like Reply Delete

Zip 15 months ago
As God as my witness, I thought that that Capt. Picard doll thing was something filmed but not aired. The only place I remember seeing it is in the video for "The Captain Picard Song" on Youtube. I will have to check out that episode.

I am surprised they have the Gilligan's Island episode here, since those dolls weren't creepy. At least to me.
Like Reply Delete

Or drag a file here to upload
DocForbin 25 months ago
It's just a shame that June Foray (who was best known for being the voices of Rocky and Natasha on Bullwinkle and Granny on Looney Tunes) didn't get on-screen credit for voicing Talky Tina.
Like Reply Delete

LittleMissNoName 37 months ago
Why did I not crack the list? I'm way scarier than that stupid Zuni toy!
Like Reply Delete

KathyMcKinny SteveRossi 37 months ago
She wasn't creepy, she was cute, like Kitty Karry All
Like Reply Delete