Where To Watch Shop Store Contact
Home / Stories / Snoopy was supposed to be called Sniffy, and he was based on a dog named Spike
Holiday MoviesCharlie BrownSnoopyDid you know?

Snoopy was supposed to be called Sniffy, and he was based on a dog named Spike

Spike eventually made his way into the 'Peanuts' world, as Snoopy's long-lost brother!

Most of us know Snoopy as the lovable, emotional, funny and lazy beagle from the iconic comic strip Peanuts. It's widely known creator Charles Schulz based the Peanuts characters either on himself, in several variations, or those that were close to him.

Snoopy initially wasn't the face of the Peanuts franchise, and it took time for the animated pup to catch on and develop that mind of his own we know and love today.

Today Snoopy is known as Charlie Brown's pet and as one of the staple members of the Peanuts gang, though his road to stardom wasn't as smooth as it may seem.

The black and white dog wasn't introduced in the first Peanuts comic strip. He made his first appearance "on October 4, 1950, two days after the comic strip's debut," according to History.com. 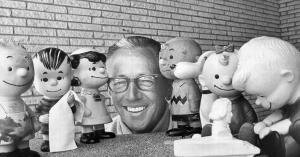 Furthermore, Snoopy wasn't originally going to be named Snoopy. Schulz originally wanted to name the dog of the comic strip Sniffy. The story goes the name Sniffy was already taken by another cartoon dog. Schulz landed on Snoopy after his mother said the next family dog would be named Snoopy.

Finally, a name for the Peanuts pup was set. It was the only thing holding up Snoopy's eventual debut in the comic strip, as Schulz already knew what the dog would look like.

According to a Knight-Ridder news service newspaper article from 2000, "the real inspiration for Snoopy was another [Schulz] family dog, Spike, a black-and-white mixed breed."

If you're thinking you've heard Spike and the Peanuts gang in the same sentence before, you'd be right! Schulz's family dog eventually made his way into the Peanuts universe.

Spike first appeared in a comic strip in 1975, surfacing after sending Snoopy a note in a previous strip. Snoopy's brother wears a hat, has long whiskers and is thinner since he lives with a pack of coyotes that don't like sharing food.

Spike is the main character of It's the Girl in the Red Truck, Charlie Brown, a 1988 hybrid animation/live-action TV film that sees Charles Schulz's daughter, Jill, star as Jenny. 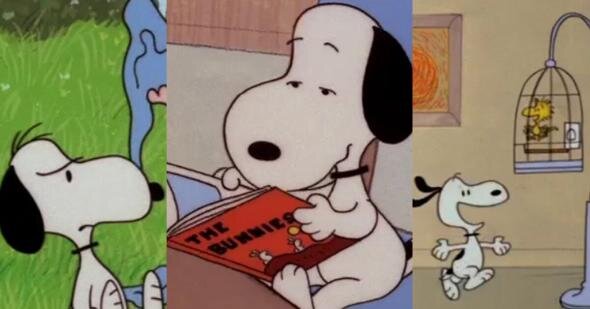 Holiday MoviesPeanutsCharlie BrownSnoopyQuizTrivia
What does Snoopy do next in the Peanuts film 'Snoopy, Come Home'? 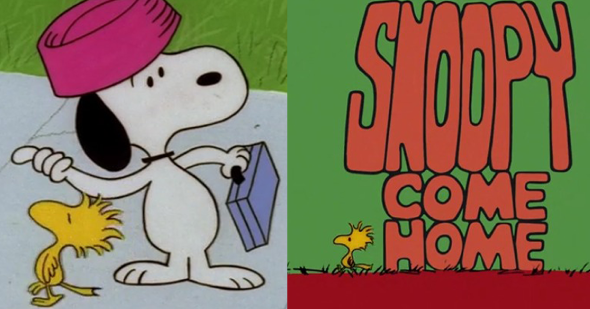 Runeshaper 2 months ago
Very cool that Spike made his way into Peanuts!
Like (1) Reply Delete

LoveMETV22 2 months ago
A short clip of Snoopy's brother Spike.
Like (3) Reply Delete

Coldnorth MrsPhilHarris 1 month ago
Can you remember the names of Snoopys brothers. I only remember Spike. Was there any sisters? Probably a dumb question but I don’t know the answer
Like Reply Delete

MrsPhilHarris Coldnorth 1 month ago
🤔 I only remember Spike but it makes sense there would be more in the litter.
Like Reply Delete

justjeff 2 months ago
What's a "memebers"???
Like Reply Delete

Nala92129 justjeff 2 months ago
Don't be petty.
Like Reply Delete

"I CANT STAND "Svengoolie" and his lame, tedious schtick. He stole material from Soupy Sales, for Goodness Sake! He must be related to a ME TV exec or sleeping with one."

Take things light - life's too short to get bent out of shape with another person's point of view or sense of humor...
Like Reply Delete

justjeff justjeff 2 months ago
PS: Many of us on this blog have fun poking fun at the typos, omissions or errors in the writings of the MeTV staff. They don't seem to mind, because our posts remain up. However, unless we are familiar with each other and kid each other in a good-natured way, we *do not* rag a poster for their writing or grammar... To do *that* would be petty...
Like Reply Delete