Where To Watch Shop Store Contact
Home / Stories / Pop Flashback: These were the top ten hits this week in 1971
music1970s

Pop Flashback: These were the top ten hits this week in 1971

There was a fascinating mix of soul, psych, country and schmaltz on the Billboard charts 45 years ago. 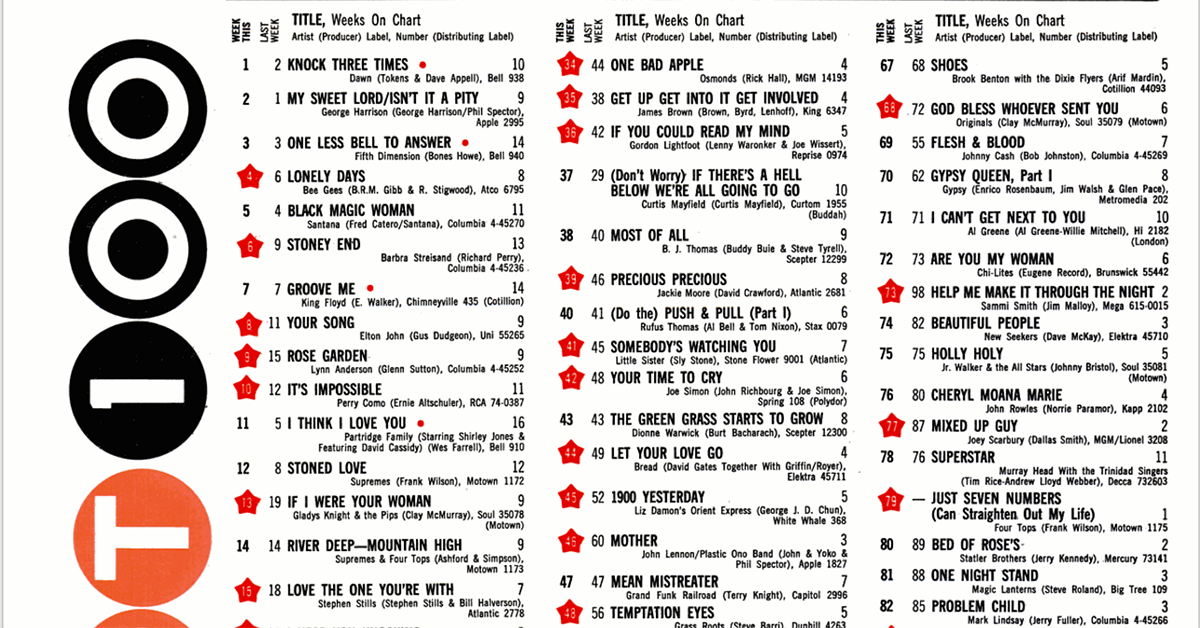 As we rewind the clock (radios) 45 years, we find a fascinating grab bag of songs. The winter of 1971 was clearly a time of transition, as threads of '60s psychedelia still lingered, as did older strains of symphonic standards, alongside the buds of funk and disco. And this being the 1970s, there were of course some delicious one-hit wonders, country tunes and soul.

The Billboard Hot 100 is hardly this diverse these days. Here are the top ten tunes from the third week in January, 1971.

"Ask a baby not to cry, it's impossible."

While Sinatra was coming off some of the worst charting releases of his career, the adult sounds of strings and sharp-dressed crooners had not faded completely.

"Well, a few of the verses, well, they've got me quite cross"

Probably the most popular song on this list, this epic ballad was originally released as a B-side. John's first major hit, it still only managed to peak at this slot, number 8.

This deeply funky cut from the New Orleans soul singer has continually popped up in movie soundtracks, everything from Swingers to Austin Powers in Goldmember. The Blues Brothers also covered its dusty grooves.

"Never mind the forecast / 'Cause the sky has lost control"

Written by Laura Nyro, this upbeat number appeared on the legend's twelfth album. It began her more experimental phase. Two years later, she would be singing over kitchen appliances on a weird, cool obscurity called Barbra Streisand…and Other Musical Instruments.

"She's tryin' to make a devil out of me"

A staple of classic-rock radio, this extended jam was originally written and recorded by Fleetwood Mac — in its Peter Green–led blues phase.

"Good morning mister sunshine, you brighten up my day"

While the brothers' orchestral pop era remains a favorite of music geeks, it's overlooked by those who only associate the Bee Gees with falsettos, fly collars and Saturday Night Fever. The Australian-British act managed to score some big hits before going disco, this being its early breakthrough in America. Nothing on this list sounds more "1960s."

3. The 5th Dimension "One Less Bell to Answer"

"One less egg to fry, one less man to pick up after"

The band's sophisticated soul sound was described as "Champaign Soul."

"Now, I really want to see you"

If you want to call this the greatest solo Beatles song, you have a strong case.

While listed as merely Dawn, this was the work of the act better known as Tony Orlando and Dawn. The cheeky love song sold an astounding six million copies. That certainly helped the group nab a variety television show three years later.