Do you know which episode Happy Days was filming when John Lennon visited?

It might be the most Fifties throwback episode of all time. 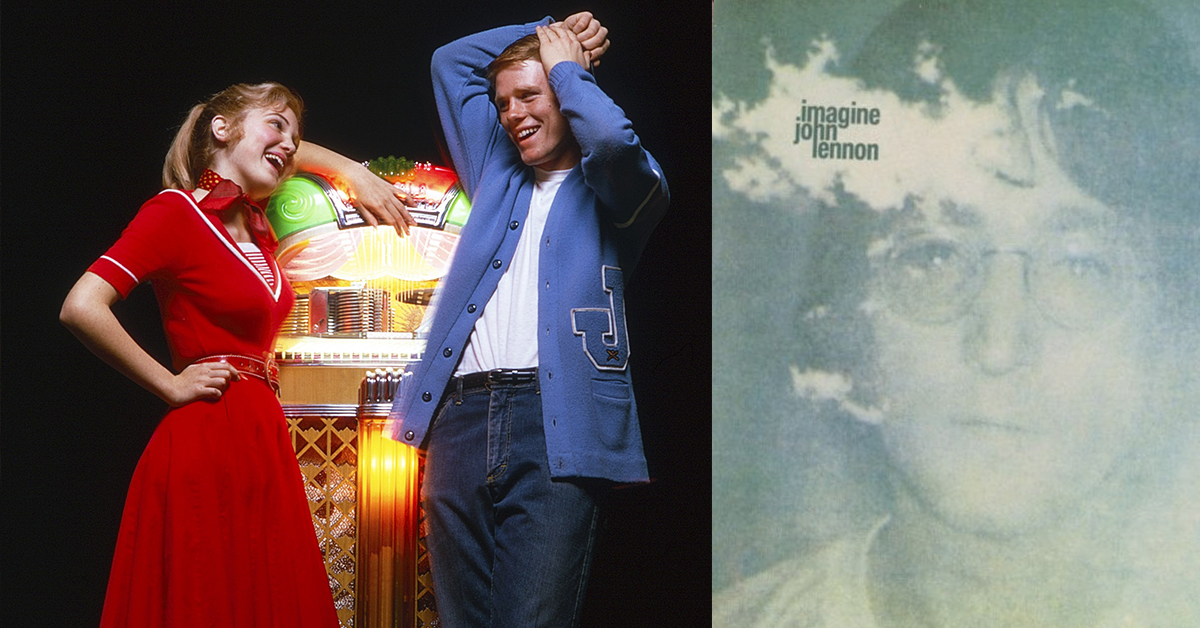 When Happy Days star Henry Winkler told Jimmy Kimmel Live! about the day that John Lennon came to set, the Fonzie cool-guy actor admitted he didn’t know how to talk to the Beatles songwriter.

He did notice that Lennon seemed shy, so Winkler figured he better start the conversation.

"I didn’t know how to get into a conversation with John Lennon," Winkler said. "Then I just started talking about his Imagine album that he made."

As Winkler started revealing his fandom, Lennon seemed to come out of his shell.

Soon the pair of pop icons were deep in conversation about another Lennon album, John Lennon/Plastic Ono Band.

"He opened like a flower," Winkler said. "It was amazing."

Pretty much everyone on the Happy Days cast has similarly opened up like a flower about this day when a Beatle visited Happy Days.

But you may not know which episode the show was filming on that fateful day when Lennon appeared on set.

"Guess Who’s Coming to Visit" aired as the fourth episode ever of Happy Days, and it might just be the most Fifties throwback episode to ever air. 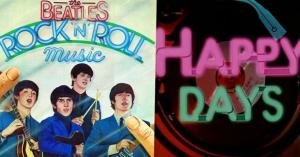 In the episode, Richie sneaks out of the house to watch Fonzie participate in a drag race, driving Ralph Malph’s sick new ride.

Not only does Richie get caught in this episode, confronted when Mr. C shows up at the drag race, too, but before the race can even start, police arrive to break up the whole scene.

It’s a taste of American Graffiti that made the start of Happy Days exciting, and now you know that along with the cool cars and cool-guy racers, John Lennon himself was hanging out when it was filming.

Out of everyone on the cast, it’s likely that Lennon’s visit meant the most to Winkler.

"I had nothing but admiration for John Lennon, but I was never quite as fervent," Howard said. "For Henry, it was practically a religious experience. I just said hello — it was all over in 10 or 15 minutes."

The story goes that Lennon and his son Julian spent the entire day on set of the show.

At some point, the Beatles songwriter posed with the boys, flanked by Ron Howard and Don Most on his right and Anson Williams and Henry Winkler on his left.

Winkler’s not rubbing shoulders with Lennon, but instead, he’s got his hands clasping Julian Lennon’s arms in a sweet hug.

If you look closely at this photo, you’ll know it was taken during the first season of the show, because Fonzie’s not wearing his leather jacket yet.

Instead, he’s wearing a gray jacket, and when you watch  "Guess Who’s Coming to Visit," you can confirm that’s what he had on the whole time Lennon was hanging out.

This episode’s title is extremely fitting for Winkler, who had no idea that Lennon would be coming to visit the set that day.

"All of a sudden, John Lennon just came to visit," Winkler said in 2018, still in awe of this highlight from the earliest days of his acting career. 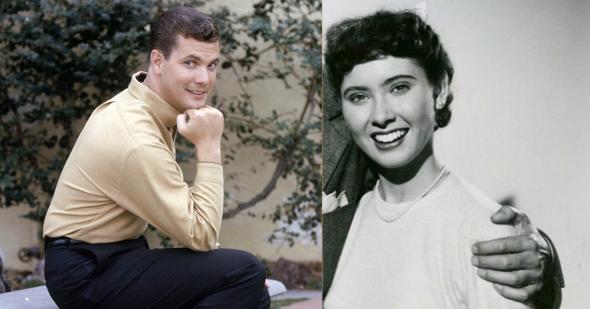 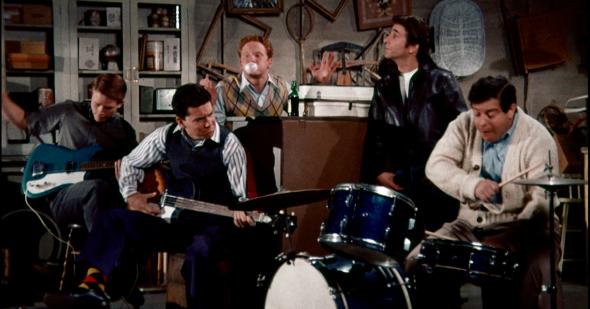 Did you know?
When a Beatle visited Happy Days 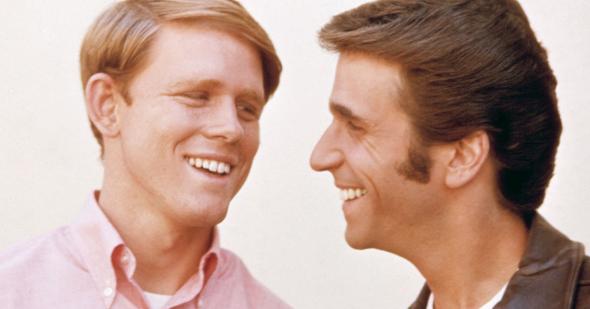 Did you know?
Ron Howard admits he felt ''disrespect'' when Happy Days shifted focus to Fonzie
Are you sure you want to delete this comment?
Close

Runeshaper 1 month ago
Such a cool story. Thanks for providing the link to the photo of them as well! (-:
Like Reply Delete

ELEANOR 1 month ago
I clicked on "If you look closely at this photo" and I did. This was obviously an amateur photo most likely taken, as the accompanying article states, by Fang, John Lennon's current girlfriend. Ron Howard's face in in a shadow and John Lennon is wearing sunglasses. But it is still an iconic photo.
Like (1) Reply Delete

bagandwallyfan52 1 month ago
I wish that Randolph Roberts AKA Chuck Cunningham
And Neil J. Schwartz AKA
BAG ZOMBROSKI and
Barry Greenberg AKA Moose
Had Stayed on HAPPY Days
The ENTIRE 11 Seasons
And I also wish that
Denis Mandel AKA Eugene Belvin and Scott Bernstein AKA
Melvin Belvin and
Danny Butch AKA Spike
Had Not disappeared from Happy Days.
Like (1) Reply Delete

bagandwallyfan52 1 month ago
I wonder whatever happened to
the Cute Girl(CAREY WILLIAMS)
Who Danced with MOOSE
(BARRY GREENBERG) in
Arnold's Drive In in The episode
Guess Who's Coming To Visit.
Also does anyone know whatever happened to
CAROL WILLIAMS. Who played
MARALEE in the Happy Days
Episode Fonzie's New Friend.
MARALEE didnt want to go on
a date with Sticks Downey Jr.
Also whatever happened to
Randolph Roberts AKA
Chuck Cunningham 2 and Whatever happened to:
MOOSE (Barry Greenberg)
Eugene Belvin (Denis Mandel)
Bag Zombroski (Neil J Schwartz)
Melvin Belvin (Scott Bernstein)
Roger Phillips (Ted McGinley )
Like Reply Delete

louannmaryanncplboylefan bagandwallyfan52 1 month ago
Julie Graham played the Cheerleader in Guess Who's Coming To Visit and the Cheerleader said that "Skizzy is
Challenging Fonzie to a drag race,"
Like Reply Delete

LoveMETV22 1 month ago
I'm glad the article has the added story, (when you click on the "If you look closely at this photo" link")
that clarifies his visit. It's great that he had his son with him (and his girlfriend). However they spent time visiting other sets that day as well, the "Happy Days" set was just one of them. It is nice they took time to visit them and took the photo opportunity. Henry Winkler seems to have enjoyed it the most.
Like Reply Delete

bagandwallyfan52 1 month ago
GUESS WHOS COMING TO VISIT
Which has the attempted drag race between Fonzie and Skizzy
Lists Gavan O Herlihy as playing
Chuck Cunningham as being
In that episode in.the closing
Credits but I have watched that
Episode several times since 1974
And I have never seen Chuck Cunningham in that episode.
Like Reply Delete

Andybandit 1 month ago
That must of been awesome to have John Lennon visit the Happy Days set.
Like (1) Reply Delete

harlow1313 1 month ago
The coolest scene in the series is when lonely Moose dances with the frumpy chick.
Like (1) Reply Delete
Load previous comments

MrsPhilHarris bagandwallyfan52 1 month ago
Lol yes I did. It would be fun.
Like Reply Delete

bagandwallyfan52 harlow1313 23 days ago
How did you put that clip
Of MOOSE BARRY GREENBERG and the girl(Carey Williams) on
The METV Comment Line?
I might put a Short Video on
The Metv Comment Line. Sometime Soon but I don't know how to do it.
Like Reply Delete

harlow1313 bagandwallyfan52 23 days ago
To link a Youtube video: Beneath the "new comment" box, there are three small boxes. Choose the middle one and paste the youtube address you wish to link.
Like Reply Delete

bagandwallyfan52 harlow1313 23 days ago
Thank you for the information.
I will do what you said.
MOOSE played by BARRY GREENBERG and EUGENE BELVIN played by DENIS MANDEL AND BAG(Neil J.
Schwartz) and Chuck Cunningham (Randolph Roberts and Melvin Belvin (Scott Bernstein) were all
COOL CHARACTERS on HAPPY DAYS.
Like Reply Delete

bagandwallyfan52 1 month ago
Guess Who's Coming To Visit
Is the Happy Days episode
Where Fonzie wants to have a
Drag race with Skizzy and in
The epilogue MOOSE played
By Barry Greenberg is dancing
With a cute girl played by
Carey Williams in Arnold's Drive In. Marsha Simms said These
Drag Races Just Kill Business.
Marsha Simns was played by
Beatrice Colen and Skizzy was
Played by Alan Abelou.
Like Reply Delete