Where To Watch Shop Store Contact
Home / Stories / Dirk Benedict said The A-Team is a show viewers watched as a family - and that's why it stuck around
The A-TeamDid you know?

''It ended the same way every week, with the bad guys being tied up and taken to jail. The whole family could watch that together.''

When the wind-up to The A-Team's theme song starts and the montage of explosions, chase scenes and fighting commences, one might not initally think the show is meant for families.

The A-Team is certainly a far cry from a sitcom, or the sterotypical "family" classic television series, but according to a pair of stars from the show, that doesn't mean families can't enjoy the show together.

Dirk Benedict portrayed the team's con man, Templeton "Faceman" Peck, or simply, "Face." His character scammed and scored whatever the team needed to get their high-paying job done.

During a 2005 interview in the Netherlands, Benedict said the show initially had success partly because the plots were cut and dry. Good guys vs. bad guys. He said he felt that struck a chord with a lot of people.

"It tapped into a sort of fundemental, universal morality, it was kind of a morality show," Benedict said. "There was good and there was bad. It was a non-violent show, it was kind of a cartoon show. It was very entertaining so people could watch it with their families." 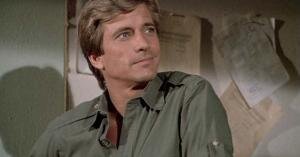 Initally, that statement may not seem accurate, as the show does feature plenty of fist fights, battles and explosions.

How these scenes were created and carried out was clearly fantasy, and multiple stars from the show have acknowledged that. Benedict believes all the viewers watching as a family while the show was initially on the air is part of the reason for it's decades-long success.

"You could watch without worrying, it was just silly," he said. "That gave it longevity, and there's all those people that were young children that watched it with their parents, who now have very... fond memories of that experience, and I think that's one of the reasons why it's had the legs that it has had."

Dwight Schultz, who played "Howling Mad" Murdock on The A-Team, said viewers "knew these were cartoon heroes" in the same interview with Benedict. But what about the violence that does occur on any given episode of The A-Team?

"It ended the same way every week," Schultz said. "With the bad guys being tied up and taken to jail. The whole family could watch that together. There were jokes that were strictly written for adults. There was action for kids."

"The show was very goofy or funny or silly," Benedict added. "What Dwight said was absolutely right, about the [violence]."

Plenty of disguises, crazy plots, jokes and the entire character of Howling Mad Murdock is all proof needed that the show was never meant to be taken as seriously as some critics did.

Whatever viewers deem "violent," doesn't change the fact that The A-Team was one of the top action shows of its time. No matter how unrealistic or "silly" some of the plots may have been, Benedict had a good point in a 1985 newspaper article from The Red Deer Advocate.

"If you were getting mugged on the street, wouldn't you like to see the A-Team pull up in a van?" 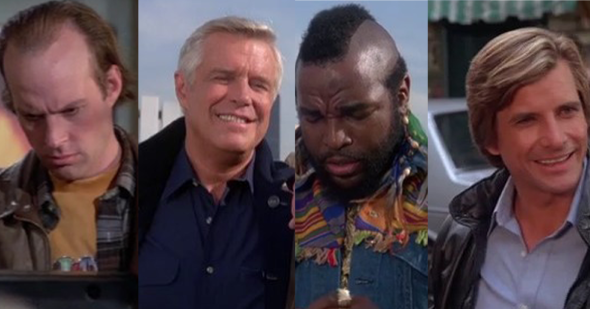 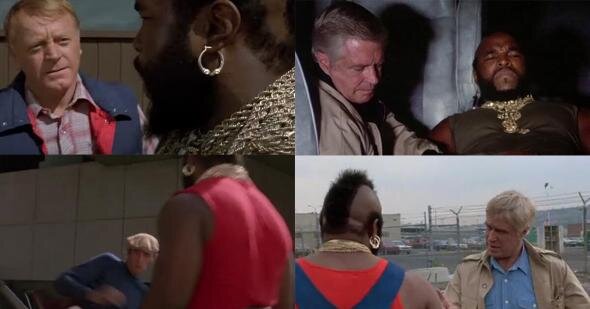 The A-TeamQuizTriviaAction
Did B.A. Baracus throw a punch in these scenes? 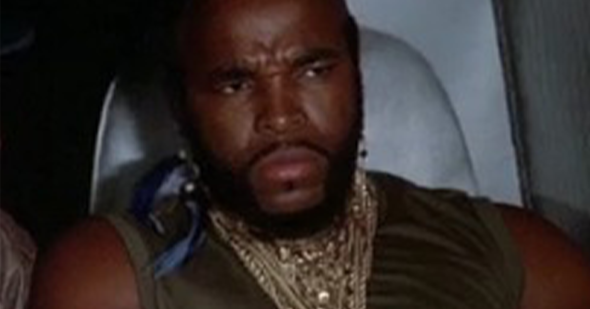 The A-TeamMr. T
True/False: Are these real facts about Mr. T?
Are you sure you want to delete this comment?
Close

Unvmyvdub 8 days ago
I always loved the opening when the Cylon from Battlestar Galactica walks by and Face points at it like it's familar.
Like Reply Delete

GenJan 14 days ago
I love the A-Team still watching the Reruns.
Like (1) Reply Delete

AgingDisgracefully 14 days ago
As a not-very-bright family.
Like Reply Delete

MichaelPowers 15 days ago
If you have a problem, if no one else can help, and if you can find them, maybe you can hire . . . The A-Team.
Like (1) Reply Delete

Or drag a file here to upload
DocForbin 19 days ago
And of course they had to have a Cylon Centurion from the original version of Battlestar Galactica appear in the "Steel" episode as a homage to the fact that Benedict played Lt. Starbuck in that show (and of course the scene was later added to the opening credits).
Like (2) Reply Delete

Jaxter14 DocForbin 14 days ago
That was a great scene. As it walked past Face he gave it the look that it looked familiar to him.
Like (2) Reply Delete

Runeshaper 20 days ago
The A-Team ROCKS!!!
Like (1) Reply Delete

RS1515 20 days ago
I never thought the A-Team was a family show. To me it was a show targeted to the male audience for the age range of between 12 to 30.
Like Reply Delete

Coldnorth RS1515 19 days ago
Not male and it’s one of favorite shows. I like how each character adds their own speciality for the caper.
Like (1) Reply Delete

Pacificsun wallyandbagfan 20 days ago
I appreciate the time you took in responding to my question. I hope this part, helps.

Probably the nicest tribute Producers and Writers of a favorite Series receive, is when the audience (Fans) becomes truly invested in the “spirit” of the Show. After all, that’s a major reason why they go into the business, meaning for recognition, reward and creating a legacy!! Just think, their effort in a single point in time, is continuing on and one. Their secret however, for producing amazing entertainment, is their ability to move from one imaginary achievement to the next! Unless they could (and did and do) the very point that you are you’re bringing up, wouldn’t be possible. Meaning when an actor’s talent is shared among different Shows. And if they couldn’t be shared, then television would get pretty boring. We'd be seeing the same people over and over, and without any evolution.

But when they do, consider it a compliment. Meaning that one actor (who you're focusing on) has enough talent to share in a different piece of entertainment. And also the idea, that Producers and Writers recognize that person's ability!

So, your comment can be taken, not really as a criticism, because there’s no point to what's already done. But instead, using your ability to point out what all of these gifted actors have to offer, and no matter for how long they've played the role. Though it hurts to say it, sometimes one of their opportunities does have to end, so they can move on to be recognized in a different good way, as well.

The truth of the matter is the Industry is a business. There is no point or time for decision-makers to get caught up in emotions, even as much as Fans love what they're watching on screen. Share instead, your energy and talent for the specific things about what keeps "you" entertained! Maybe notable and unique characteristics of how they played a role. What made them memorable. How they enhanced the story. And related to the Cunningham family. Remember, at the time, those ancillary (supporting) characters were added for a reason. But when they did their job, the imaginary, fictional storyline of that Series needed to evolve as well.

That’s just how life works, in general. Nothing stays the same 😉