Where To Watch Shop Store Contact
Home / Stories / Danny Thomas was the perfect choice to play the grandpa on Happy Days
Did you know?

Plus, Danny Thomas inspired Garry Marshall to pop the question to the love of his life! 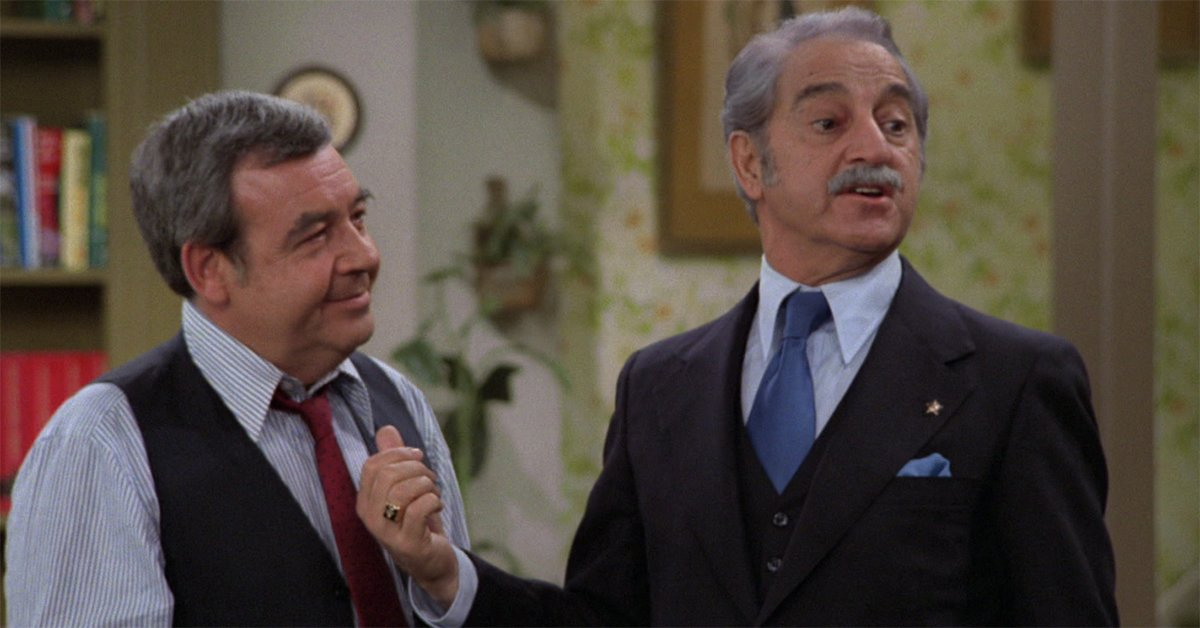 Few family sitcoms in the 1970s could match the nostalgic lens that Happy Days used to welcome viewers inside the Cunningham's Fifties- and Sixties-based home. Tom Bosley as Mr. Cunningham, affectionately known as "Mr. C," held the family together, carrying the torch for cherished TV dads who came before him.

Casting an actor to play Mr. C's father, therefore, must've been a special task when writers penned the episode "Grandpa's Visit." For Happy Days series creator Garry Marshall, though, there was probably nobody else to even consider for the role other than the original king of the family sitcom, Danny Thomas.

His popular sitcom The Danny Thomas Show set the bar for how funny family TV could be — and eventually spawned the spin-off The Andy Griffith Show, which everybody knows famously debuted Ron Howard before he became Richie Cunningham.

It might be less commonly known that Marshall had long, fond ties to the TV father figure, too. And their bond was so deep, there's actually a Danny Thomas reference hidden in the name of Marshall's production company as a tribute.

When Marshall first started out as a writer, he co-wrote his first script for The Danny Thomas Show with his writing partner Jerry Belson in 1963. In the episode, Danny's daughter develops a major crush on a boy named Wendell Henderson. She falls so hard for Wendell, she picks the dirt out of his Little League cleats and brings it home to stash it in a growing pile of dirt in her bedroom.

For Marshall and Belson, this episode became so representative of their brand of humor that they named their first TV production company after the crush character, Wendell Henderson. Even after the writing duo split up, they both found a way to keep the name, Marshall working under the banner Henderson Productions, and Belson under Wendell Productions.

Like many writers of this era, Marshall looked up to Thomas as a distinct talent from who he could learn.

"Danny was an odd fellow," Marshall wrote in his memoir My Happy Days in Hollywood. "He was a great comedian who excelled by telling funny stories rather than punch lines."

Marshall appreciated Thomas for being available to talk to young writers like him about ideas, a genuine father figure behind the scenes, too.

"He was gracious and sweet and always so good to writers," Marshall said.

For Marshall, this early time working with Thomas didn't just inspire the next phase of his career. He found Danny's family-man vibe so compelling, he decided to follow his mentor's lead and take the next step in an even bigger way.

"Danny had a great influence on me because he was such a family man; he had a wife and kids," Marshall said. "I wanted that, too. So with my career going so well, I decided that it was time to make a commitment in my personal life."

Marshall decided to pop the question on New Year's Eve to his girlfriend Barbara Sue Wells, whom he met after she ran away to California when another man left her at the altar. His loss, Garry's gain! They'd been dating for more than a year before the engagement, and they got married three months later.

"We were a perfect match," Marshall said.

However, one thing about their very small wedding in Las Vegas was not so perfect. Not everybody in their family could come — Marshall said he and Barbara couldn't afford to fly everybody out.

"My father and her mother were mad about the fact we did not include them," Marshall said, claiming this fact kept haunting them at family gatherings, their wedding viewed as "an eternal disappointment." (This brings to mind how Richie Cunningham was not able to make his own wedding on Happy Days.)

Marshall said her father was fine with the marriage itself, of course, and joked that his mom just wished that Barbara Sue was a doctor instead of a nurse.

"I told her a nurse would take care of me just as well," Marshall said.

By bringing Danny Thomas onto Happy Days for "Grandpa's Visit," Marshall marched out one of TV's favorite fathers to play dad to Mr. C, while also giving a new generation of TV writers working on Happy Days an opportunity to meet and work with the TV legend. In a book about male TV icons from the '50s, '60s and '70s called Dashing, Daring and Debonair, Happy Days writer Marty Nadler explained why his fondest memory working on Marshall's sitcom was the day Danny Thomas visited as grandpa Cunningham.

"When growing up, I watched a lot of television," Nadler said. "Milton Berle, Jerry Lewis — and Danny Thomas on Make Room for Daddy. And at the age of 8, I decided I wanted to be in this business — and especially comedy. And one of the greatest thrills for me, was years later, I was on the Paramount lot, on the sound stage, giving Danny Thomas notes on an episode of Happy Days when he played Richie Cunningham's grandfather." 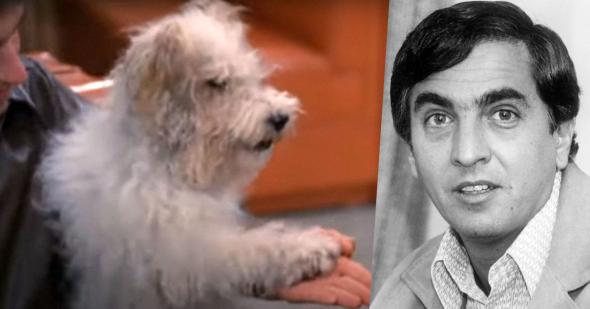 Did you know?
It's safe to assume Garry Marshall was afraid of Spunky on Happy Days 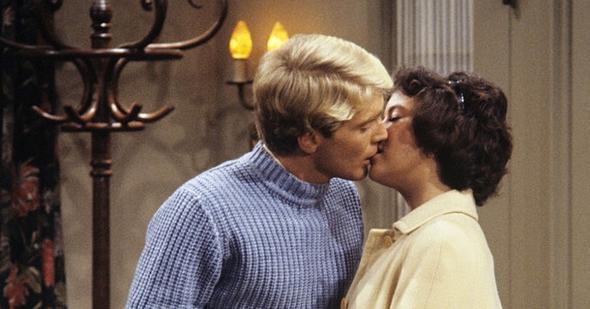 Did you know?
The audience reaction to Joanie's first kiss changed the course of Happy Days 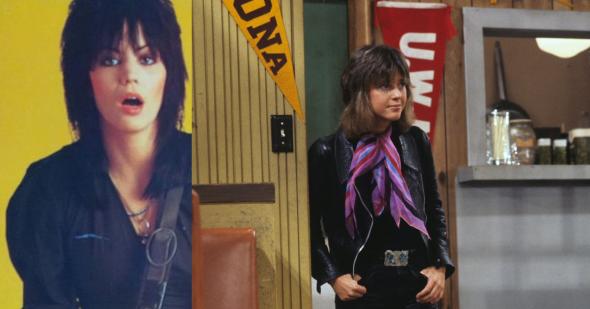 Music
Happy Days recreated the moment Joan Jett decided to become a rockstar
Are you sure you want to delete this comment?
Close

15 months ago
Does anyone remember who played "Uncle Toonoose" on the old Danny Thomas Show? Was it Hans Conreid?
Like Reply Delete

jokerfan1 15 months ago
How do I or anyone else send in a
TV quiz on a METV TV show??

Adanor 15 months ago
I watched "Make Room for Daddy" as a child and there is one scene that I will remember forever. Danny got a trophy and says to his wife, "Look honey isn't this great?" She bursts into tears and he asks, "Why are you crying?" She says, "It just one more thing I'll have to dust!" How many wives have pasted a smile on their face and congratulated their husband on his accomplishment while thinking that it's just one more thing to dust?
Like Reply Delete

Adanor LoveMETV22 15 months ago
Do these select markets involve a fee? If so, that is on top of the cable or satellite fee. A&E is already doing this.
Like Reply Delete

LoveMETV22 Adanor 15 months ago
No Adanor. It was an article done by a news source close to where MeTV is headquartered interviewing one of the MeTV executives. I believe it will be rolled out first to the market areas MeTV selected, then to other markets if successful. It didn't say anything about fees. I guess that would be up to the individual cable companies. I googled MeTV Plus and saw the article.
Like Reply Delete

SalIanni 15 months ago
Will "Make Room For Daddy" ever end up on Me-TV or Me-TV Plus? It hardly gets seen anymore, even online!
Like (1) Reply Delete
Load previous comments

justjeff MrsPhilHarris 15 months ago
All I need is the money... Large dollar donations are gladly accepted...
Like Reply Delete

cabugi 15 months ago
Has anyone else noticed how ME TV, Sundance, etc. are cropping jokes and whole scenes from the Andy Griffith Show, in order to squeeze in more and more and more commercials? I also resent the way these networks squeeze the credits way down, at the end of TAGS, Perry Mason, etc. to hawk other shows? Finally, am I the only one who HATES the promo for an abysmal sitcom called "Mom?" A mother and daughter are seen joking about the mother "licking cocaine crumbs out of a carpet!" The "mother" chides the daughter about being frugal. This is such irresponsible, detestable programming! Shame on Paramount and the network hotshot who find this amusing! I guess they've never lost a loved one to drugs.
Like Reply Delete