Maybe the house could somewhat comfortably fit the Tanners in the show, but the real-life property would have the fake family feeling awfully cramped.

The tricks and trades of television are meant to be oblivious to the viewing audience. Whether the trick is to make a character seem taller than the actor is in real life, or make a house look much bigger than it really is, creative tactics can take place during any given scene on television.

Often times, the setting of a house, apartment or street isn't an acutal location in real life. That isn't the case in Full House. The iconic Victorian home of the Tanners is located at 1709 Broderick Street in San Francisco.

Of course, the inside of the actual home in San Francisco was never used for the show, as scenes were shot nearly 400 miles south in Culver City, home to Sony Pictures Studios, where the first six seasons of Full House were filmed according to Dirt.

Comparing the outside shots of the phsyical house in San Francisco, to the studio shots and main set in SoCal, it seems like the set really could be the inside to the Bay Area home. That's what show creator Jeff Franklin wanted: to find a house that's really in San Francisco that looks big enough to actually accomodate the huge family. 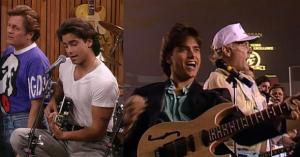 Well, according to a 1994 interview with Entertainment Tonight, Bob Saget, who played the corner-stone character of Danny Tanner, says there is no way the Tanner household could be real.

"This house is architecturally impossible. It can't happen and I can explain why."

Saget was giving a behind-the-scenes look of the Full House set in Southern California, describing all the TV stunts used to make it seem like the fake family was in the real San Francisco home.

The actual house in San Francisco is just over 3,700 square feet according to Business Insider. Franklin purchased the house in 2016, planning to "turn it into a replica of the TV show set and even allow fans to visit and walk through the place." On account of high foot-traffic and upset neighbors, Franklin decided to totally renovate the home and list it instead. In 2020, the house was on the market for a whopping $5.5 million.

While the real home may seem like it could possibly fit the Tanner family from an outside perspective, Saget said the house would have to have a rather unique shape if were to actually represent what fans saw on the show.

"The architecturally impossible part of this house is when you come up [the] steps. It supposedly takes you to all the bedrooms you would see on the show. The only way that could happen is if the house went straight up and went out like a mushroom. So, it would be about a 12,000 square-foot house," Saget joked in the interview.

As we know from the opening credits and scene-setting shots of the real house, there's no mushroom shape, rather a flat rooftop. Though we see the actual house with the memorable red door in parts of the opening credits, it's not pictured in the famous row of Painted Ladies, seen while the family is picnicking according to dirt.com. That's because the real house located on Broderick Street is about a mile away from the famed row of homes.

We know the Tanners never lived in a real house together and that the concept of the series was carried out on a TV set. But for fans that have wondered how realistic it was for that many people to live under one roof of a San Francisco Victorian home for eight years, it's fun to know, according to Saget, that the house is about 8,000 square feet too small. 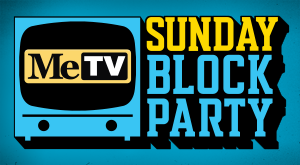 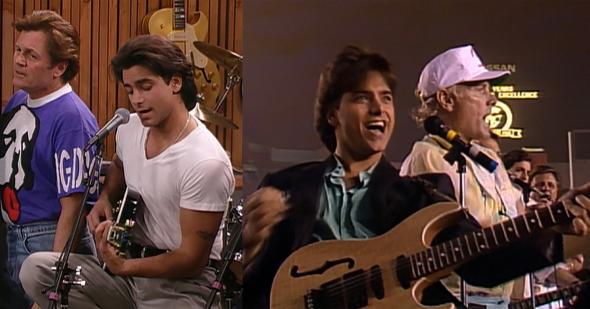 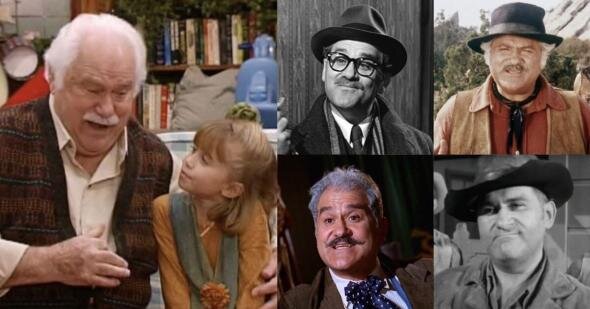 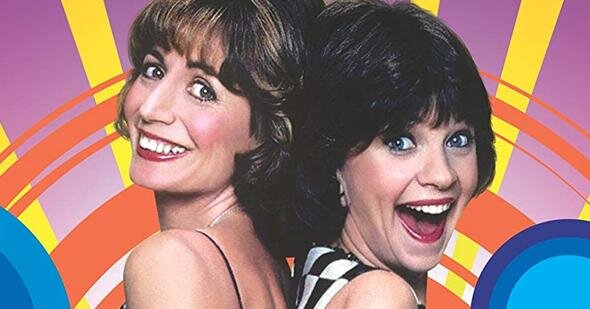 Go back in time to before they became Laverne & Shirley
Are you sure you want to delete this comment?
Close

DanDo77 24 days ago
I studied Architecture and it's fun to see the houses and apartments on the show and compare them to the exterior homes they show at the beginning of the show. The sitcoms Leave it to Beaver (2nd house) and My Three Sons (1st house) the interior matched the exterior of the homes very well, others like Full House had an impossible house to match to the exterior. The Full House home would need to be twice as big inside than outside with some rooms added on the ground floor, as well instead of a garage. The later episodes after the twins were born also showed a large attic on a roof that was mostly flat, as well.
Like Reply Delete

ncadams27 29 days ago
Virtually every TV home is architecturally impossible. The scenes filmed inside are sets, designed to allow room for cameras, with doors and furniture placed to allow for easy entrances and exits by actors. Look how many sitcoms have the sofa near the front door with steps leading upstairs directly behind it. Exteriors might be an actual house (like Full House) or on a studio “street” (like Leave It To Beaver).
Like Reply Delete

Michael 1 month ago
HGTV addressed this when they renovated the Brady house. They bought it, and had to extend it, and even then couldn't get it like the real thing
Like (1) Reply Delete

LoveMETV22 1 month ago
Hmmm.... / " and went out like a mushroom." Maybe this home would have met the Tanner's needs. 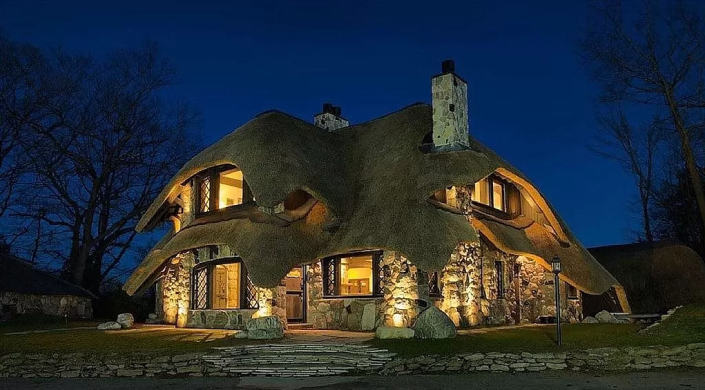 Pacificsun LoveMETV22 1 month ago
𝑰𝒏𝒕𝒆𝒓𝒆𝒔𝒕𝒊𝒏𝒈 follow-up! I read a little about it. Clever concept to attract vacationers.

Andybandit 1 month ago
Well I will not be watch MeTv until 5pm, when Andy Griffith comes on. I am excited for Bugs Bunny next Sunday. I am sorry for not liking Full House. But it is time to go off the line up.
Like (4) Reply Delete

Pacificsun LoveMETV22 1 month ago
Truly!
What don't we know about Bugs Bunny, I wonder!
Like (2) Reply Delete

Rob ColleenBender 1 month ago
Yes, that is six hours too many for me.
Like (2) Reply Delete

justjeff 1 month ago
My takeaway from this article: ..."an acutal location"; "the phsyical house". What's an acutual location... and what kind of house is phsyical?
Like (3) Reply Delete
Load previous comments

justjeff Pacificsun 1 month ago
I do believe many folks missed the point... I was poking fun at MeTV's spelling errors, *not* the grammatics...
Like (1) Reply Delete

LoveMETV22 justjeff 1 month ago
Pointing ,Polking. I think most got it. However for those that didn't, the Stooges can take the point or poke for them.
Like (1) Reply Delete

Pacificsun justjeff 1 month ago
Ahh, your points are seldom missed my friend. I like going down rabbit holes and that was a good excuse. Keep on sharing your welcomed wit! 😎
Like Reply Delete

Pacificsun LoveMETV22 1 month ago
😎
The only thing that saved this clip, is this!

Pacificsun 1 month ago
How many real homes work as does the set of a fictional sitcom? Probably Leave It To Beaver had one of the most sensibly arranged set of rooms. But remember the fourth wall is always removed, so that complicates any normal usage. These Victorians, and the reason they sell for so much money, is primarily the value of the land (obviously), and this case the renovation investment. But also the size of the rooms and the fact that it's 3 levels. Given the possibility of an Attic conversion, or even a room in the garage. Or re-appropriating another of those rooms. Take a look at the actual blueprint, and be the judge. https://www.movoto.com/san-francisco-ca/1709-broderick-st-san-francisco-ca-94115/pid_fq1woad48g/#propertyPop Made for a good story, but anyone could remodel the home to suit their needs. It's 3728 sq ft, and that's a massive amount of footage, thinking vertically with staircases.
Like Reply Delete
Load previous comments

LoveMETV22 Pacificsun 1 month ago
LOL. Well no. I was being courteous. To paraphrase a line from " The Silence of the Lambs "
" You don't want that song inside your head. " LOL
Like (1) Reply Delete

justjeff LoveMETV22 1 month ago
I vote for "It's a Small World" as the most redundant... at least Shari Lewis' song was cute...
Like (1) Reply Delete

LoveMETV22 justjeff 1 month ago
LOL, there's also the smarmy intro to " Small Wonder ", the Intro to " The Ropers". There's probably a few others, but I agree on the O&H show intro -The voiceover explanation spelling out each character wasn't necessary. LOL
Like Reply Delete