We knew it was a good sketch when Harvey Korman broke character multiple times.

Few comedians could get a live studio audience, those watching from home and nearly every co-star on set cracking up as much as Tim Conway.

Conway would often take a sketch on The Carol Burnett Show into his own hands, going off script and long on time, just to make his co-stars break character.

He once said it was his goal to make long time co-star Harvey Korman break character, and he succeeded many times, giving those Carol Burnett Shows the "live" feel time after time.

Though there are way too many memorable Tim Conway sketches to list, here are just some of his most memorable performances. 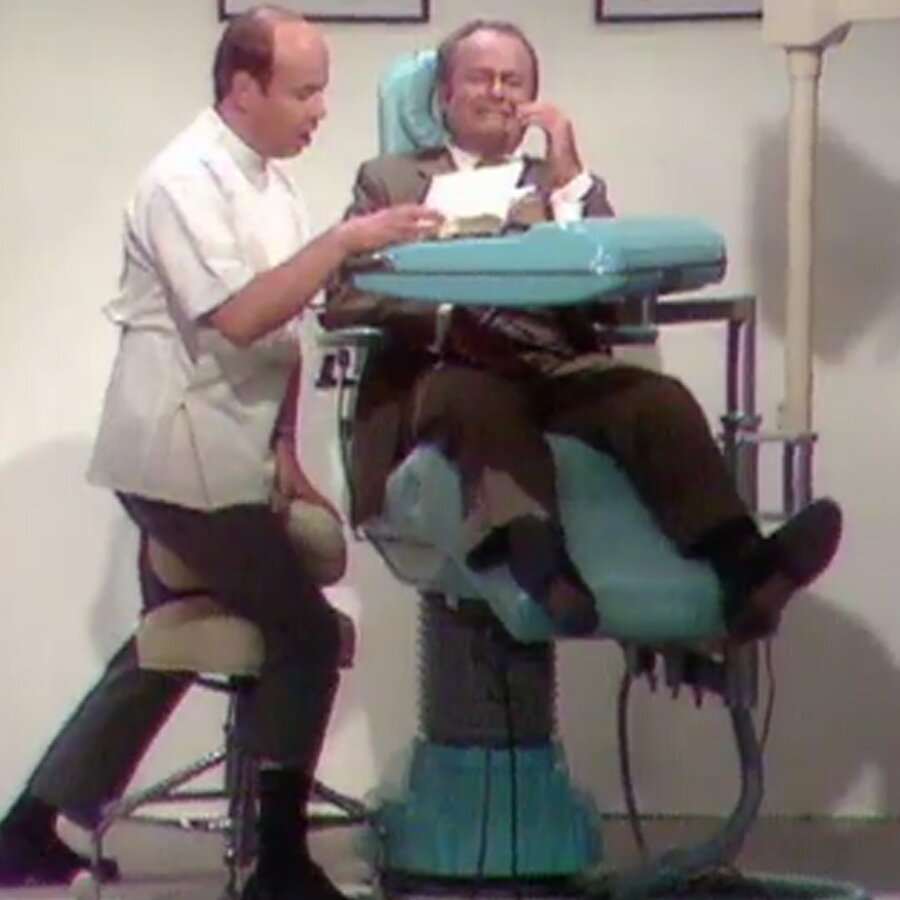 Where else would we start than "The Dentist"? It's one of the best comedy sketches in the history of television. Conway portrays a recently-graduated dental student who is nervous to treat his first patient. Nervous, actually, would be an understatement. His character only got Cs in the "filling and pulling" category of dental school, but Conway himself delivered an A+ performance in this sketch, arguably his most memorable on The Carol Burnett Show. He went off course so much, and caused Harvey Korman to laugh so hard, that Korman wet himself! 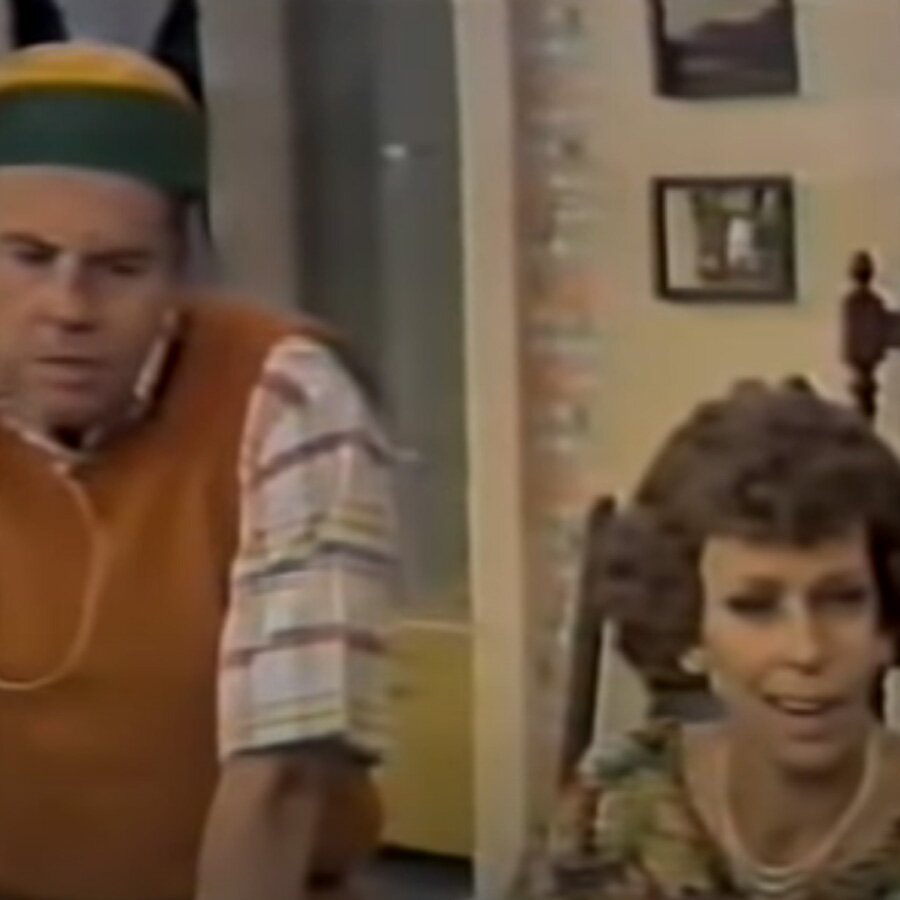 The elephant story could also be argued as the most memorable Tim Conway sketch from The Carol Burnett Show. This one comes during a Mama's Family sketch, featuring Conway, Burnett, Vicki Lawrence and Dick Van Dyke. Conway won't let the skit continue until finishes a story about a circus elephant. Each time Burnett, who plays Eunice, tries to talk to Mama, Conway cuts her off with more about this elephant. Ballerina skirts, elephant lovers and elephant squash continues to break up everyone, including Conway. In a second attempt at the sketch, Conway brings it up again, but this time the story is about siamese elephants. As the crazy story continues on, when Burnett turns to Lawrence for the next part of the skit, Lawrence interrupted with an off-script line that sent the entire cast and audience into a frenzy. Watch it here! 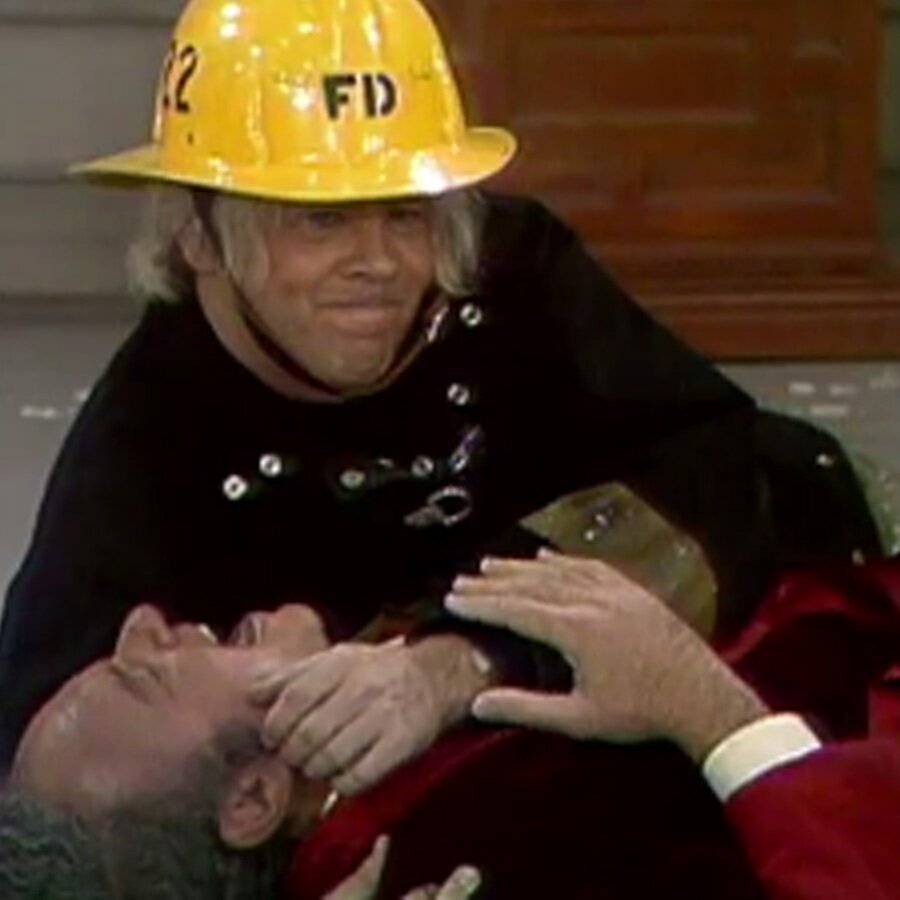 When a fire breaks out, it's naturally up to the fire department to arrive quickly and extinguish the flames. Harvey Korman's character Reginald Worthington has called the fire department twice telling them to hurry. Though he's on the first floor, a firefighter that should've retired a few years back breaks through the glass on a ladder. Conway hilariously breaks more glass before using his tiny ladder to enter the home. Conway's pitter-patter pace towards the flames isn't too helpful. The laughs really kick in when Korman suggests he needs mouth to mouth resuscitation due to smoke inhalation. Taking his time, Conway bends down, grabs Korman's face and says, "where are you from." Korman, who was clearly already laughing, totally breaks character and chuckles until the sketch is over. 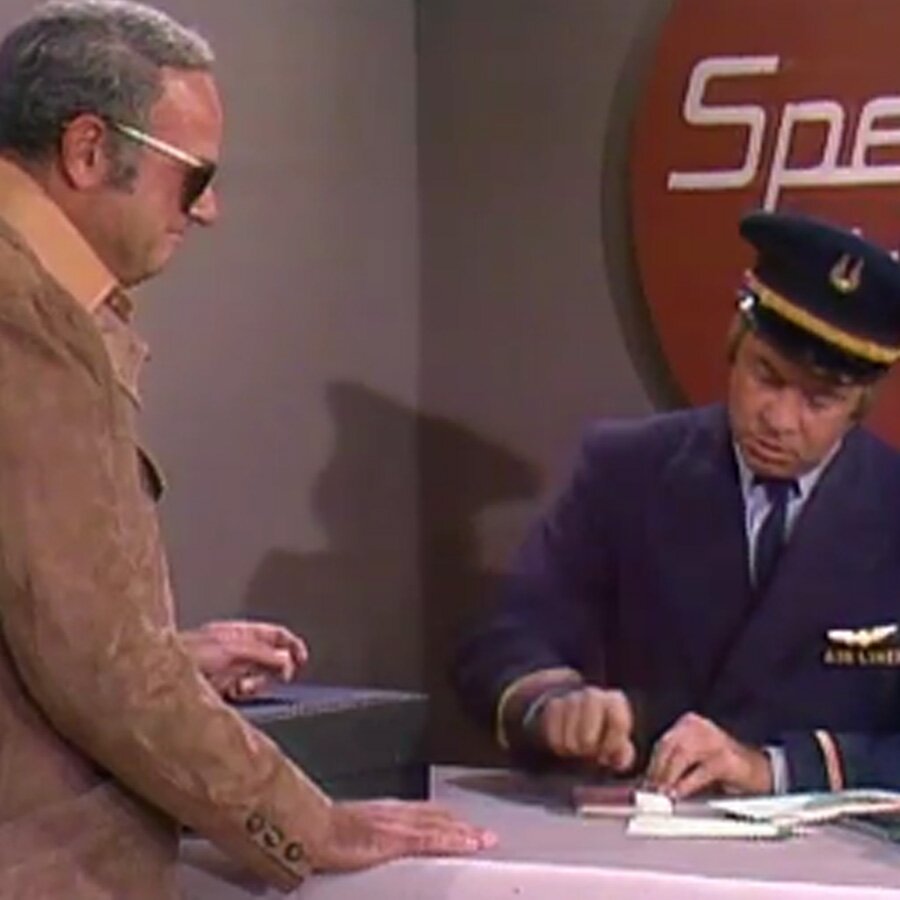 When Harvey's character is heading to Los Angeles on "Speedo" airlines, Conway is the gate agent. Not only does he stamp LA as Korman's destination, he stamps out every letter and even stamps that Korman is allowed to use the restroom on the plane. Conway stamps Korman's ticket several times, each one with more force. When the passenger tries to tip the gate agent, you better believe he stamps that, too, sending Korman into another obvious character break. Then, Conway has to check what's inside Korman's briefcase. It involves a drill, crowbar and saw. We'll leave it at that.

5. Guard to the King and Queen 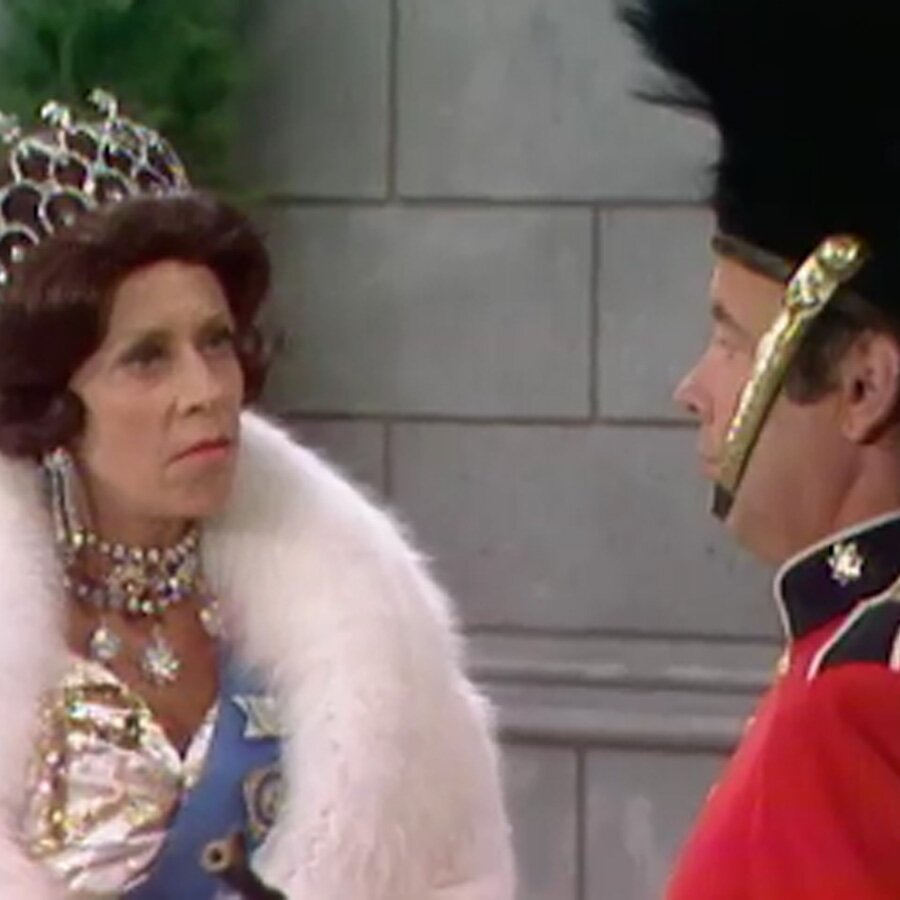 "Nobody goes in the palace without the password." Not even the king (Korman) or queen (Burnett). Perhaps a bribe will let the king and queen pass through, a solid idea until the guard turns down a shiny new shilling by telling the king, "stick it in your ear." Instead, the guard would like sweet treats as his bribe, including a "buffalo popsicle" and a "double decker cone," made of one scoop of "antelope sherbert and one scoop of goat-hoof ice cream." 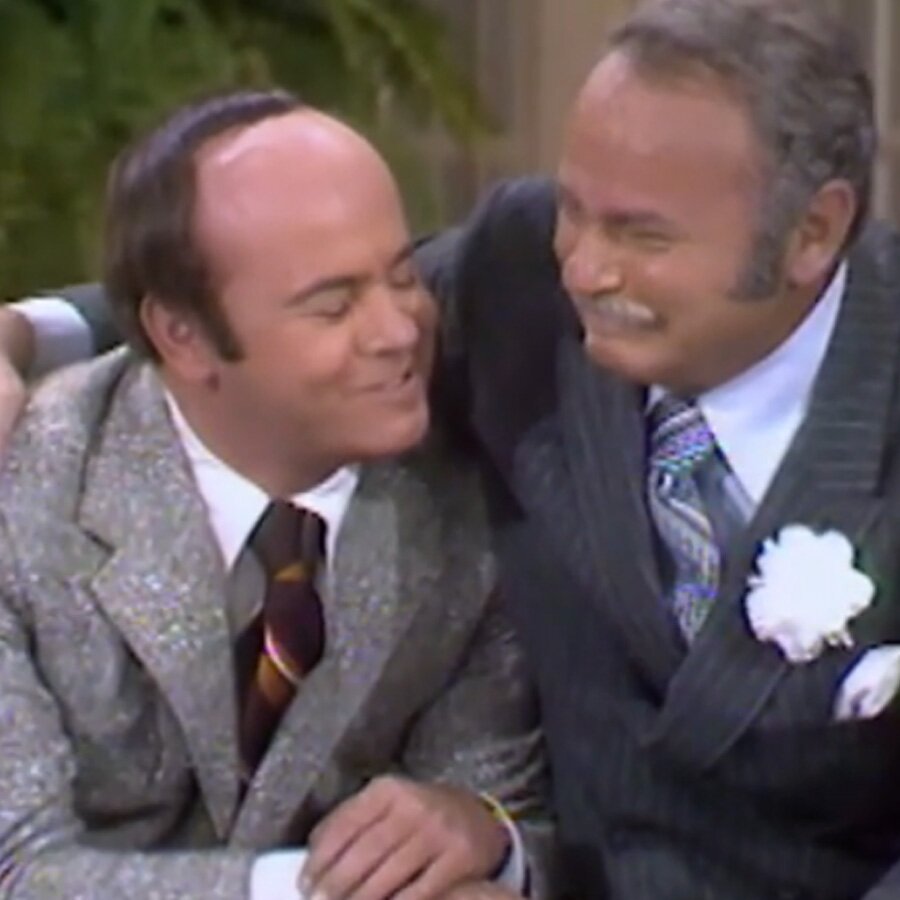 There's just something about Tim Conway's characters that can't help but get poked with needles. This time, worried doggy parents Conway and Burnett are relieved when their pup only needs a shot to get rid of a virus. But the vet sticks the needle into Conway's hand. The reaction to the shot results in barking at the door, sniffing the visitors and licking Harvey Korman. 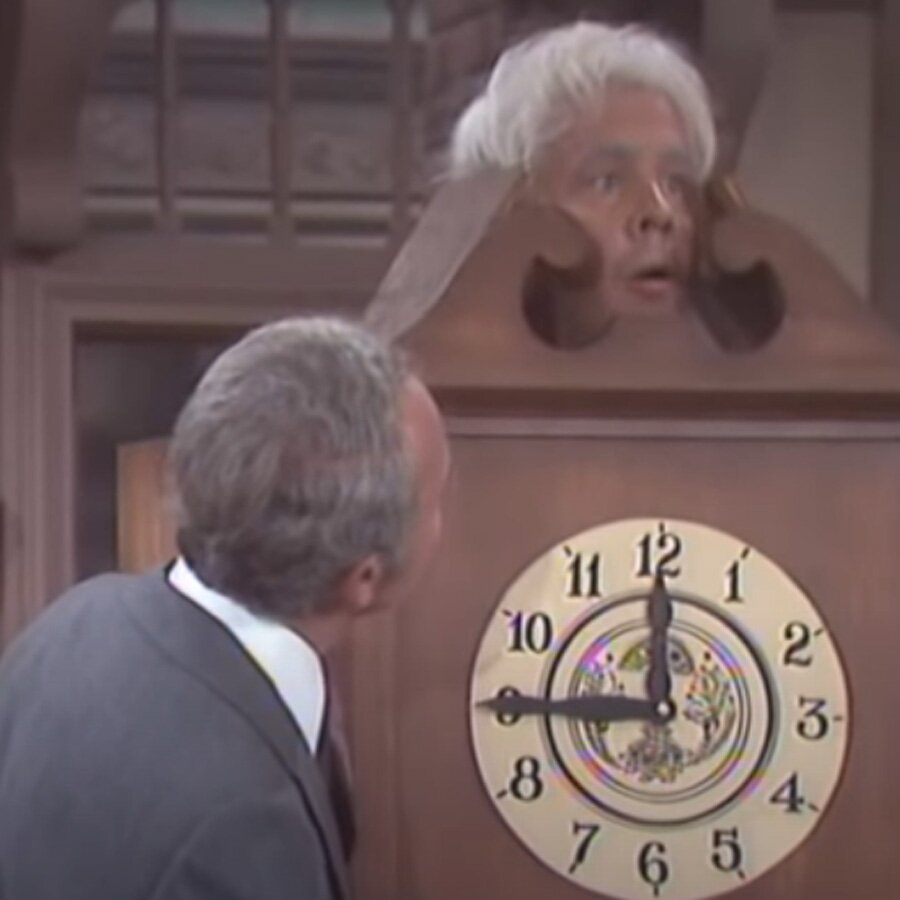 There's no better way to repair a clock than with a stethoscope and the question, "do you want to turn your head and cough?" But before this old-timer can even look at the broken grandfather clock, he must stamp away on a claim ticket for Korman's character to take, of course, in slow motion. Conway goes into the clock and breaks it even further, causing Korman's character to wreck the clock shop! 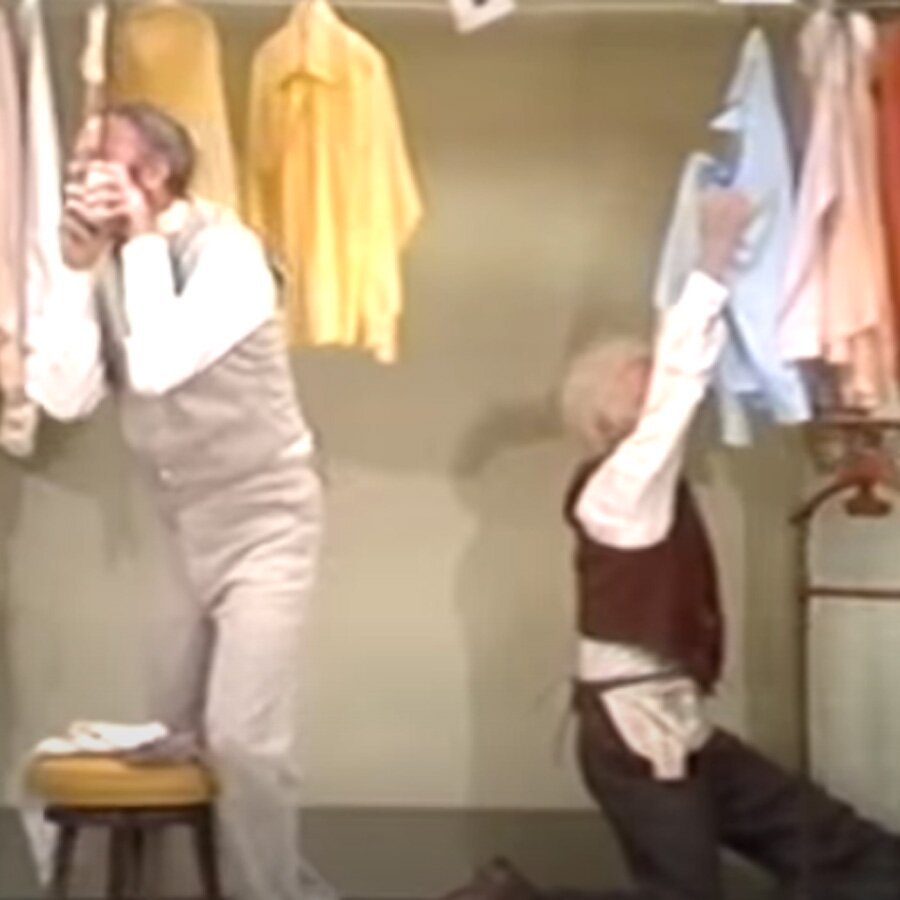 We told you it was Tim Conway's goal to make Harvey Korman break during a sketch, and in this one, where Conway is a wardrobe manager, just might take the cake. When Korman comes in looking for a change of clothes, it takes Conway several minutes to get started. He then washes Korman's wig with his hands, before falling to the floor with paper towels. When it comes to getting Mr. Henderson's clothes off the conveyor, Conway takes a ride and can't let go. The back and forth movement makes Korman laugh out loud, and this time he doesn't even try to hide the laughter, losing his fake mustache in the process.

SEE MORE: Tim Conway confirmed he made Harvey Korman wet himself during The Dentist sketch on Carol Burnett 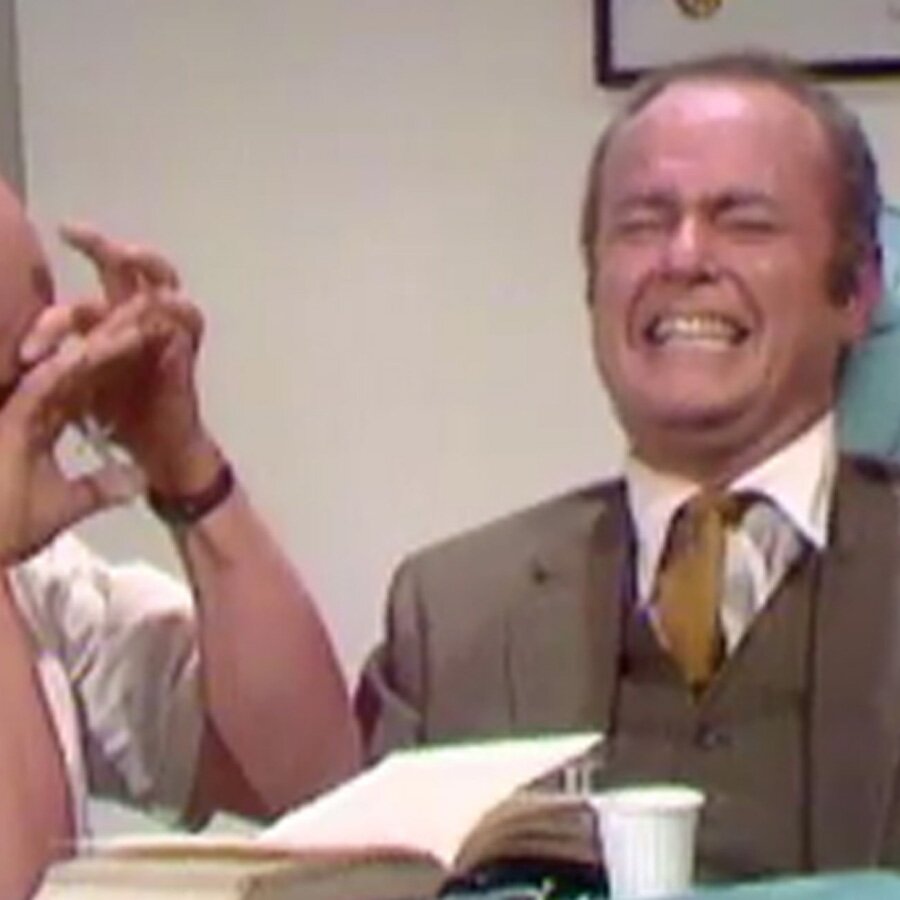 Conway said, "My objective was to find places in the sketch where I knew I could break up Harvey." Mission accomplished. 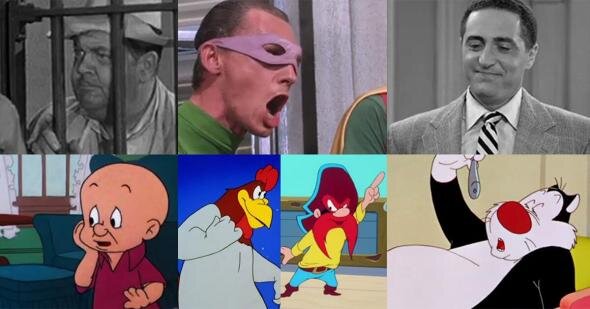 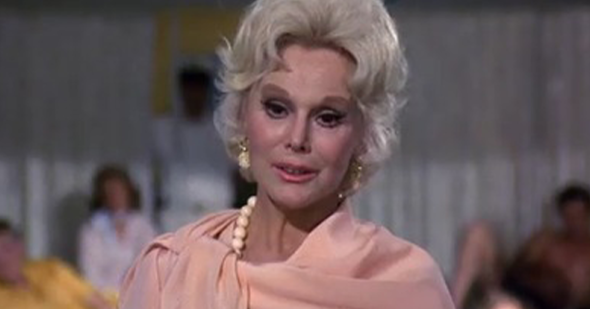 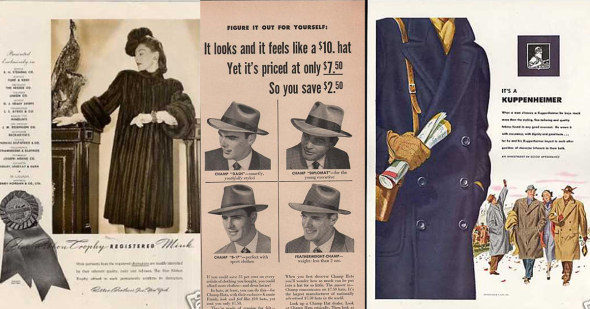 Holiday Retro
5 vintage ads from the 1940s that show the decade's cozy winter style
Are you sure you want to delete this comment?
Close

geatornez82 1 month ago
Interesting thing about the Elephant Story that people seem to forget, or may not even know. It never aired on "The Carol Burnett Show." I have a copy of the broadcast of the episode it was included in to prove it. No, the Elephant Story we all know and get hysterical at is actually a blooper that was later aired, quite possibly on "TV's Bloopers and Practical Jokes" (but don't quote me on that).
Like Reply Delete

TimothyMadigan 1 month ago
I'd add the nazi interrogator with the puppet.
Like (1) Reply Delete

jackbennyfan 1 month ago
Tim and Harvey worked so well together. So many things they did were very funny and fun to watch. It will never get old. They would not be good in vaudeville because Harvey couldn't keep a straight face. Lol.
Like (1) Reply Delete

MichaelVegas 1 month ago
Anytime those 2 were on the screen I was already laughing, it was such a great show with them.
Like (1) Reply Delete

WilliamLAllen 1 month ago
What about the plumbers who tried to hook the big fish in the bath tub drain? I remember Tim Conway's character saying "She would have made it ashore if she wasn't wearing her lucky ham".
Like (1) Reply Delete

DeannaT 1 month ago
I loved how they would laugh so much to where they couldn't say the next line! How fun ❤️
Like Reply Delete

PegWhiting 1 month ago
The dentist, the slow old man and don't forget Mr Tudball- the boss to Mrs Wiggins!
Such a gifted comedian 👏
Like (2) Reply Delete

JustGeri 1 month ago
The Dentist is my fav on this list. I do enjoy the elephant skit only that while Harvey Korman was an easy break, Carol Burnett was not. And in their mama‘s family skit, Carol as Eunice is clearly losing it throughout the whole time Tim Conway is talking. Vicki Lawrence was also a hard break and she’s barely holding it together. And Dick Van Dyke is not holding it together at all, he can’t even raise his head up and he is pushing his legs together as if he’s trying not to pee himself. And what really makes it special is that Tim Conway even can’t keep it together himself when he’s going on. Then Vicki Lawrence utters her unscripted line and Tim Conway falls to the floor and the camera zooms in on him, seeing him react is hysterical. I don’t know why he wasn’t there, but if Harvey Korman had been, I can easily imagine him falling on the floor within the first minute.

geatornez82 JustGeri 1 month ago
Vicki Lawrence was even harder to break.
Like (1) Reply Delete

LalaLucy 1 month ago
We love Tim around here. Definitely some favorite moments of his listed. Especially enjoy the old man sketches. In addition to the ones mentioned, I also love the butcher and the hot dog stand. My family is always talking about having "hot dags" and "chocolate shacks". Oh, and he makes such a great " Brashley" in Went With the Wind. When he starts in on the Camptown Races bit, it's such fun. Ah, there will never be another quite like him.
Like (1) Reply Delete

Robertp 1 month ago
I don’t understand why it was so funny but I crack up every time I see the elephant story. Tim was a Master of comedy
Like (3) Reply Delete

Dawn 1 month ago
Not a fan of the old man sketches, but Love The Dentist
Like (1) Reply Delete

MrsPhilHarris 1 month ago
I remember The Dentist and The Dresser. I know people love it, but I admit I did not find the elephant episode funny. 🤷‍♀️
Like Reply Delete 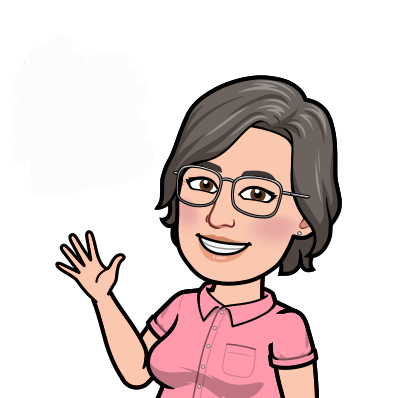 KJExpress MrsPhilHarris 1 month ago
Nor did I. Some of the sketches still crack me up, but that's not one of them. To me, a little bit of TC goes a long way.
Like (1) Reply Delete

BrittReid 1 month ago
Tim Conway was hilarious in everything he did. Starting with McHales Navy.
Like (3) Reply Delete