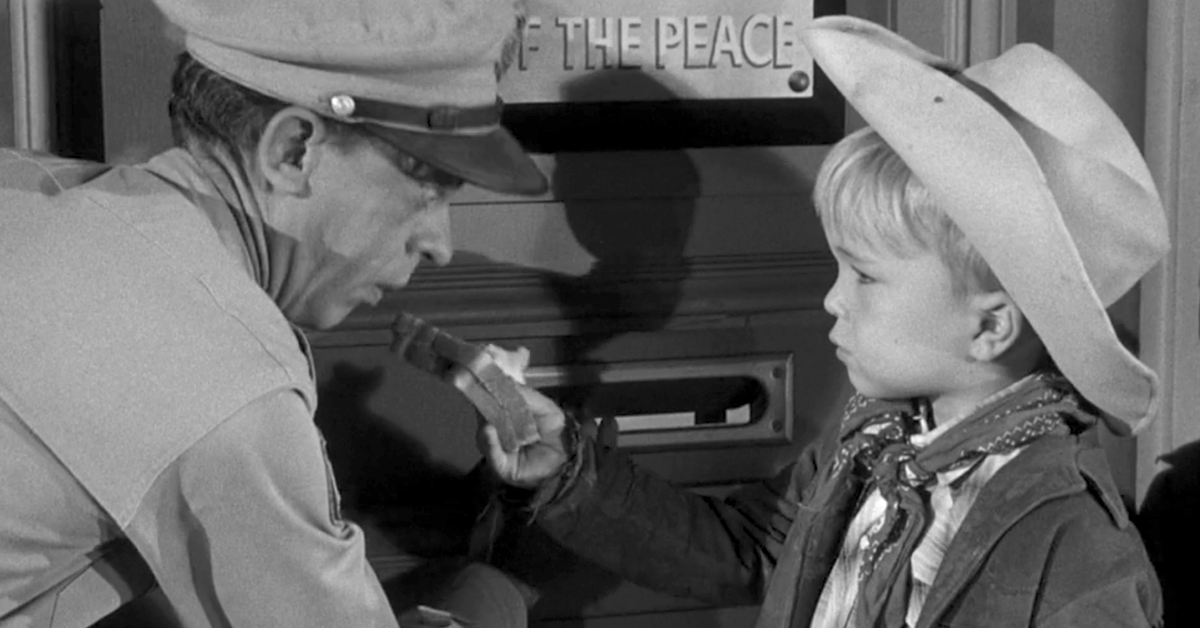 Like any small town, Mayberry was rich with inside jokes, and some of the most memorable ones became running gags that extended throughout The Andy Griffith Show's eight seasons.

Some were established early on, like Barney's clumsy trigger finger or Floyd's crooked sideburns. Others introduced characters we either never saw or rarely saw, but could always depend on for a quick laugh.

Here we've gathered our favorite running jokes from The Andy Griffith Show. We suspect these little touches form a big part of what made Mayberry such a special place. 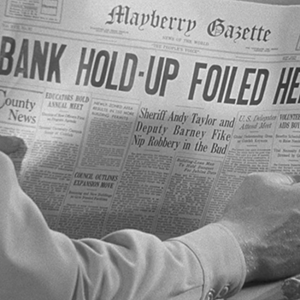 One of our favorite running gags from The Andy Griffith Show is the continued misspelling of Barney Fife's name each time it appears in the Mayberry Gazette. Most often his name is spelled "Fike," but rarely the proper "Fife"— that is, until "Barney and the Cave Rescue" in season 4, when Barney's name makes it into a bold headline that declares at last: "DEPUTY FIFE HERO." 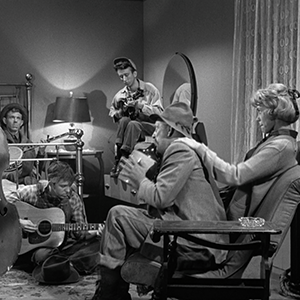 When the bluegrass band the Darlings first appeared in season three, their tunes added another layer of delight to each of their scenes. Probably our favorite part about the Darlings, though, is that no matter what song gets requested, Charlene Darling must protest, "But that one makes me cry!" Gets us every time. 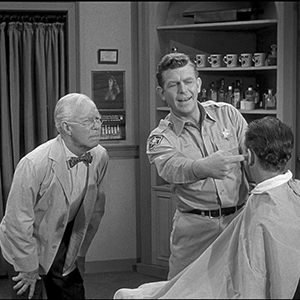 Floyd Lawson most memorably was played by Howard McNear, but the barber's longest running joke was actually introduced by his single-episode predecessor, Walter Baldwin. In the first season episode "Stranger in Town," it's established that Floyd can't trim sideburns evenly, and this becomes a joke the show returns to just about as often as the boys return to the barber's chair. During that initial episode, Andy gives Floyd a tip that the sideburns should lineup with the earhole, comically plugging Barney's ear with his finger to demonstrate.

4. Barney's gun goes off whenever it's loaded. 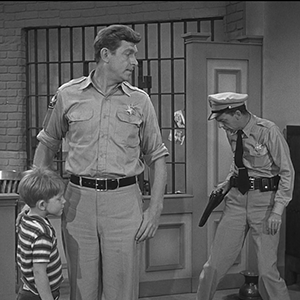 Throughout The Andy Griffith Show's run, Barney maintains a reputation for being a little clumsy with his trigger, seeming to shoot his gun off into the ground any time it's loaded. That's why Andy makes Barney keep his bullet in his shirt pocket. It's a running gag that never fails to get us grinning any time Barney loads his gun. Other good Barney gags: the way he walks into traffic any time he's in a huff, and how he crouches down into a low squat to waddle offscreen whenever a situation arises where he needs to be sneaky. 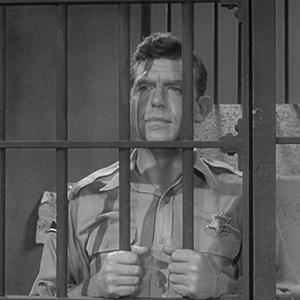 This one's sort of a combo running joke, where at various points throughout the show the keys to the jail cell are either within each reach for someone to escape the cell or else off the hook when Andy or Barney or both manage to get themselves mistakenly locked up. Both situations revolved around the jail cell key hook being kept way too close to the cell, meaning any time we saw the keys go on or off the hook, we could be sure high jinks would ensue. 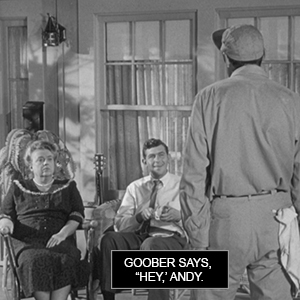 Before we officially meet Goober in season four, the character is already established through a memorable mention in season three that becomes a recurring joke on the show. In the episode "Man in a Hurry," Gomer plays the messenger between the car mechanic Wally and a visitor to Mayberry. When Gomer goes to Andy's house to report on the car's progress, he pauses before he goes to say, "Goober says, 'Hey,' Andy." This often repeated exchange seemed to get funnier each and every time. 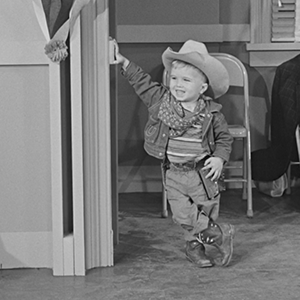 Leon the toddler cowboy tends to be munching on a sandwich any time he turns up on The Andy Griffith Show, and in some cases, he'll offer folks a bite. He's a quiet kid who never talks and was played by Ron Howard's brother Clint Howard. He's in five episodes total, and other than that he's a funny little mystery, with no telling who his parents are or why he's always wandering town alone. Whoever Leon really is, one thing's for sure, it always gets a laugh any time someone tells the tike, "Get on home" or "Move along, Leon!" 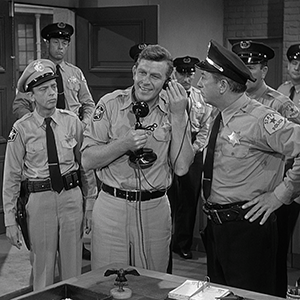 Mayberry's telephone operator (remember those?) was named Sarah, and her voice was dependably on the other end of the line any time someone picked up the phone. This made for a good running joke where her chattiness could get in the way of Andy's business, but Griffith was always a good sport about it, getting through the small talk to take care of whatever that day's trouble entailed.

9. SEE ALSO: 11 LITTLE DETAILS YOU MIGHT HAVE MISSED IN 'THE ANDY GRIFFITH SHOW' 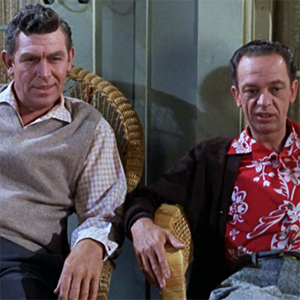 We put a magnifying glass to the screen to show you some small details from The Andy Griffith Show that might have slipped by your eyes. Let's zoom in and reveal fascinating trivia about the iconic series. READ MORE

RedSamRackham 3 months ago
* Since Leon never spoke maybe his dad was Mr. Shwump! ☺