Where To Watch Shop Store Contact
Home / Stories / 8 fascinating things you never noticed in the M*A*S*H episode ''Dreams''
Did you know?Deep Dive1970s

A medical consultant, a famous Toledo eatery and skilled magic all turn up in this haunting episode.

You may forget dreams when you wake up, but it is impossible to forget the M*A*S*H episode "Dreams." This surreal season-eight entry underlined just how different and daring the "sitcom" truly was.

The members of the 4077th are over-stressed and under-rested. The exhausted surgeons and soldiers sleep in the rare moments when they can — which leads to some haunting nightmares. Well, okay, Col. Potter enjoys his youthful polo flashback, at least.

Written and directed by Alan Alda, "Dreams" contains some of the most striking images and revealing character insights of the series. Let's take a deeper dive.

1. Nurse Connie was a nurse in real life and medical consultant on the show. 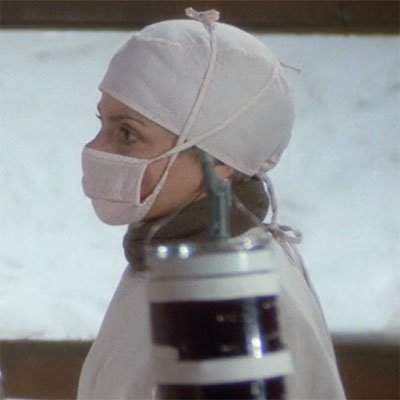 Connie Izay trained as a nurse. After some time in New Mexico, she moved to Los Angeles, where she worked as a first-aid nurse at Universal Studios. That real medical experience in Hollywood led to behind-the-scenes production work. Izay became a medical consultant Marcus Welby, M.D. Izay was more than a nurse — she also had acting experience on stage. So, she also landed some small acting roles, beginning as a nurse and anesthesiologist on Marcus Welby. She later served a similar dual role on M*A*S*H, working as a technical consultant on the show while popping up in a few episodes. Sadly, "Dreams" would be her final screen appearance. Izay died of breast cancer in 1982, a loss that deeply affected the cast and crew. The episode "As Time Goes By" (the final one to be filmed in production) was dedicated to her memory. It was the only time M*A*S*H made gave such a dedication.

2. Tony Packo's Cafe is a real restaurant in Toledo — at that exact address. 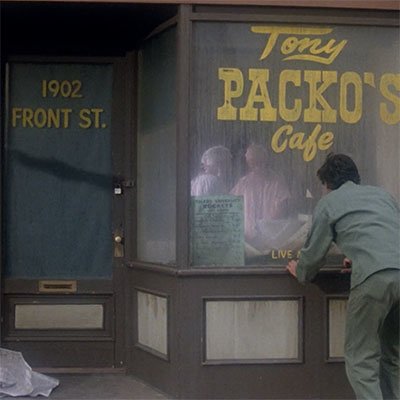 In Klinger's dream, he finds himself home in Toledo, Ohio. He wanders an abandoned downtown street before he comes to a restaurant facade. "Tony Packo's Cafe" the window declares. That's a real Hungarian-American restaurant in Toledo — to this day. Even the address is correct. It sits at 1902 Front Street.

3. Jamie Farr's real name is on a mortuary. 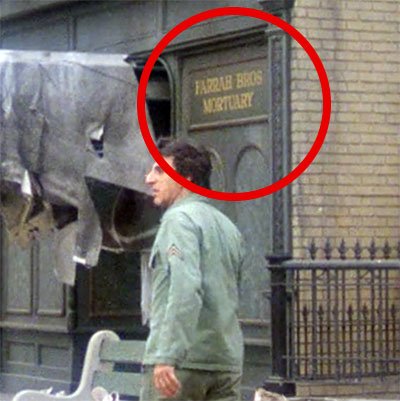 Before Klinger gets to Tony Packo's he passes "Farrah Bros. Mortuary." Jamie Farr was born Jameel Farah. This little easter egg underlines the constant fear of death that is fueling these nightmares.

4. David Ogden Stiers had experience with magic on Broadway.

In Winchester's dream, the Shakespeare-quoting surgeon imagines himself as a magician. At first, he performs for Klinger and others from the company. Then, he attempts to heal a patient on a gurney with magic, only to find that his tricks fail. Stiers was no stranger to magic. In 1974, he was part of the original cast for The Magic Show, a Broadway production centered around Seventies magic superstar Doug Henning. Stiers played "Feldman."

5. The subtitles spell out the gibberish. 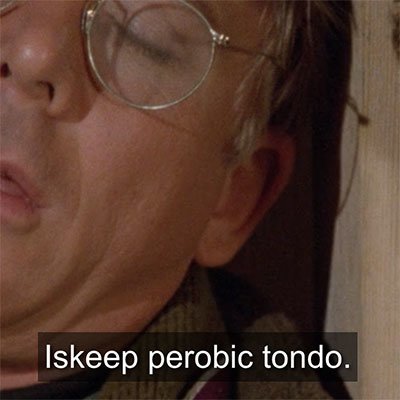 Father Mulcahy drifts off as a solider gives confession. The audience, like the drowsy Mulcahy, only hears gibberish. Ever wonder what the soldier is saying? Turn on the subtitles. It's not Latin nor some other foreign language. It's just fun gibberish: The first time was a bar in Seoul in which I trove sobbert in farley quince to civilar falamaries with closive infliches and depationary farven. So, of course, we started drinking and then I saw again staven in tusiflia thurgis. In frawl with sagullery purchel. But franges are gurvel, you know. Iskeep perobic tondo.

6. It's the first of two times we see Peg Hunnicutt. 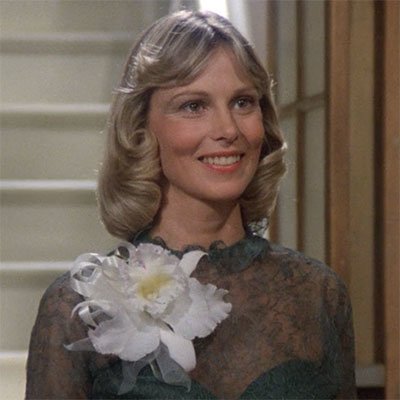 B.J. dreams of waltzing with his wife… until he is pulled away for surgery. This is the first we see of Peg (Catherine Bergstrom). She would appear in one other episode, "Oh, How We Danced."

The subplot in the awake world revolves around a foolish Lieutenant Garvey, who refuses to EVAC ambulances to the 4077th for fear that they might sustain damage from gunfire… in a war. It is the only time we see Rick Waln in the role of Garvey on M*A*S*H. Give credit to the prop department, though. He wears a pin on his lapel that is the Army Transportation Corps insignia. Lieutenant "Smilin'" Jack Mitchell wears the same pin in "Smilin' Jack."

8. Hawkeye was going to be in Margaret's dream. 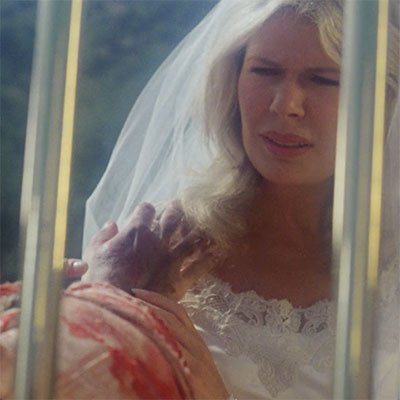 The Complete Book of M*A*S*H (Suzy Kalter, 1988) offers an interesting behind-the-scenes glimpse at this episode and what might have been left on the cutting-room floor. A production photo shows Hawkeye (Alan Alda) alongside Margaret (Loretta Swit) filming her dream sequence in the wedding dress. Hawkeye does not appear in the final scene, so they must have cut this part.

Dhinla 2 months ago
One of the great mysteries of this episode is who is James Jay Rubinfier. He is credited with Story By (with Alda). It looks like there is someone with that name who graduated from Beverly Hills High in the mid-1970s. And this person has never received another credit. So why did Alda share credit with him?

AlfonzoSmith 8 months ago
Sadly, Margaret's dream has been cut from the syndicated episodes I have seen.
Like Reply Delete

FredNelson 19 months ago
RE: the production photo of Alda next to Margaret's wedding bed. I've seen it; I don't believe it was ever planned to have Hawkeye in Margaret's dream. Remember, Alda wrote and directed this episode. So he would have been there when the scene was shot, and somebody snapped the picture while he was directing. Alda WAS dressed in Hawkeye's red robe in the picture - however, this can be easily explained as well. They were on an outdoor location shoot, and it makes perfect sense that they shot both Margaret's dream (middle of a field) and Hawkeye's dream (floating in a boat to a lake shore) on the same day and in the same general area. Alda just stayed dressed as Hawkeye throughout to save time and money.
Like Reply Delete

EmBee 33 months ago
I interpreted their dreams as follows:
Potter just wanted time to ride his horse (and perhaps play a little polo) but the war interfered.
In fact the war interferes with several of the dreams. Such as BJ just wanting to be with Peg. Margaret wanting a husband to be with and Klinger missing his beloved Toledo.
Then there are the others. Mulcahy wants to continue with his career in the church. Winchester feels as if he is performing magic in the OR saving lives and fears failing. Hawkeye wants to be able to save more wounded limbs and finds himself without arms surrounded by limbs.
Like Reply Delete

Josie92 33 months ago
MASH is also my fav show. This episode is the only one I cannot watch; too true to life. On the fun side, I love any episode with Colonel Flagg!
Like Reply Delete

EmBee Josie92 33 months ago
Flagg or Dr Freedman. And they were in at least one episode together.
Like (2) Reply Delete

ChuckJohnson EmBee 24 months ago
"I'd like to examine you, Flagg, but with your schizophrenia, I'd have to charge you double."

LynCarceo ChuckJohnson 19 months ago
One of my favorite expressions of Sidney's.

Suwho 34 months ago
I have many favorite shows with MASH being my number 1. I've never liked dream sequences in any show, can't explain whh y just don't. This is the only MASH episode I will never watch. Love the rest.
Like Reply Delete

Cathy 34 months ago
I would have loved to have seen Hawkeye and Margaret get married, then when they woke up ask if they dreamt the same thing.
Like (2) Reply Delete

Jeffrey 34 months ago
for as funny and creative the early eps were - they steadly got more depressing and morbid - this one takes the cake - cant watch it - even with a buzz on:)- with other one when Henry gets shot down going home..sorry MASH fans - but after that ep - all eps got more and more morose
Like (1) Reply Delete

RandyJepsen 34 months ago
I wonder why Col Potter wouldn`t want to go back & continue his dream. It wasn`t like the others.
Like (1) Reply Delete

Wiseguy RandyJepsen 34 months ago
He did. He was sorry Klinger woke him up.
Like (1) Reply Delete

DwWashburn 34 months ago
The second worst episode of the series after "Goodbye, Farewell and Amen".

ChuckJohnson 34 months ago
Passing through Toledo a few years back, we made it a point to have lunch at Packo's. Good food, reasonable prices, and MASH (and Packo's) trinkets for sale.
Like (7) Reply Delete

Utzaake 34 months ago
4. Most memorable scene is Winchester helplessly tap dancing with a lit sparkler in each hand at the end of his dream. 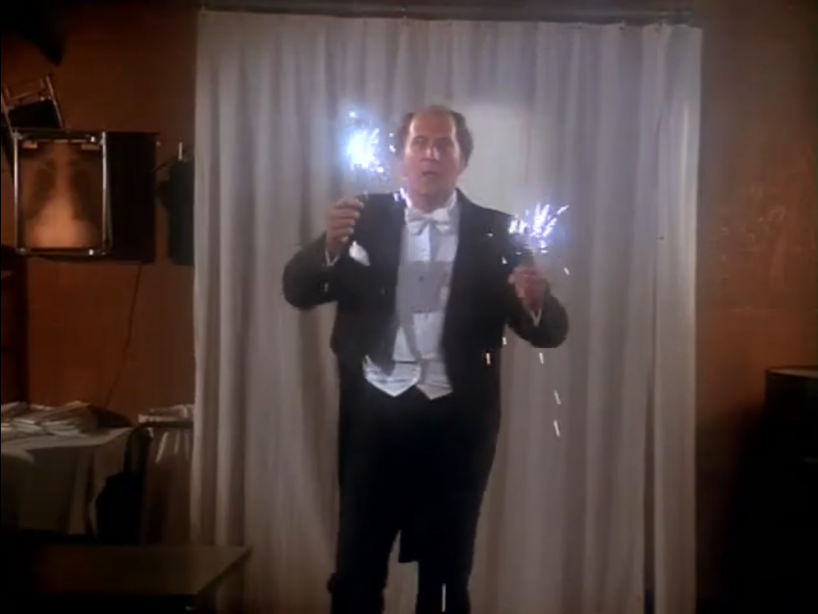 DiamondGold 34 months ago
Does anyone know if when metv is changing schedule for spring or the summer?

MaryO1960 34 months ago
Just really enjoy watching me TV. Ask my husband I'm in the other room watching me TV while he's watching whatever😀😊
Like (1) Reply Delete

harlow1313 34 months ago
I think this is one of their most creative episodes.
Like (3) Reply Delete

Wiseguy harlow1313 34 months ago
They should have done it while Radar was still there.
Like (4) Reply Delete