6 vintage microwave ads show the evolution of nuking your food

Who among us hasn't been burnt by the popcorn button? 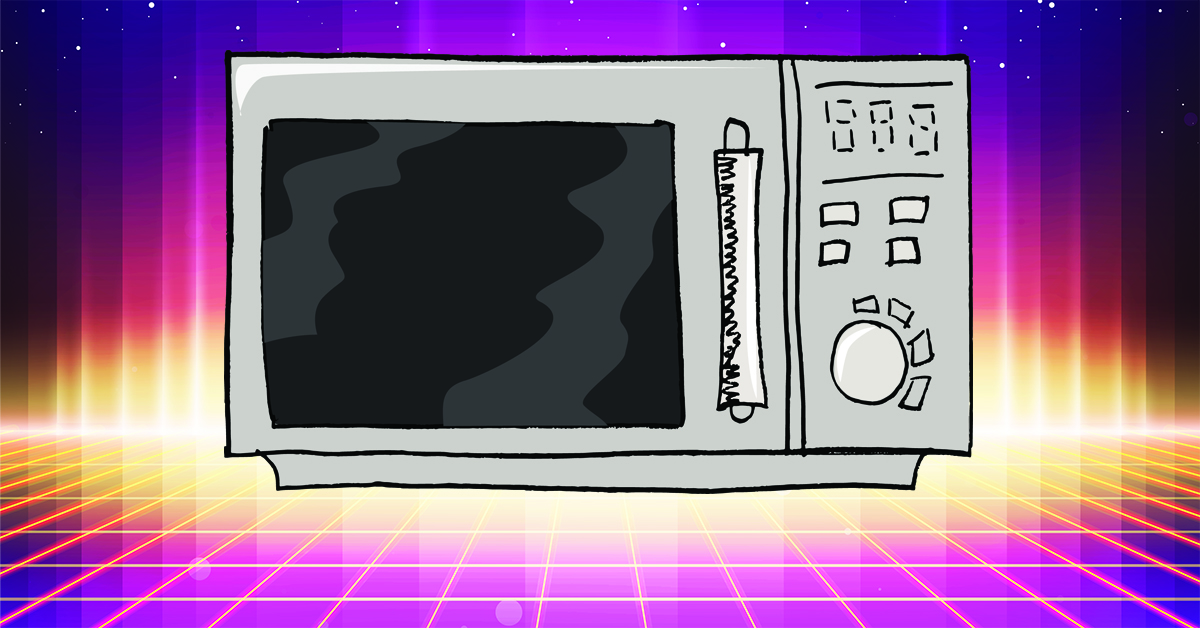 For many TV fans, nothing goes better with your favorite show than a bag of buttery popcorn. Popcorn was actually one of the first things that microwave inventor Perry Spencer decided to make with his new machine, and people have been popping corn using his technology ever since. This explains why the microwave-makers at Sharp have recently teamed up with Orville Redenbacher to attempt to perfect the popcorn button on the box you keep in your kitchen.

Skeptics may scoff, their nostrils immediately flaring to recall numerous failed attempts to set and forget popcorn using the popcorn button that's been a fixture on microwaves since the machines debuted. For many of us, this yielded burnt kernels more often than perfect popcorn. Same goes for other preset microwave buttons, from "baked potato" to "full dinner." The inconsistency of the effectiveness of these buttons is basically the only consistency between microwaves over time.

Either way, Sharp's modern mission to evolve the popcorn button continues the legacy of the microwave’s sincere hopes to remain as central to homemakers as the TV box (or more aptly now, screen) they keep in their living rooms. With its great heft, the first microwave was invented in 1945, clocking in at 750 pounds and destined to diminish cook times for housewives like a hunky kitchen savior. It would take more than two decades before microwaves would become cost-effective enough to fully infiltrate kitchens across America in the 1970s. 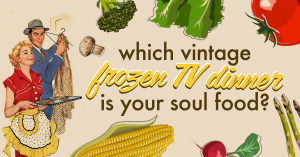 food
Which vintage TV dinner is your soul food?

That’s the price range most college kids now are used to forking over as part of the ritual of leaving home, acquiring their first microwaves and proving the microwave’s staying power, despite its scary early warning labels that threatened radiation, cataracts and skin burns.

Beyond the buttons, early features that were introduced to improve the microwave included adding a second timer to help with longer cook times, an interior light to help you check your progress, a glass tray so you didn’t have to dirty a plate, and eventually a browning element to help housewives who found the grayish color of microwaved meat unappealing. (Weird, right? Who doesn't want to eat gray meat?)

Do you remember the pre-settings from your first microwave? Revisit these vintage ads featuring classic microwave models to recall the peculiar evolution of microwave settings. 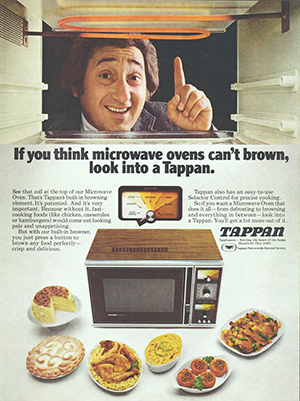 Tappan was the first to come out with a microwave for home use in the mid-1950s, but this model from a few decades later likely fit into a lot more budgets (and thus, a lot more homes). The controls on this model weren't buttons, but knobs, with muted orange shades on the selector to take you from "keep warm" to "stew," "defrost," or "bake" your food. 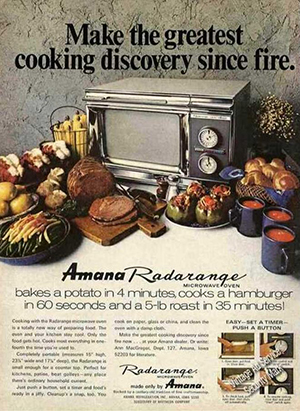 Although Tappan broke ground with their first domestic microwave model, the Radarange was the first commercial microwave model, debuting in 1947. This ad shows an updated model from the 1970s, still simplistic and equipped with just two knobs for time and temperature.

Early microwave adopters likely have fond memories of spinning the dials on early 1980s models like those featured here. While Philips, Hitachi and Tricity worked fine with just one knob, you can see the beginning of later microwave customizations with Sharp's 4-knob system. On this Sharp model, settings let you warm, defrost, roast or for the daring, just set it to "dinner." 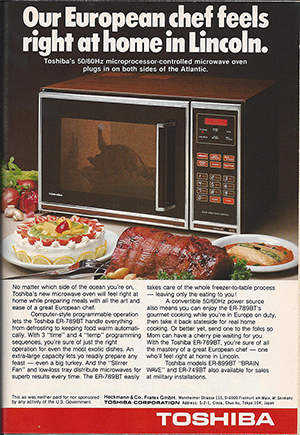 Features from this early 1980s Toshiba microwave included standard settings like auto defrost, power level and time and temperature, but also a memory function. We're guessing that way your microwave always remembered your Hungry Man each time it came around. 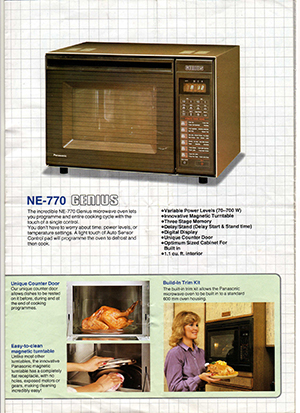 As microwaves competed for homemakers' hearts, Panasonic introduced their "genius" series, with automatic sensors to make sure you didn't overcook the pork. On this model, cooks can choose between settings with curiously specific ranges, like one setting for fish and frozen peas, and another for reheating casselores and stewed fruits. 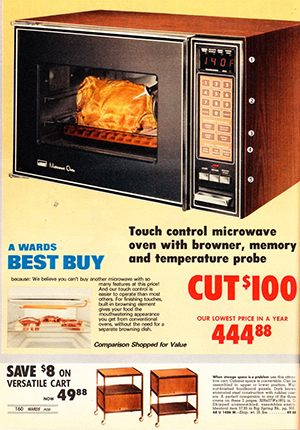 As the microwave grew to become a beloved kitchen gadget, microwave makers got cute with settings, adding "gourmet" settings on later models like this one from Montgomery Ward in the mid-1980s. If you were around back in the day, you might chuckle to remember sometimes this particular retailer would chuck in a free frozen turkey if you bought their model of microwave.

RedSamRackham 23 months ago
* if you've ever zapped a slice of leftover deep dish pizza for breakfast you're indeed a real Chicagoan! ☺
Like Reply Delete