Thanks to budget boxed Halloween costumes, and kid could dress up as the Fonz, Chachi, Barbarino, Jaws and more 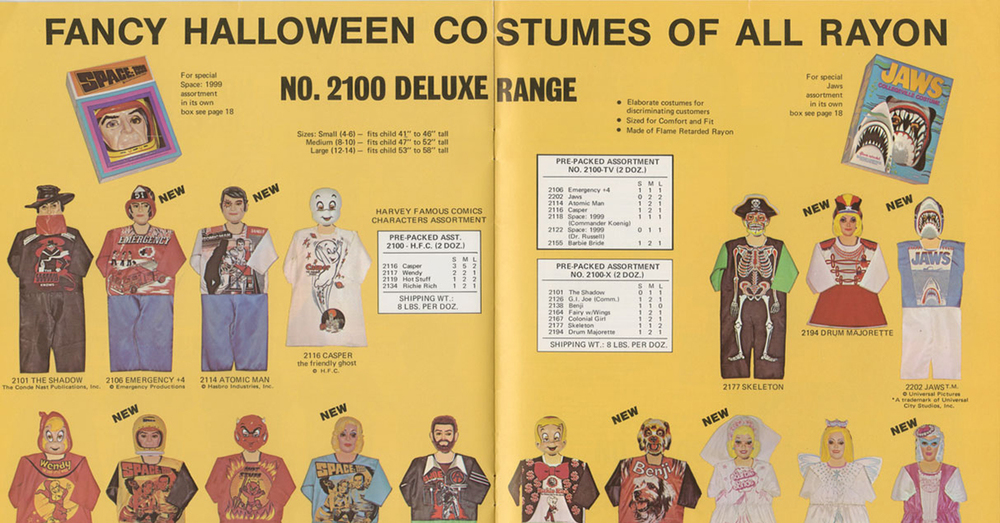 Share
No sense triggers our memory quite like our sense of smell. One whiff of rubber cement and a first grade classroom rushes to the forefront of the mind. Likewise, the synthetic odor of Halloween masks conjures vibrant images of crisp October evenings, giggling parents and mounds of Mounds. As colorful as they may have seemed, those masks were hardly fun to wear, especially the stiff, low-price ones you would pick up in the drug store. The edges of the eye holes dug into your skin. The thin rubber band, held on by staples, would snap. A cold flop sweat would quickly develop over your face inside the thing. And yet, seeing these old boxed costumes makes us want to be 10 years old again.
For decades, three companies cornered the market on the budget Halloween costume — Ben Cooper, Collegeville and Halco. They all scrambled for licenses, which could send them to the top of the heap, as Ben Cooper found out with its lucrative Star Wars deal. The selection of pop culture properties was stunning. Seemingly every television show had a Halloween costume. Children could dress up as Father Murphy or Dr. Kildare if they so desired. The better costumes worked as a complete outfit with a cartoon face. Too often, however, kids got an eerie human(ish) face atop a poster printed on, what seemed like, a garbage bag.
We dug around to find twenty of the funniest, most unexpected boxed Halloween costumes. Today, these babies can fetch serious money on the collectors' market. Did you save yours? 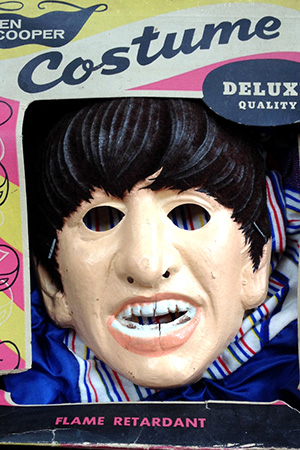 The mask worn by Michael Myers in the Halloween movies was famously, and cleverly, made from a William Shatner mask painted white. They could have used this as is. 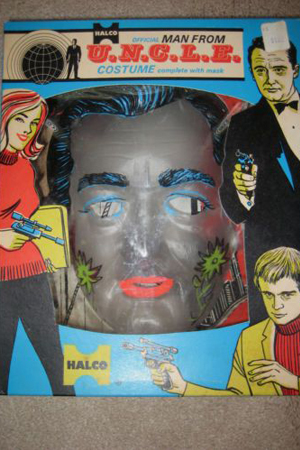 The transparent masks fully obscured your face, and never correctly depicted the character, so you ended up with this eerie bank-robber mish-mash. Before they could afford fancy robot helmets, Daft Punk wore something like this Napoleon Solo mask in publicity photos. 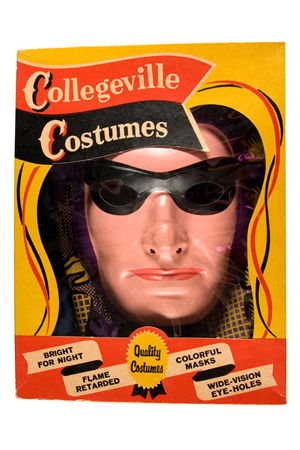 We could have sworn that was Roy Orbison. 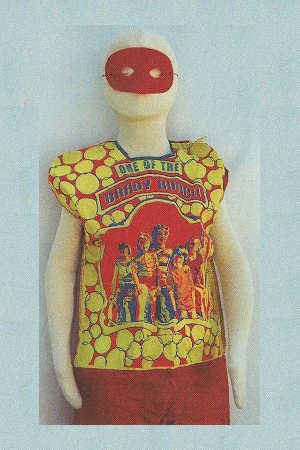 This outlier is a true head-scratcher. Instead of a mold made from Marcia's face we merely get a Lone Ranger eye mask. The shirt vaguely proclaimed "One of the Brady Bunch." Was there an episode where they went into witness protection? 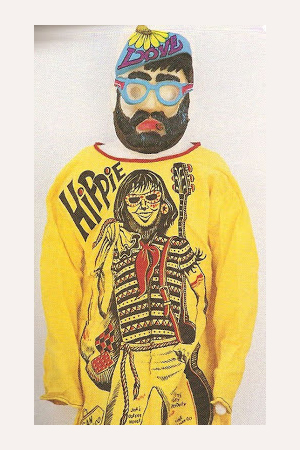 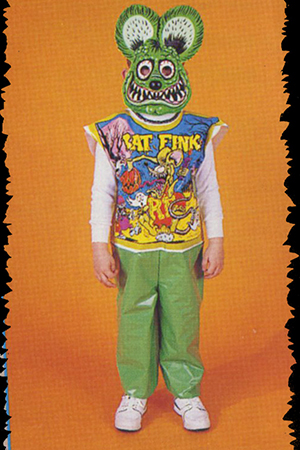 Ed Roth's hot-rod character inspired a few costumes over the decades. It's hard to image this six year old being terribly excited about restoring a Bucket T. We're guessing dad would be more likely to pick this out of the catalog. 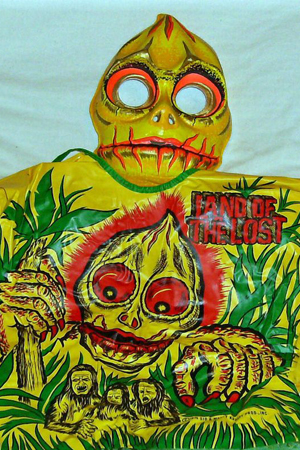 Sleestak! Honestly, this looks close enough to the onscreen version of the creature, more so than other representations on this list. It's just a cool, creepy design to begin with. 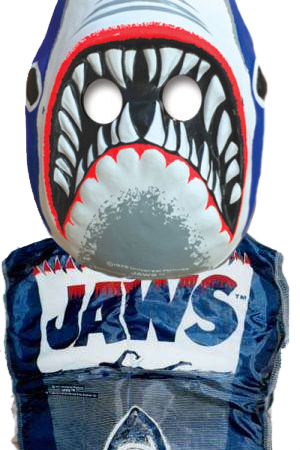 There is no good way to turn the long, pointed face of a sea creature into a flat, 2D mask. This perspective, with the eye holes in the mouth, is so unexpectedly off, it ends up being rather unintentionally chilling. 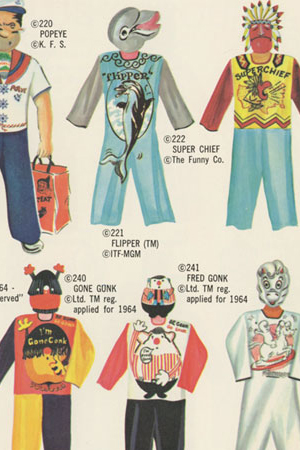 Flipper suffered from the same problems as Jaws. Collegeville, however, decided to go for the profile approach, with two human eyes oddly peering out from one side of a dolphin's face. Harder to explain on this page, however, are the two Gonk outfits, Gone Gonk and Fred Gonk. The trendy toy of 1964 — think Beanie Babies or Troll Dolls, younger generations — were turned into masks. With another Gonk on the chest, the kid ended up looking like a Gonk standing atop a Gonk. On the lower right, take note of Nightmare, Casper's horse, appropriately named here. 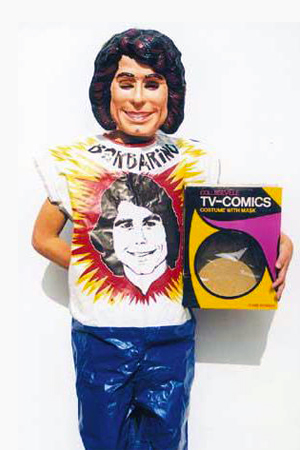 Another face-atop-face approach. The white smock made it look like you were getting your hair cut, which hardly seems appropriate for Barbarino. A Kotter mask was available, too, if you wanted a mustache. 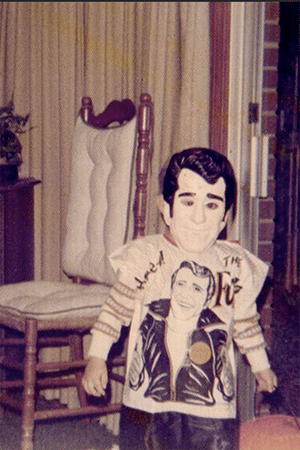 The legendary iteration of the face-on-face costume was this Happy Days outfit. Why not just make the costume an open leather jacket over a white tee? Why are these costumes a character wearing a picture of a character? It never made much sense.
Photo: Flickr/rpchurch 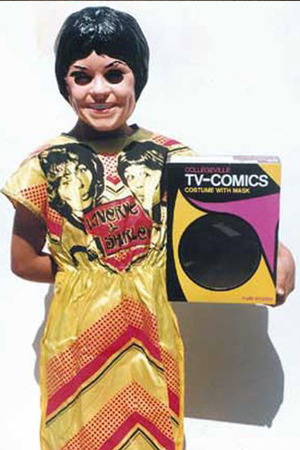 Here is Cindy Williams / Shirley Feeney. Supposedly. It looks more like that Barbarino mask above post-haircut. 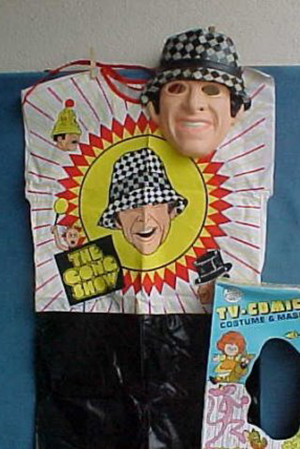 The Gong Show was a brilliant, comical precursor to the talent competitions of today. As big as American Idol is this millennium, we can't imagine children wanting to wear a Simon Cowell mask. But Chuck Barris was cool. Alabama fans, if you wore a gray suit with that mask, you could pass for Bear Bryant. 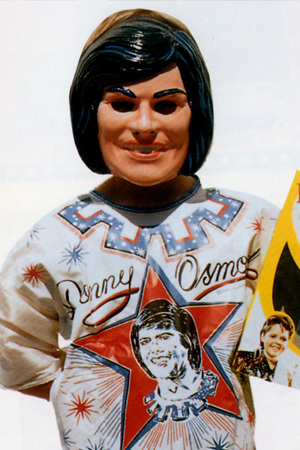 Okay, now it's started to make sense, why they printed the name of the costume across the chest. How else would candy-givers know how to describe a costume? "Oh, what a cute… Donny Osmond," they would say, fighting the urge to guess… Betty Ford? Tattoo?

15. Morgan Freeman of The Electric Company 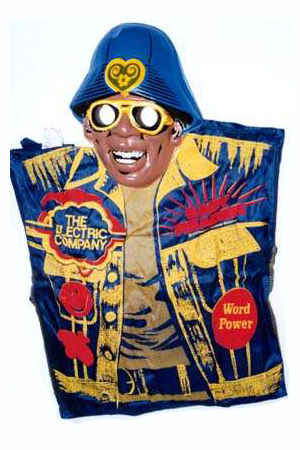 Before he played God, Morgan Freeman was a regular on The Electric Company, playing the hip disc jockey Easy Reader. The costume designer, however, seemed to have Fat Albert on the mind. 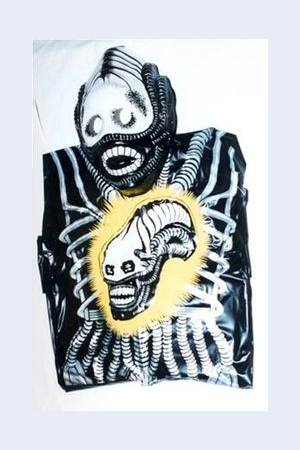 More H.R. Pufnstuf than H.R. Giger, this depiction of the alien in Alien was far more toothsome and pale than his sleek movie iteration. It's completely wrong as far as being true to the film, but it's kind of a cool horror mask in hindsight. 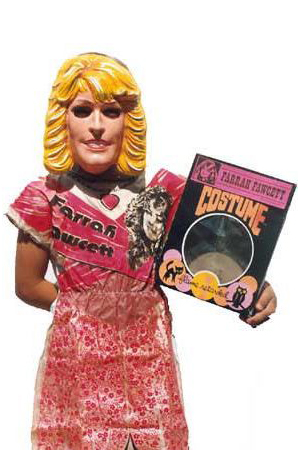 Farrah Fawcett's red swimsuit poster of 1976 was a bigger hit than most blockbusters of the era. Hence, the actress and model was the subject of her own Halloween costume before a Charlie's Angels outfit came along. 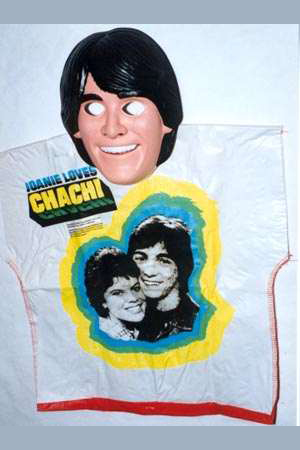 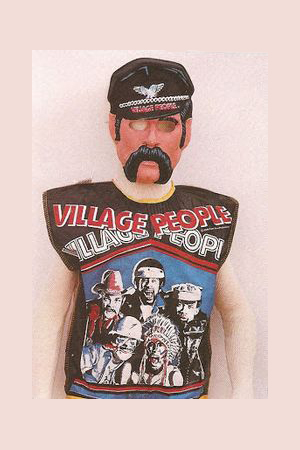 Discomania was at is peak when The Village People costumes hit shelves. Thing is, the Village People were already wearing costumes. Here is Glenn Hughes, a.k.a. the Biker one. Filipe Rose, the Native American, was also available. 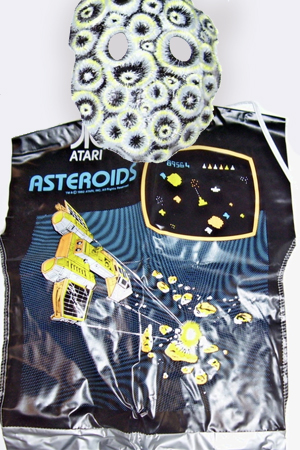 Turning 8-Bit videogame graphics into a detailed mask could be problematic, especially when the game is about shooting rocks in space. So this costume, based off the 1979 smash Asteroids, ended up looking like a severe dermatological disorder.
Are you sure you want to delete this comment?
Close

I loved these costumes - it's like the entire design budget went into the mask, and then for the costume they handed it to Kevin from accounting, who took an art class in college.