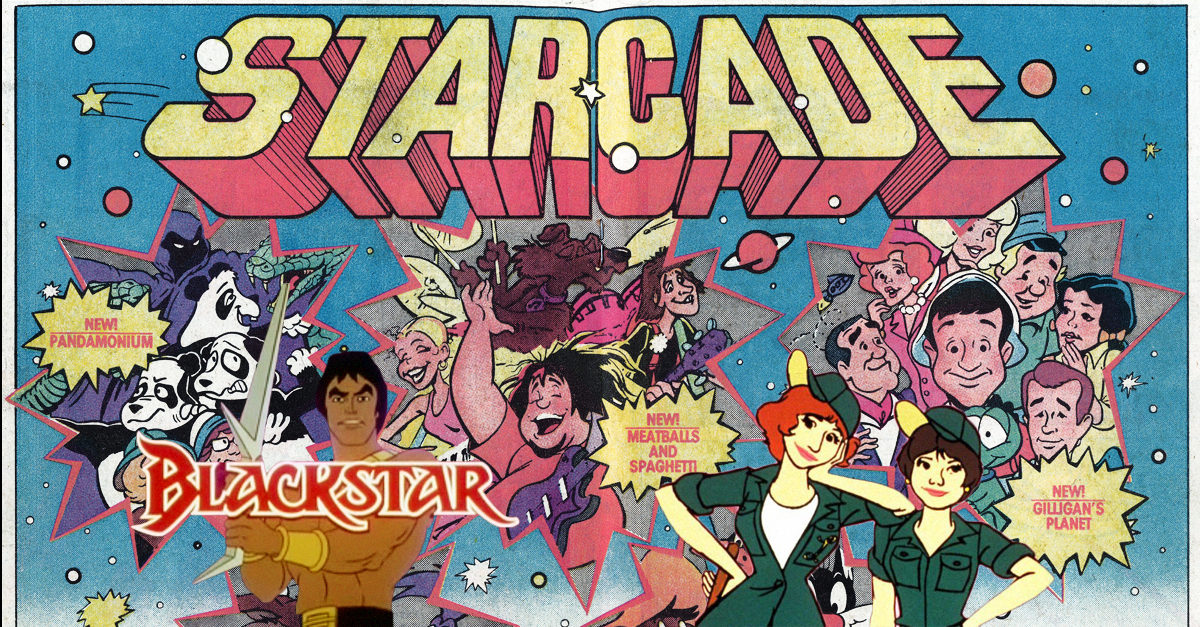 The 1980s were where cartoons got weird. The 1970s may have cornered the market on psychedelic live-action children's fare — thanks to Sid and Marty Krofft — but the animation concepts of the Reagan era were outright kooky. They blended marketing tie-ins, Dungeons & Dragons–like fantasy, celebrity, video games, adorable creatures and adventure.

These toons tried to be everything to every kid. Which is why you'd end up with a show featuring a Humphrey Bogart–like ape from a line of greeting cards that fought crime in an amphibian supercar. The toy market drove everything.

So we flipped through the Saturday morning lineups from the early years of the decade. Here are some of the stranger shows from the era. Pop open a Hunts Snack Pack and let's flash back. 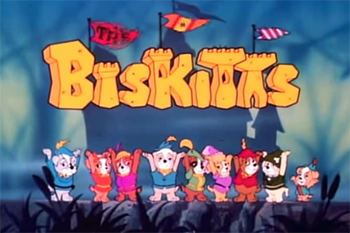 The Biskitts were "the smallest dogs in the world," a sort of Pound Puppies meet the Smurfs meet Medieval Times. The Hanna-Barbera production lasted a mere season, but lived on with military kids overseas as it was picked up by the Armed Forces Network and shown throughout the decade. 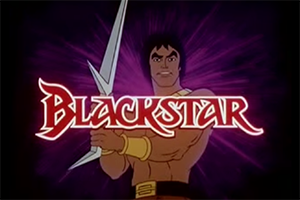 A little bit Flash Gordon and a whole lot of He-Man, John Blackstar was an astronaut "swept through a black hole into an ancient alien universe," or so the intro exclaimed. With his trusty Starsword, the topless hunk protects the peaceful Trobbits of planet Sagar. To Blackstar's credit, his Filmation-produced show actually predated He-Man and the Masters of the Universe. 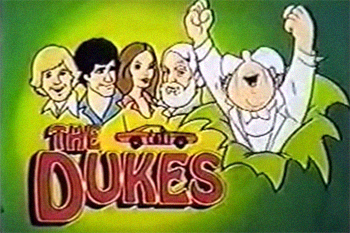 Despite their probation, the good ol' boys of Hazzard travel the globe on the run from Boss Hog. A different set of Dukes — Coy and Vance — were the stars of the first season. Bo and Luke (voiced by live-action stars Tom Wopat and John Schneider) took over the wheel for the second and final season of the Hanna-Barbera production.

The diminutive Diff'rent Strokes star spun off his TV movie, The Kid with the Broken Halo, for his cartoon showcase. Coleman's character was an angel earning his wings by helping others. The Hanna-Barbera Production lasted an unlucky 13 episodes in 1982. 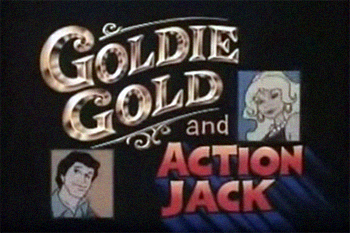 Of no relation to Richie Rich, Goldie Gold was a young millionaire heiress who inherits a publishing fortune. She jets the globe with reporter "Action Jack" Travis and her pooch Nugget — flying in a glass-topped airplane with a swimming pool. 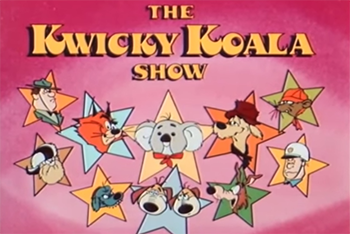 Animation legend Tex Avery produced this late-career obscurity for Hanna-Barbera. The cuddly star was similar to Avery's Droopy, a marsupial on the run from a wolf that sounded remarkably like Paul Lynde. (It was not Paul Lynde.)

7. Laverne & Shirley in the Army 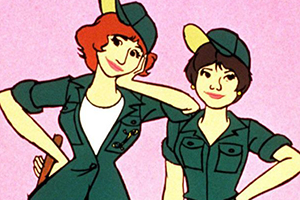 Penny Marshall and Cindy Williams actually voiced their animated incarnations for Laverne & Shirley in the Army, which appeared on Saturday mornings in the fall of 1981. This being a cartoon, the plots got weird, as the two military newbies faced off against aliens, werewolves and Bigfoot. Commanding over them was Sgt. Squealy, a talking pig, who was voiced by Ron Palillo — a.k.a. Horshack of Welcome Back, Kotter. 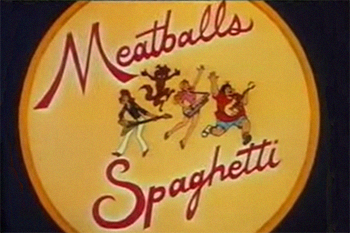 Meatballs & Spaghetti were a husband-and-wife rock duo who toured the country in a mobile home. Their dog was the drummer. Hey, why was Meatballs billed first, despite the fact everyone says "spaghetti and meatballs"? This Marvel Production was made for CBS in the 1982–83 season.

The Marvel Production will probably not be rebooted soon. In one of the most convoluted concepts ever, two humans team with the talking pandas Chesty, Timothy and Algernon to take on an evil, alien, telekenetic wizard named Mondraggor. The three pandas could combine, like Voltron, to form the powerful Poppapanda. Sure, why not.

ABC found success in the late 1970s with a series of short specials based on the book The Puppy Who Wanted a Boy. The four animated specials led to a regular series which ran from 1982–84. Initially titled The Puppy's New Adventures, the series renamed itself The Puppy's Further Adventures for season two. One of his dog pals, Glyder, could fly with his giant ears. This skill certainly helped in outings like "The Puppy and the Spies." 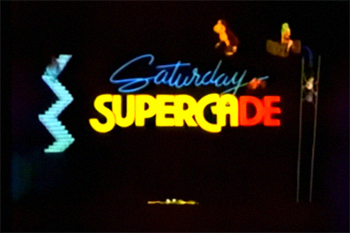 Arcade games ruled pop culture. They had their own cereal and television shows. Saturday Supercade rounded up the most popular quarter-eaters — Frogger, Donkey Kong, Q*bert, Donkey Kong Jr., Pitfall, Space Ace and Kangaroo. (If you forget the latter, no worries. It was a joystick masher made by Atari in 1982.) Soupy Sales was the voice of Donkey Kong! 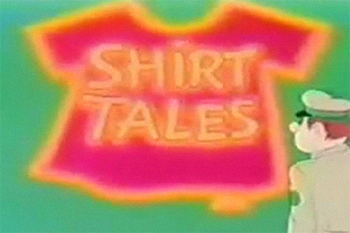 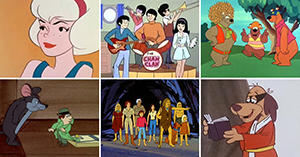 Get down to the Funky Phantom, the Hair Bear Bunch, Bailey's Comets and more. READ MORE

AngelW1972 5 days ago
I had a cat named Black Star. He had long black hair with a white star shape under his chin. I remember when that cartoon was on tv. I loved Tyg on shirt tales. I also names a gray and white cat Tyg. My grandma had gotten me a bunch of the shirt tales dolls. I put Tyg on my hat when I played softball ⚾ back in the summer of 1985, I was 13.
Like Reply Delete

PeterPaps 11 months ago
Hey all check out this online community that's dedicated to the eighties. www.WeLovetheEighties.com.
Like Reply Delete

Brambleyote 16 months ago
The Puppy's New/Further Adventures was my favorite cartoon when I was a kid! I wanted a dog like Duke so badly!
Like (1) Reply Delete 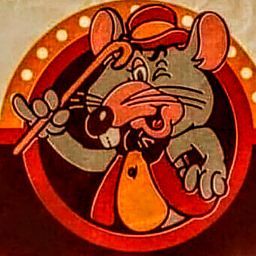 Idleprimate 19 months ago
I remember The Kwicky Koala Show--I had no idea it was Tex Avery. Cartoons did get weird, mashing things together randomly and throwing in absurdist elements. Let's not forget that Laverne, Shirley and the anthropomorphic pig were joined by Fonzie and his talking dog. all the video game cartoons were awful, though by then I was hitting an age where my interests were drifting from Saturday Morning Cartoons.
Like (1) Reply Delete

AdamCampetti 32 months ago
Great list. i think more people remember numbers 1, 11, and 12 though. I wish METV would get rights to air all of these on Saturday. Especially the Saturday Supercade line up including Pole Position, Space Ace, and Kangaroo.
Like (1) Reply Delete

VaughnBaskin AdamCampetti 23 months ago
Maybe someday, but right now MeTV is focusing on bringing ever MGM, Hanna-Barbera, Ruby-Spears, and Sid and Marty Krofft shows to our lineup!
Like Reply Delete