Find the stomping grounds of Lucy, Kotter, The Odd Couple and more plotted out on a map. 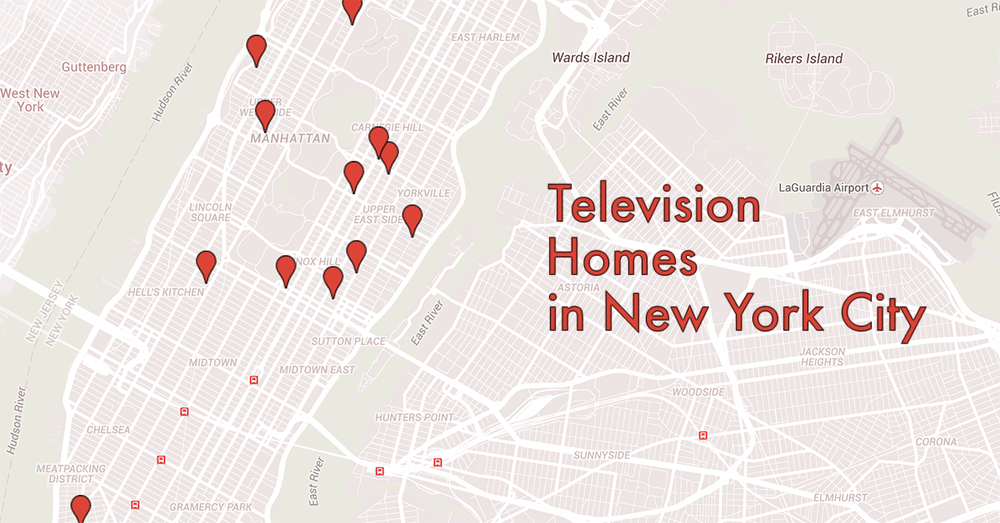 Though New York City is favorite location for television shows, it's no secret that few series are actually filmed there. The production biz is out west. A handful of classic shows were shot in the Big Apple, however, like Car 54, Where Are You?, Naked City and The Cosby Show. Otherwise, the real NYC only pops in some exterior establishing shots and opening credits montages. Even Seinfeld, the ultimate New Yorker sitcom, was made in Hollywood.

Though Jerry, George and Elaine — not to mention Lucy, Ricky, Archie, Oscar, Feliz, Kotter, the Sweathogs and many others — were fictional characters, they lived in real neighborhoods. For the most part, they lived at real addresses. Sometimes, street numbers were fibbed, or the name of a police precinct was changed. Despite some gray areas, we plotted out where classic TV characters lived in the five boroughs. (Well, four. Sorry, Staten Island.) It's fun to imagine the characters bumping into each other on the street.

The Upper East Side is the most popular haunt, but we found dwellings in Brooklyn, Queens and the Bronx, too. Do you live in New York like these characters? You can now catch MeTV on WJLP TV. Explore the map and check out the key below. Know of any others? Let us know and we'll add them to the map. We'd love to visit Rhoda's parents in the Bronx.

All in the Family

Fake address, real house. You won't find the onscreen listing of 704 Hauser Street in Queens. However, the house at 80-70 Cooper Avenue should be quite familiar to fans of the Norman Lear classic.

Filming for the comedic cop show took place around the Gold Medal Studios at 807 E 175th Street in the Bronx.

Willis and Arnold were just down the street from the Odd Couple at 900 Park Avenue.

The posh pad can be found on E 62nd Street.

The coffee lovers dwelled in the Village on the corner of Grove and Bedford. Kate & Allie must have been nearby.

Though the show claimed the 328 Chauncey Street resided in Bensonhurt, the address actually plots in Bed-Stuy. It's the honest-to-god home of a young Jackie Gleason, too.

Alas, the Ricardos impossible address of 623 E 68th Street puts Lucy and Ricky in the East River. We figure they were somewhere between the park and the river.

The family moved on up to a deluxe apartment at 185 E 85th Street.

The lollipop lover's 11th Precinct was filmed at the real 9th Precinct at 321 E 5th Street. This station is a popular one for small screen crime fighters. Cagney and Lacey, NYPD Blue, Castle and Person of Interest are also based here.

The apartment was supposedly in the Village, but the exteriors were shot at 5th Ave and 12th St.

Like Car 54, Naked City was primarily shot in the Bronx, though 65th Precinct building was shot at 306 W 54th Street.

Oscar and Felix would have to be millionaires today to have a place at 1049 Park Ave. A three bedroom in the building will run you about $4 million.

The Huxtables abode sat in Brooklyn Heights, albeit on a completely fictional address, 10 Stigwood Avenue. Duke's Lane family, on the other hand, listed a quite real address of 8 Remsen Street in the neighborhood.

The addresses all made sense for the characters. George was by the river, Elaine across from the park, Jerry closest to downtown.

Alas, the garage at 534 Hudson Street no longer stands. If the Friends call a cab, we like to imagine Judd Hirsh picking them up.

Continuity here is rough, but we know that Ann Marie dwelled on the Upper East Side by the river.

Gabe Kaplan based the show on his real experiences growing up in Bensonhurst. The Sweathogs' James Buchanan High is New Utrecht High in our world.

MosheFeder 16 months ago
Whatever they said on the show, the correct address for the Lane House on the Patty Duke Show was 6 Remsen, not 8. That's because the latter really exists, but it’s an apartment building, not a townhouse. There is no #6 in real life because the street begins at #8. If the address and house really existed, the building would have to be cantilevered over the Brooklyn Queens Expressway and would have an unsurpassed skyline view.
Like Reply Delete