Which era had the best pop culture? Measure up the films, music and television of the three dates in Marty McFly's time travels. 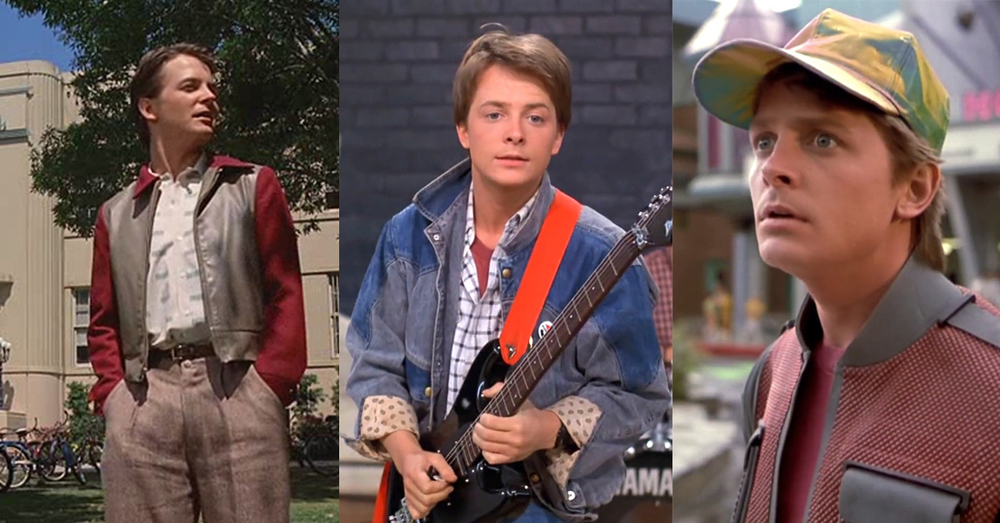 Today is Back to the Future day. Why? Well, in Back to the Future II, Marty McFly travels to October 21, 2015. While some of director Robert Zemeckis' predictions were spot on, such as cinemas filled with 3D sequels, the film was far from prophetic. For starters, the Cubs look down and out in their World Series bid. Hoverboards are hardly common toys. And thankfully we don't wear those goofy neon clothes.

The first two films in the franchise make thirty-year leaps, forward and backward, from October 26, 1985. As we are modern nostalgists, it seems apt to ask the question: What era had the best pop culture? Lets dig into the charts.

Top singles: "Autumn Leaves" by Roger Williams and "Love Is a Many-Splendored Thing" by The Four Aces

While rock & roll was just getting started — thanks to Bill Haley & His Comets (and Marty McFly) — romantic ballads, piano instrumentals, doo-wop and mambo filled the airwaves.

At the box office: Guys and Dolls and Oklahoma!

Musicals ruled. The Sinatra-Brando collaboration, the smash story of gambler Nathan Detroit, had just hit theaters. As big as those above pop singles were, it's not hard to imagine more people humming "Lucky Be a Lady" that week.

In its fifth season, at the episode "Nursery School" specifically, I Love Lucy was undeniable huge. Yet a quiz show hosted by Hal March was the highest rated series of that season. On their tails were Ed Sullivan and Jack Benny. In Back to the Future, Marty and his mother's family watch The Honeymooners, which ranked at number 19 in the Nielsen charts that year.

Top singles: "Saving All My Love for You" by Whitney Houston and "Money for Nothing" by Dire Straits

Whitney cleaned up. The soul icon was the first female artist to score three number one singles off her debut album. MTV, still in its infancy, jumped to a new level thanks to the meta-video by Dire Straits, which featured Sting proclaiming, "I want my MTV!" With its primal CGI, "Money for Nothing" felt like the future.

At the box office: Commando and Jagged Edge

After Back to the Future ended a stunning eight-week run atop the box office, the studly action stars took over. Chuck Norris fought off Invasion U.S.A., Arnold rescued his daughter with the help of a tool shed in Commando, and Charles Bronson whipped out his Magnum in Death Wish III. Richard Gere's thriller had a weekend in the sun in the midst of that mayhem.

NBC's Thursday sitcom lineup began its long run of Must-See dominance. Marty McFly himself, Michael J. Fox charmed on the second place Family Ties, as the Keatons were right on the heels of the Huxtables. In the drama department, the riches of Dallas and the neon noir of Miami Vice made people stay in on Friday night. Meanwhile, more and more Americans were spending $11.95 per month on basic cable. Nostalgia for the past went beyond McFly's time travels, as Nick at Nite launched with a bevy of reruns.

Top singles: "The Hills" by The Weeknd and "Hotline Bling" by Drake

As mammoth as Taylor Swift has been over the last year, moody R&B is ruling the charts at the moment. Drake samples some classic lo-fi soul by Timmy Thomas for his "Hotline Bling" while Canadian crooner Abel Tesfaye follows up his song of the summer with a darker tune for the colder weather. These two songs are also the most streamed at the moment.

At the box office: Goosebumps and The Martian

With the discovery of water on Mars, the Red Planet is on our brains. Of course, many more people are watching a trailer featuring planets far, far away. As the Matt Damon movie looks to the near future, Tom Hanks is caught in a web of Cold War intrigue in Bridge of Spies. Zemeckis, on the other hand, is struggling to regain his clout with his visual marvel The Walk. Back to the Future IV, anyone?

On television: NCIS and The Big Bang Theory

Well, "on television" no longer means the same thing. We consume video on computers, phones, tablets, watches. And the options are unlimited, from the classic television on MeTV to on-demand streaming. Around 15 million people are tuning in for NCIS and its New Orleans spin-off, yet Netflix now has nearly 70 million subscribers and 30 million have watched the new Star Wars trailer on YouTube, where you can find all of the above. Football and reality competitions fill out the rest of the broadcast top ten.