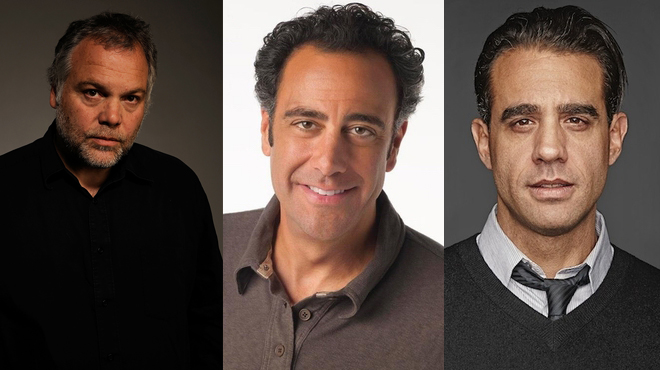 Last week, we posed the question: Who should play a modern Perry Mason? Robert Downey Jr. is mostly likely set to take on the character on the big screen, but you came up with some fantastic — and surprising — substitutes. Here's a recap of the most interesting suggestions.
Vincent D'Onofrio
The Law & Order: Criminal Intent star often plays on the other side of the law, from Kingpin in Marvel's Daredevil to Jurassic World. He can be imposing and serious with ease. He has the demeanor.
Brad Garrett
The comedic costar of Everyone Loves Raymond is a pick out of left field, but he really does have the look. We like thinking outside the box.
Bobby Cannavale
The Jersey born actor has been popping up a lot of late, in Woody Allen's Blue Jasmine, Ant-Man, and Boardwalk Empire, to name a few. Mason is a California lawyer (like his creator), and Cannavale is deeply East Coast. But we like the guy a lot.
Your other picks included:
Karl Urban
Henry Cavill
George Clooney
Jake Gyllenhaal
And, well, Ricky Gervais. Now that is outside the box.

MichaelSkaggs 1 month ago
Nothing makes me change the channel faster than seeing the name, "Vincent D'Onofrio".
Like Reply Delete

Toonhead 6 months ago
Good quiz. I went 14 for 14. Next?
Like Reply Delete