Where To Watch Shop Store Contact
Home / Stories / Pop flashback: These were the top hits this week in 1959
music1950s

Pop flashback: These were the top hits this week in 1959

Take a trip back to a golden age of harmony and heartache. And the Chipmunks. 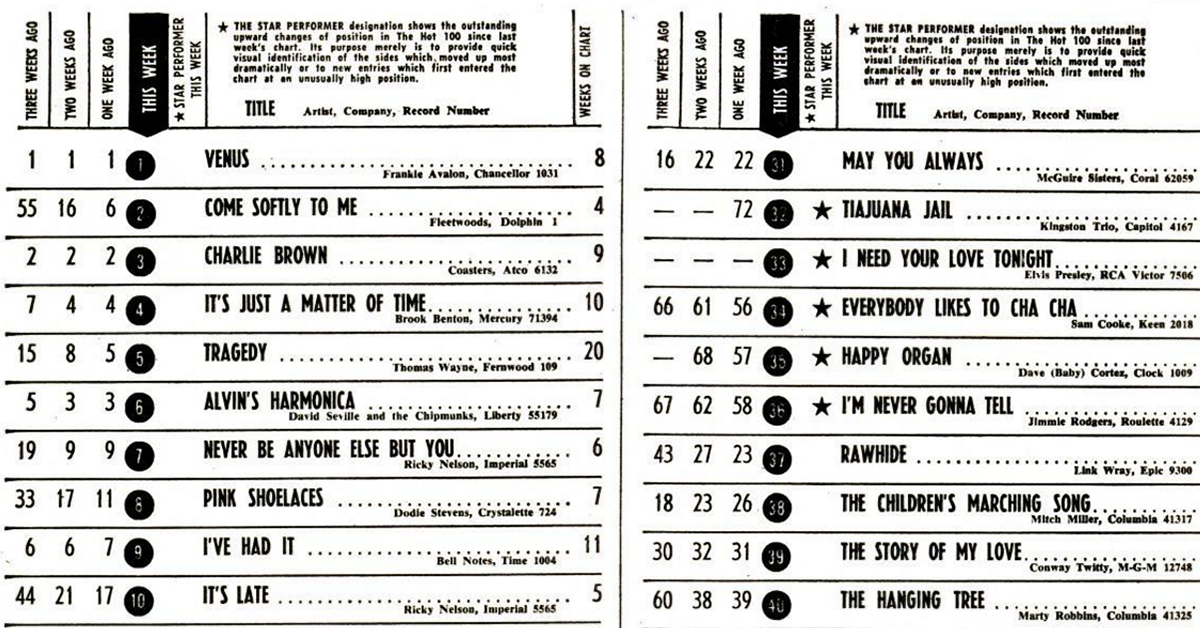 The spring of 1959 was an interesting time in pop history, seemingly a lull between earth shattering waves. Some still considered rock & roll a fading fad, dying off, literally, after Buddy Holly, Ritchie Valens and the Big Bopper perished in a plane crash weeks earlier. Elvis was serving in the Army, off in Germany, where a year later a group of Liverpool lads would arrive to hone their chops. 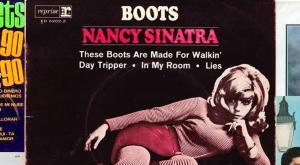 In that span between Bill Haley and the Beatles, the Billboard charts were flush with teen idols, doo wop, harmony groups and romantic ballads. The music was both melodic and symphonic, while remaining raw and immediate. Let's count down the top pop hits from the last week of March 1959.

The Adventures of Ozzie and Harriet hunk was peaking in fame at this point. His big screen breakthough Rio Bravo had just hit theaters.

The most rock & roll tune on this list was recorded for $50 by a bar band from the Bronx. In between the Bell Note's sets, a very young Steven Tyler and his Aerosmith cofounder Ray Tabano, whose father owned the bar, would jump on stage and cover the number.

The 13-year-old born Geraldine Ann Pasquale sold over a million copies of this cute toon with, honestly, rather questionable fashion advice.

7. Ricky Nelson "Never Be Anyone Else But You"

"I never will forget the way you kiss me"

Here he is again. Swoon.

"Will you put that thing down and sing"

Before they were cartoon icons, the the Chipmunks were created for a novelty song by Ross Bagdasarian, who provided all the voices with tape effects. This early hit won the Grammy Award for Best Engineered Recording, Non-Classical.

"Blown by wind / Kissed by the snow"

When comic book fans hear "Thomas Wayne" and "tragedy" they likely think the origin of Batman, but this one-hit-wonder came from the brother of Johnny Cash's guitarist.

4. Brook Benton "It's Just a Matter of Time"

"Why's everybody always pickin' on me?"

Believe it or not, songwriting all-stars Jerry Leiber and Mike Stoller purportedly did not pen this song in reference to the Peanuts character. In an episode of The White Shadow, the basketball team sings this ditty.

2. The Fleetwoods "Come Softly to Me"

The boy-girl-girl trio from Washington had no relation to Fleetwood Mac, though both acts did write breezy pop gems.

"Venus, make her fair / A lovely girl with sunlight in her hair"

This monster love song stayed at the top of the charts for five weeks. The Philly heartthrob scored another smash that year with "Why," the final number one song of the decade.