Check out the cast of Star Wars before they were stars 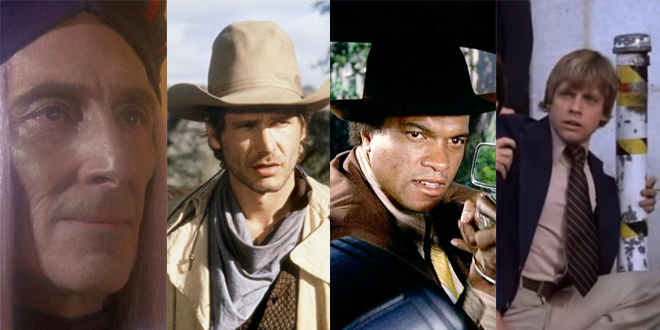 On Force Friday — the pop culture holiday for all things Star Wars — much of focus is looking forward. There are new Star Wars movies on the horizon like multiple suns. This being MeTV, we like to look backwards, back to the original Star Wars films… and beyond.

Before the sci-fi phenomenon made them household names, the cast of Star Wars was largely unknown. The only stars, per se, were veteran British actors. Alec Guinness was a legend for his work on The Bridge on the River Kwai, as well as his role as John le Carré's George Smiley, just to name a couple. Peter Cushing, who played the delectably sinister Tarkin, was more of a cult figure. He cut his teeth (so to speak) in countless vampire and horror productions. On the other hand, Star Wars players like Carrie Fisher and Anthony Daniels had hardly set foot in front of a camera.

Yet much of the original Star Wars trilogy cast had been chipping away in Hollywood for years, largely in small television roles. Before they were Luke Skywalker, Han Solo and Lando Calrissian, our Rebel heroes were cowboys, criminals and restless youths on notable TV series. Here are the highlights of their pre-1977 work. As many of these shows appear on MeTV, keep your eyes peeled!

Though it's a brief role, Hamill pops up in an eerie episode of Rod Serling's serial.
Jeannie, 1973
After hanging up his Jedi robes (and before donning them again!) Hamill did a stunning amount of cartoon voice work. He's been everything from Spider-Man villain to Pooh character. In 1973, he landed his first regular work as a voice actor with Jeannie, Hanna-Barbera's loose animated spin-off of I Dream of Jeannie.
The Texas Wheelers, 1974–75
Hamill co-starred alongside Gary Busey in this sitcom from MTM Productions, the company's follow-up to The Mary Tyler Moore Show and The Bob Newhart Show. It flopped. Read about it here.
The Streets of San Francisco "Poisoned Snow" and "Innocent No More," 1975, 1977
Born in Oakland, Hamill returned to the Bay Area twice for this classic cop show. In his second appearance, he plays a member of a juvenile gang.
"The City", 1977
Showing off his range, Hamill played a demented stalker obsessed with a country singer in this TV movie featuring Don Johnson and Robert Forster as the cops. This is a far cry from Luke (but remember, he did end up voicing the Joker):
Eight Is Enough, "Never Try Eating Nectarines Since Juice May Dispense," 1977
Here is the answer to a tough trivia question: Who was the eldest child on Eight Is Enough? Yep, just months before Star Wars hit theaters, Hamill appeared as David Bradford, the first of Eight's eight kids. He is only in the first of 112 episodes, however, as he immediately moves out of the house.

The Virginian "The Modoc Kid" and "A Bad Place to Die," 1967
It's no wonder Ford slipped into the roles of space cowboy Han Solo and whip-cracker Indiana Jones with ease — he honed his chops in a fistful of westerns. He briefly blew through the screen like tumbleweed twice on this, the third longest running western in TV history.
The Mod Squad "The Teeth of the Barracuda," 1968
Setting aside the chaps for moment, Ford took an uncredited role as a beach cop in the series debut of The Mod Squad.
Gunsmoke "The Sodbusters" and "Whelan's Men," 1972-73
These fantastic bit roles are practically dry runs for Jones and Solo. Just look at him above. Set up a Remind Me to catch these cameos the next time they air on MeTV.

The F.B.I. "The Architect," "The Sanctuary" and "Eye of the Storm," 1969–70
Now here is another fantastic trivia challenge: What television show featured Luke, Han and Lando at some point? Bingo! It's this one, the ABC series that lasted for a decade. Sadly, they never appeared together. Ford would appear in the same year as Williams, 1969. Hamill came by in 1972.
The Mod Squad "The Medicine Men," 1971
Alas, another missed opportunity to get Han and Lando together.
Mission: Impossible "The Miracle," 1971
Williams plays a smuggler — foreshadowing his antihero role in Empire Strikes Back — partnered with Jon Don Baker.

As we mentioned above, Cushing's credits run deep. Aside from his run as Sherlock Holmes, the refined actor largely appeared in horror films. But we had to mention this first step into 1970 space adventure. Cushing played Raan on the sci-fi epic, an evolved human who captured Martin Landau's soul.