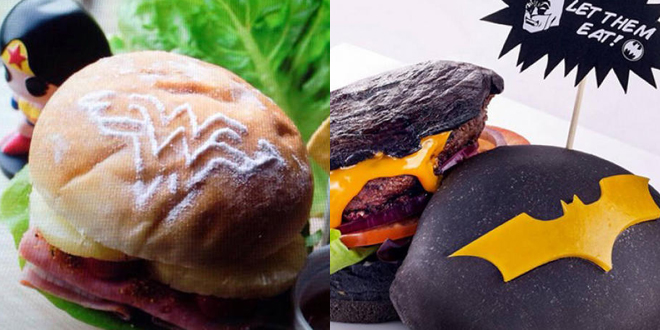 Pretend the Lasso of Truth is around you: Would you eat a Batman hamburger on a black bun with a cheese Batarang on top? Do you want that more than anything? Good news, you can eat an entire meal based on DC Comics heroes. The only catch is you have to go to the Malay Peninsula.

The DC Comics Superhero Cafes are a venture of JT Network (as reported by Fast Company), a retail firm that sells comic book clothing. After two locations in Malaysia, a third location is opening in Singapore. On the menu at the eateries is the perfect supper for MeTV's Sci-Fi Saturdays — a Superman Man of Steel BBQ Chicken Burrito, a Wonder Woman Turkey Roll, and a Dark Knight Wagyu Beef Burger. There are also lattes with the Superman logo and Bat-waffles. See more images at Fast Company's Co.Create blog.
We'd stick with those options over Aquaman's Justice Jumbo Prawn Cocktail, and not just because we broadcast Wonder Woman, Batman and The Adventures of Superman. No, it just seems weird that Aquaman would eat creatures that he talks to. We always pegged him as a seaweedatarian.
Catch Superman, Batman and Wonder Woman every Saturday from 6PM | 5C to 9PM | 8C on MeTV.