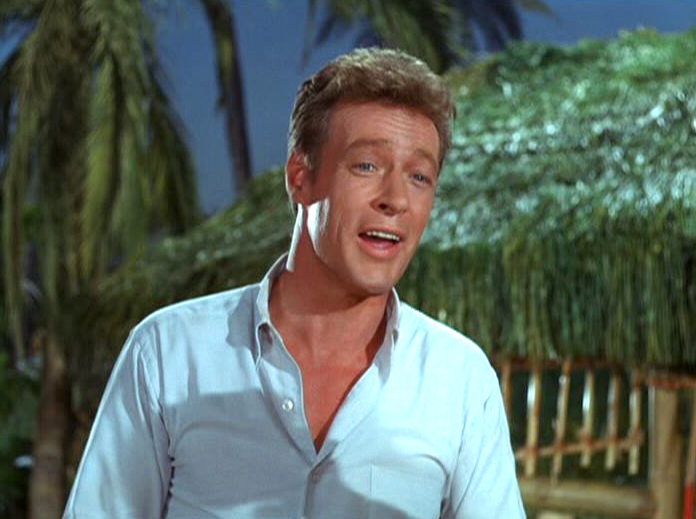 There’s sad news to report today, as we have learned of the death of Russell Johnson at age 89. The actor was of course known for his role as The Professor (real name Roy Hinkley) in the television classic Gilligan’s Island, as well as the various reunions and TV movies that followed. Johnson died of natural causes at his home in Washington this morning.
Johnson was born in the small town of Ashley, Pennsylvania and was a highly decorated second lieutenant in the Air Force who flew 44 combat missions in WWII. He was awarded with a Purple Heart when B-25 was shot down in the Philippines in 1945 and was honorably discharged as a first lieutenant later that year.
The GI Bill helped Johnson to enroll in acting school and by the early ‘50s he was working steadily in TV and films, often as a heavy. He starred alongside The Big Valley’s Peter Breck in a short-lived (1959-1960) western, Black Saddle, as Marshal Gib Scott. He logged a pair of Twilight Zone appearances, including one in which he played a professor.
It was 1964’s Gilligan’s Island that brought him into millions of households and gave him the role for which he’d be remembered and loved a half a century later. It came as quite a surprise to Johnson (and the rest) to discover that the show was an immediate smash.
And here’s Johnson from the same interview talking about the great on- and off-screen chemistry that the cast of Gilligan’s Island enjoyed.
Initially frustrated by years of being typecast as The Professor after the show ended in 1967, he eventually relented and welcomed the legacy of the show and the character that provided so much entertainment throughout the decades. During his later years, Johnson lived in semi-retirement, saying “Old actors never die, they don’t even fade away. They’re always available.” He devoted much of his time to AIDS fundraising after his son David’s death from AIDS-related symptoms in 1994.
Our most sincere condolences got out to the family and friends of Russell Johnson.