Honorary Marine Jim Nabors was not the first character to say Semper Fi on TV, but he certainly meant a lot to those in the service. 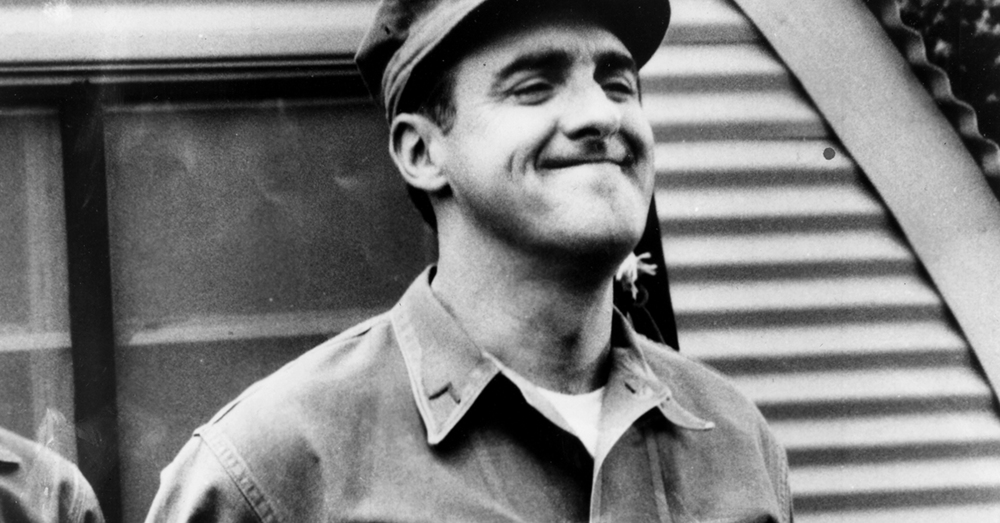 In the season four finale of The Andy Griffith Show, Gomer, the gentle gas station worker of Mayberry, is recruited by the U.S. Marine Corps. Andy points out to Gomer that the Marines are a very demanding outfit looking for fit, sharp, tough men. Good natured Gomer confesses that he might not seem like Marines material, but he assures Andy, "I'll meet them half-way."

Though the Jim Nabors character was played for laughs, the greatness and popularity of Gomer Pyle, U.S.M.C. was due to the fact that the series never treated the Corps as a joke. It was a patriotic and positive show that reinforced the values of service. In the turbulent 1960s, the very funny sitcom took its role quite seriously.

The Andy Griffith spin-off had it roots in Griffith's 1958 comedy No Time for Sergeants, in which he played a naive bumpkin who lands in the Air Force. The branch of the military might have changed, but the premise had not. In the intervening years between that film and the premiere of Gomer Pyle, the Navy and Marines had been featured in a handful of television programs. In 1958, The Men of Annapolis, the only show filmed at the U.S. Navy Academy, was still in syndication. The Blue Angels, which twice featured a young Burt Reynolds, ran from 1960 to 1961. Then, of course, came McHale's Navy, which ran for four seasons beginning in 1962.

A season before Gomer Pyle, Gene Roddenberry created The Lieutenant, an hour-long Marine Corps drama set at Camp Pendleton. The title character went by the name of Second Lieutenant William Tiberius Rice. Sound familiar? Roddenberry would later recycle the middle name for a certain Starfleet captain. That was not the only Star Trek connection. Leonard Nimoy, Walter Koenig and Nichelle Nichols all appeared on The Lieutenant. The latter notably starred in a controversial episode about race entitled "To Set It Right." The topic of prejudice was deemed too hot for television and the network refused to air the installment.

Gomer Pyle, U.S.M.C., which kicked off in the 1964–65 television season, was an immediate hit. The series landed in the top three in the ratings in four of its five seasons, and never fell out of the top ten. Its strength was its characters. Sergeant Carter, the stereotypically tough drill instructor, was wonderfully portrayed by Frank Sutton. Though Sutton helped define the trope of the shouting sergeant, he was a well-rounded character who clearly cared for Gomer. Carol Burnett briefly popped up as his female counterpart, Gunnery Sergeant Carol Barnes.

The upbeat portrayal of the Marines mattered to the U.S. Military. In 2001, Nabors was made an honorary member of the U.S.M.C., and Pyle was promoted from private to lance corporal. Six years later, the actor was bumped up to corporal with a ceremony in Hawaii due to his contributions to the public image of the Marines. Gomer Pyle paved the way for other Marines series such as Black Sheep Squadron and Major Dad.

On this 240th birthday of the U.S.M.C., take a moment to salute the supposedly silly Gomer Pyle. The 85-year-old actor meant a lot more to many service men and women.