Frank Gifford was the favorite football player of many Americans. The hard-nosed USC alum made the Pro Bowl at three different positions — on both offense and defense — which is incredible and will never happen again. After hanging up his cleats, the New York Giant hit the broadcasting booth, where he called the play-by-play action on Monday Night Football for 26 years.

But that was not Gifford's only onscreen work. While he was no Jim Brown when it came to his SAG card, Gifford appeared in movies and on television throughout his life. It began early.
In 1952, the year he jumped from college to the pros, the California native appeared as an uncredited football player in Bonzo Goes to College, the sequel to the hit Ronald Reagan chimp movie. Reagan was not in the sequel, but Gifford did get to meet the president eventually. 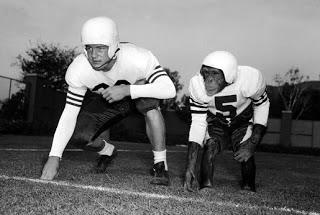 In 1959, Gifford scored a far more substantial role in the James Garner submarine thriller Up Periscope, as one of the crew members of the U.S.S. Barracuda.
In a 1963 episode of Hazel, "Hazel and the Halfback," Gifford appeared as himself when Hazel threw a trick bowling exhibition. Hazel draws up a Statue of Liberty play for Frank, but he notes, "It's nothing the Giants can use — it's not the T formation."
He twice appeared as a panelist on What's My Line, in 1956 and 1964. Watch the latter below.
He was on other game shows. He popped up on Dinah! and Webster. Perhaps his greatest guest role came on Coach, in "The Day I Met Frank Gifford," when Luther (Jerry Van Dyke) comes face to face with his idol at a banquet (pictured at the top).
His numerous sitcom and panelist appearances were testament to his popularity and likeability — and that is just naming a few above. He will be missed.
Do you have a favorite Frank Gifford memory or television moment? Share in the comments.