Where To Watch Shop Store Contact
Home / Stories / Beyond Disney, Dean Jones was a heck of a singer, too

Beyond Disney, Dean Jones was a heck of a singer, too 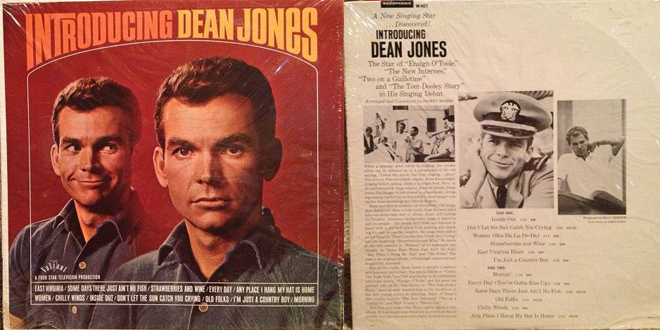 Disney characters are immortal. All of us, to some degree, grew up watching Disney television, Disney films. Holograms of Mickey and Donald and Ariel and Cinderella will entertain future kids in space stations. Which is why its so gutting when one of Disney's live action stars dies. That Darn Cat! was just a colorful as The AristoCats. Yesterday, when Dean Jones passed away, it was like learning that a favorite teacher or a distant family member or the Tramp had left us. Jones was Disney's leading man for much of the 1960s and 1970s. For people of a certain age, The Love Bug is part of their youth.

But the Alabama-born actor had a career that reached beyond the Technicolor dreams of Walt Disney. Jones, like so many other actors of that era, dabbled in singing. Perhaps that is not surprising for someone who starred alongside Elvis Presley (Jailhouse Rock) and Frank Sinatra (Never So Few) in the 1950s. Yet Jones's musical output was more akin to another Jones — the booming Welsh idol Tom Jones.
Dean Jones goes big with vibrato over a brassy beat on his first single, 1964's "Women (Ska-Da-La-Di-Da)." The tune comes from his debut, Introducing Dean Jones.
Sounds like the perfect song for a 1960s spy caper.
Before Disney, Jones starred on Broadway, and he would return to musical theater later in life. In 1968, he released a second album, the more somber Names of My Sorrow.
Jones' work beyond the House of Mouse included appearances on some MeTV shows — Bonanza in 1961 and The Love Boat in 1984. On Bonanza, he played an ex-con looking for redemption in season three's "The Friendship." Keep an eye out for it soon and set a reminder.