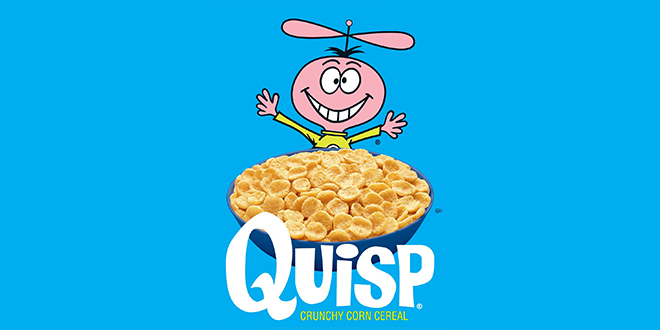 Saturday morning television and cereal go together like movies and popcorn. As a young kid, so many weekends would start bright and early, running to the TV set to catch Super Friends and other cartoons. You needed to make something easy to eat before your parents rolled out of bed. That's where cereal came in. Then, as a teenager, you would wake up after every else and need to make something for yourself. Cereal again, cartoons again.

Few cereals summon nostalgia for a certain generation quite like Quisp. By 1965, mascots like Tony the Tiger, Cap'n Crunch and the Trix Rabbit had been around for some time. Quaker Oats, which launched the Cap'n two years prior, took mascots and marketing to a new level with its launch of Quisp and Quake. The sweet corn Quisp tasted much like Cap'n Crunch, though it wreaked less havoc on the roof of your mouth. The cereal company again utilized animator Jay Ward, creator of Rocky & Bullwinkle and Dudley Do-Right, to design the mascots and handle advertising for the new products. For the commercials, Ward used notable voice talent, including Daws Butler (Yogi Bear) as Quisp and William Conrad of the Gunsmoke radio program for Quake. Check out the first commercial:

The space-themed Quisp beat Quake in a popularity contest staged by Quaker, but the cereal faded from shelves by the late 1970s. Yet the cereal endured as a cult favorite, an obscure pop reference for geek culture. Eventually, due to demand and nostalgia, Quisp returned as an "Internet cereal" in the new millennium, with its retro styling intact. It was the feel-young-again cereal of choice for gamers, cereal buffs and comic collectors. Today, you can find it in select stores.

Are you a fan of Quisp? What was your favorite breakfast cereal?