Pop flashback: These were the top hits this week in 1976

Forty years ago, America had a fever for boogie and TV theme songs. 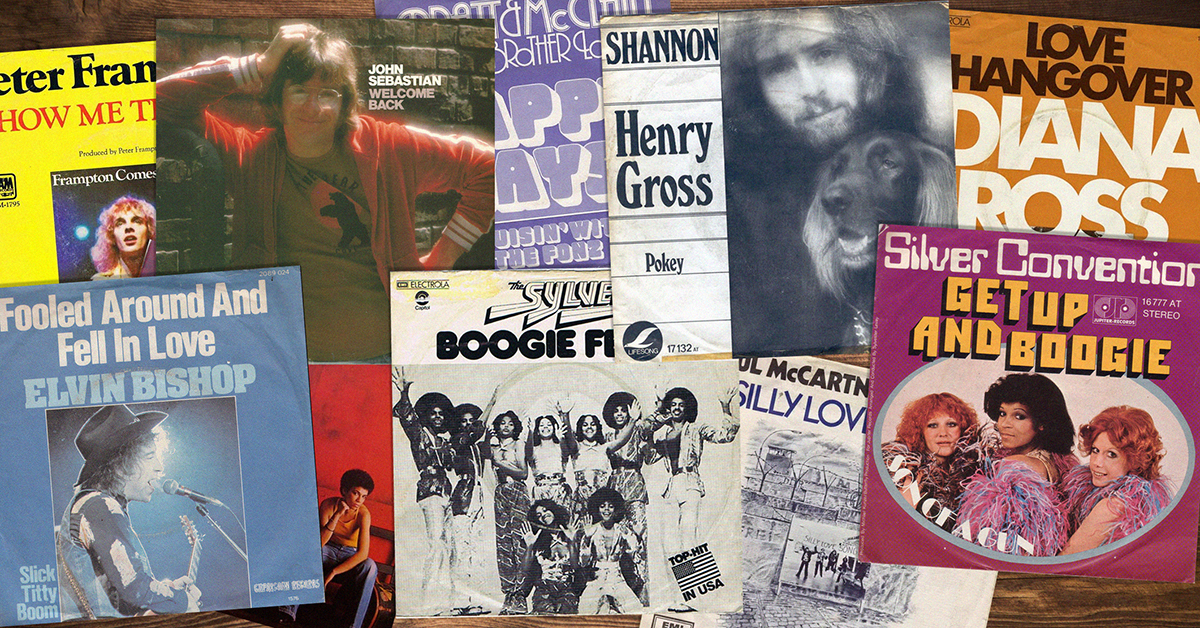 As the Bicentennial neared, Americans were singing silly love songs, paying tribute to deceased pets and doing a whole lot of boogying. Oh, and people couldn't get enough television on their televisions. Sitcom theme songs were chart-topping radio hits, too. Here are the Top 10 songs from the Billboard charts in mid-May, 1976.

"Shannon is gone / I hope she's drifting out to sea"

At the age of 18, Gross was the youngest performer to hit the stage at Woodstock, where he played guitar as part of Sha Na Na. Later, he would strike out solo and score a huge hit with the sad ballad "Shannon," an elegy to the dead Irish Setter of Beach Boy Dennis Wilson.

The theme to the sitcom Happy Days went through many mutations. It can be rather confusing. The series kicked off with Bill Haley singing his "Rock Around the Clock," but the retro rocker was replaced in season three with the familiar ditty written by Norman Gimbel and Charles Fox. The tune was recorded by Pratt & McClain, who used to go by the name Brother Love. However, the duo released the single as "Pratt & McClain with Brother Love." The theme peaked at No. 5 on the Billboard charts. In season 11, Bobby Arvon cut an updated version.

See Also: These were the top pop hits around the world 50 years ago
8. "Right Back Where We Started From" by Maxine Nightingale

"Love is good / Love can be strong"

This bouncy disco number is bound to put a smile on your face. How could you not love waves of sequins?

7. "Get Up And Boogie (That's Right)" by Silver Convention

West German disco trio Silver Convention spoke the international language of boogie. This monster dance hit certainly didn't offer any English beyond the six words in its title, spoken repeatedly over slap bass and strings. A year later, the group would play its first U.S. concert at an airport hanger for Braniff Airlines.

6. "Show Me the Way" by Peter Frampton

It still boggles the mind that Peter Frampton sold so many millions of his live album Frampton Comes Alive!, a staple of mid-'70s rock radio. This talk-box-heavy jam was everywhere, but have you ever paid close attention to the lyrics? They're kind of creepy.

See Also: Pop Flashback: These were the top ten hits this week in 1971
5. "Love Hangover" by Diana Ross

4. "Fooled Around and Fell in Love" by Elvin Bishop

Let's give some love to Mickey Thomas, the soon-to-be Jefferson Starship singer who crooned this smash. Blues guitarist Elvin Bishop gets the credit, though his backup man handled the lead on "Fooled Around." Recently, the song again became a mix-tape must thanks to its inclusion in Guardians of the Galaxy.

We're pretty sure Paul McCartney shows up on just about every one of these lists — with good reason. His busy bass line and those punchy horns make this admittedly silly love song undeniably infectious.

See Also: Pop flashback: These were the top hits this week in 1959
2. "Welcome Back" by John Sebastian

"Your dreams were your ticket out"

The erstwhile Lovin' Spoonful singer gave Welcome Back, Kotter one of history's greatest sitcom themes. Sebastian's tune was so perfect, the show, originally called Kotter, changed its title to reference the song.

1. "Boogie Fever" by the Sylvers

Aspirin could not cure boogie fever. Only the year 1980 could put an end to America's disco symptoms. This family act, a sort of answer to the Jacksons from L.A., gave this song surprising grit with fuzz guitar.