Zoinks! 10 of the spookiest episodes of 'Scooby-Doo, Where Are You!' 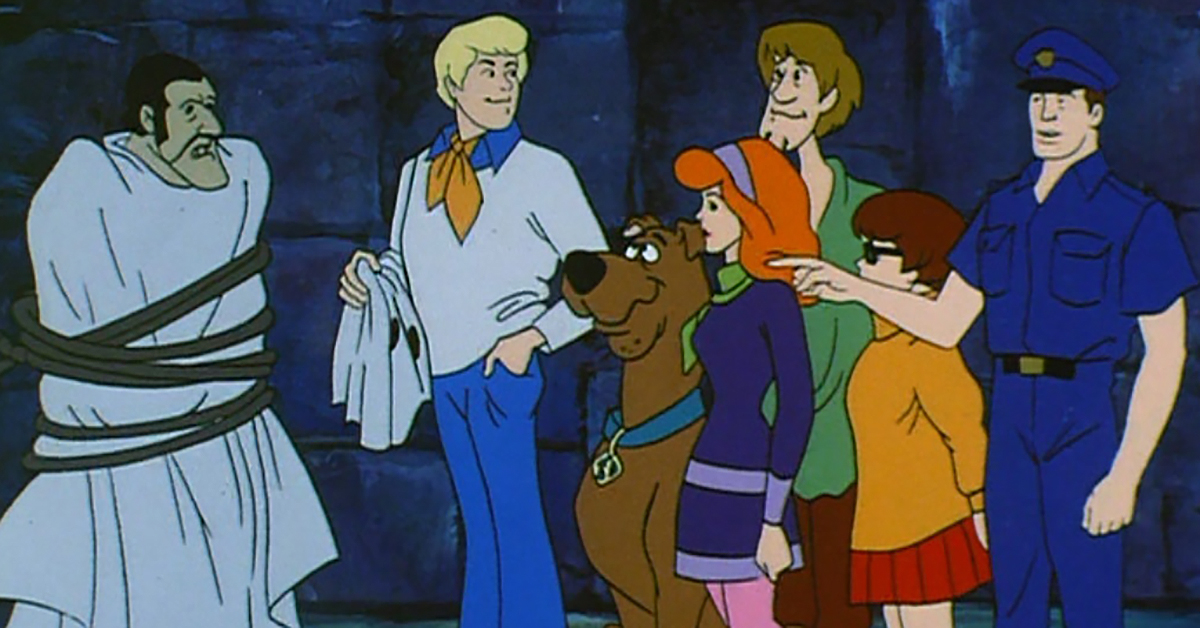 The world was introduced to Scooy-Doo and the Mystery, Inc. gang on September 13, 1969. The show was the result of CBS and Hanna-Barbera's plan to create a non-violent Saturday morning program. Though it's mostly a lighthearted romp — full of free-spirited late '60s/early '70s music, dancing, styles and lingo — some of the Monster of the Week ghouls truly scared the jinkies out of us as kids! Here's our pick for the show's scariest spooks. Did any of them keep you up at night?

Oh, you know, just a big blue skeleton space alien with glowing yellow footprints. This spook also has a shrill laugh, psychedelic space sounds that seem to follow him and a flashing red light that illuminates his helmet for maximum scares. He’s easily the most dreadful villain in the series and, unlike some of the others on this list, one that totally holds up today.

With that deep, creepy laugh and ghoulish green skin, the jewel-thieving Ghost of Mr. Hyde has stayed with us since he first popped up in this 1970 episode. A play on the classic tale of Dr. Jekyll and Mr. Hyde, the resolution of this mystery isn’t so scary (the ghost is actually an assumed identity of Jekyll’s sad, failed scientist), but Hyde’s lurking presence and low grunts are still nightmare fodder.

3. "Mine Your Own Business"

When the Scooby Gang gets lost in the desert, they end up in a spooky ghost town called Gold City and stay in an inn haunted by the menacing Miner Forty-Niner. Though not as outright horrific as some other classic Scooby spooks, its the Miner’s ordinariness and spontaneity (showing up in mirrors or the dead-end doorways of the mine) that make him terrifying in a more palpable way.

This was only the second ever episode of Scooby-Doo, Where Are You! and it was already bringing the everlasting frights. The spook in this episode — a glowing neon scuba diver known as the Ghost of Captain Cutler — is just part of the eeriness. The misty beach location, the creepy townspeople and deep blue hues create the an overall feeling of inescapable dread.

A creepy clown is one of the easiest ways to frighten children, so it’s no wonder this guy still haunts our psyche. Add to that hypnosis, circus tents full of strange contraptions and a vicious lion, and this one's a real horror show!

Much like Mr. Hyde, the Creeper is a big, creepy, hulking, green guy who grunts and moans and casts shadows. And like all the best Scooby villains, he gets a chase montage set to a dreamy Austin Roberts song. “Daydreamin (The Ostrich Song)” also has some pretty wild lyrics. The episode is overall fairly light — even by Scooby-Doo standards — but the look of the Creeper is scary enough to keep it on this list.

7. "A Gaggle of Galloping Ghosts"

This season one episode has a menagerie of creeps: Dracula, Frankenstein’s monster and a werewolf make appearances when the Scooby Gang visits Franken Castle. But it’s the fortune teller Carlotta the Gypsy who really scares the pants off us and ends up being the episode’s big bad (and a man!). “Her” croaky voice, grey skin and orange eyes still send a shiver down the spine.

This one is a classic haunted house story that’s made scarier not by a monster but by an affliction: The gang meets a man named Uncle Stuart who has been transformed into an old man. As if sudden aging isn’t horrifying enough, the episode also has an ugly blue ghost named Elias Kingston, a family curse and a spooky mansion with mausoleums in the backyard.

A spooky theme park is the setting for both this episode and the live-action Scooby-Doo movie that came out in 2002. It’s easy to see why: After dark, a theme park is basically a ghost town, full of deep shadows and monolithic rides made eerier by the absence of people. The scary dude in Funland is a robot-like man named Charlie who walks really fast, doesn’t speak and looks like a demented toy soldier. Charlie is one of the few Scooby villains who isn’t a man in disguise — he’s an actual robot (but one manipulated by his creators). In the end he’s reprogrammed to be a good guy, but that cold, blank stare from earlier in the episode still haunts.

Another haunted house story. This one has not only a spooky old mansion but also a headless specter roaming its halls. It’s a classic ghost story: The Gang, low on gas, take a shortcut to town despite warnings from a stranger that it will lead to danger. They end up stranded in a decrepit house full of floating candles, morphing paintings and hidden passages. Oh, and that guy without a head. Headless ghosts are always scarier that ghosts with heads, right?

VaughnBaskin 18 days ago
I Hope that Scooby-Doo, Where Are You! and The Yogi Bear Show will join MeTV soon!
Like Reply Delete

robertgeise 3 months ago
Um... "Scooby-Doo and a Mummy, Too"–hello??
Like Reply Delete

RedjacArbez 3 months ago
Glad I have this on DVD......
Like Reply Delete