Who would you rather complete your tic-tac-toe? Paul Lynde or Charo? 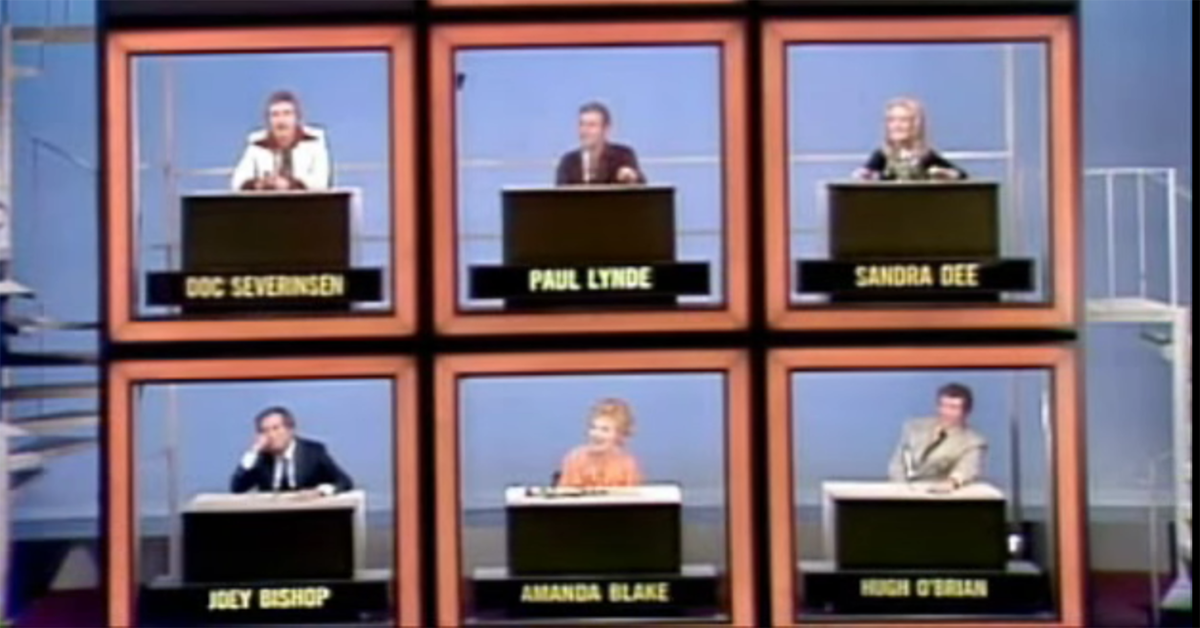 Ah, the Seventies. The golden era of the game show. These half hours of television were not monetary prizes so much as jokes. Riddled with double entendres and one-liners, game shows were showcases for witty celebrity guests, not the contestants. The talented panel on a given Match Game panel could dish out more laughs than an average evening of sitcoms.

No game show was funnier than Hollywood Squares. Host Peter Marshall played the straight man, setting up comedians with juicy trivia and true-false questions begging for a joke. Typically, the center square is reserved for the all-star, the one who can toss off brilliant quips without a thought. Yet in that glorious decade, every square of that tic-tac-toe board was an ace in the hole.

If we could go back in time and play, here is who we would pick, regardless of game strategy. Dozens upon dozens of celebs turned up on Hollywood Squares — everyone from Doc Severinsen to Jonathan Winters — so we stuck with the regulars who logged more than 40 episodes.

Who would you pick? 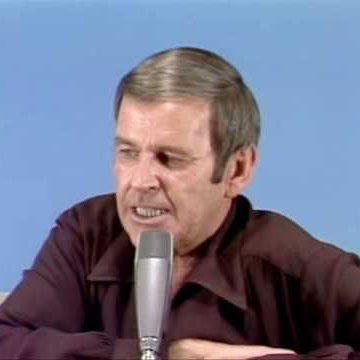 There is only one Paul Lynde. Had there been nine of him, Hollywood Squares would have been the greatest television comedy. Then again, it might have driven the censors mad and never aired. The campy former Bewitched regular was locked into center square for most the decade, knocking each set-up out of the park with a wink and a double entendre. Okay, they were single entendres.

A typical exchange:
Marshall: A friend offers to give you a French 75. What is it?
Lynde: Just a minute, that's 25 more than it was the last time. 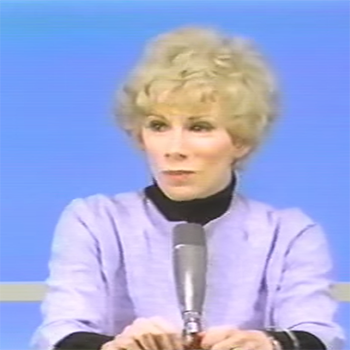 The queen of the one-liner, Rivers' dished out the often risqué domestic humor of her early stand-up. Back then, her material was less insult, more bedroom, but nobody was quicker.

A typical exchange:
Marshall: Time Life Books calls it the most complex lump of matter known to man. What is it?
Rivers: My eggs benedict! 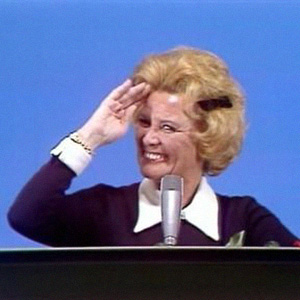 The Dick Van Dyke and Doris Day Show veteran played up her persona of a man-hungry and desperate cougar. She often playfully chided Marshall for serving her questions about old people. 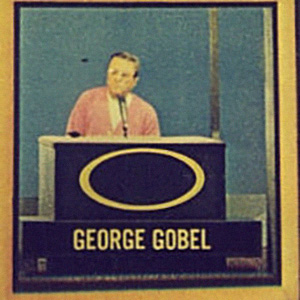 Having been on television practically since the start of the medium, Gobel was genius playing the randy old man. Constantly self-deprecating about his age, the '50s television star could hang with any new kid on the tower of blocks.

A typical exchange:
Marshall: Back in the old days, when Great Grandpa put horseradish on his head, what was he trying to do?
Gobel: Get it in his mouth.

The horror icon played against type with heaping doses of dry humor.

A typical exchange:
Marshall: In what event are you most likely to be confronted by a dog leg
Price: Oh, sleeping under a tree every time. 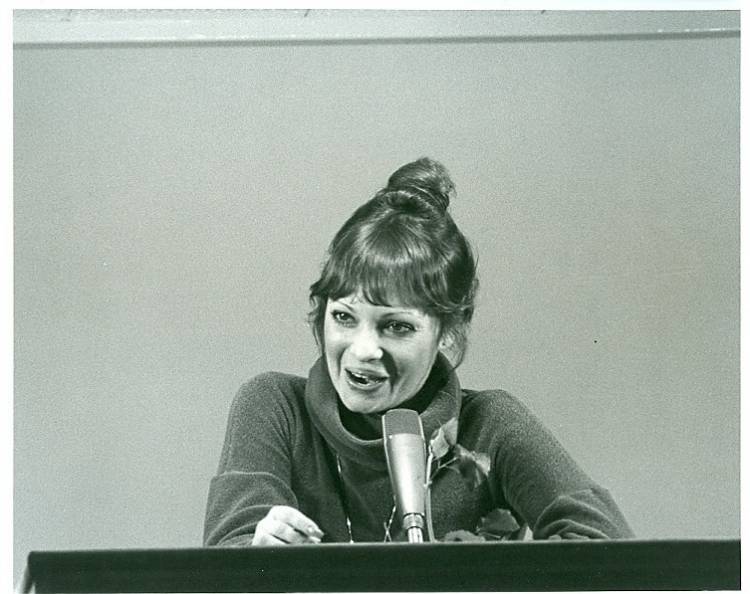 Turned a star by playing a schoolteacher on Room 222, Valentine built fantastic chemistry with Lynde, improvising banter that could best most writing rooms.

A typical exchange:
Marshall: True or false, having a good memory is a sign of a well-adjusted personality.
Valentine: What was the question? 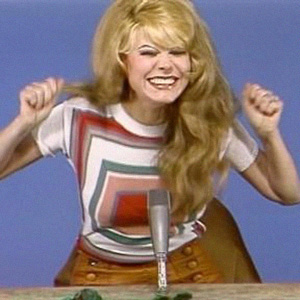 Cuchi cuchi! The Sofie Vergara of her time (or is that the other way around?), the Spanish bombshell was sharper than she acted. Her bon mots were funnier for being all the more unexpected.

A typical exchange:
Marshall: According to the Bible, they never get old, and not one of them has been known to get sick. Who are they?
Charo: The Osmonds. 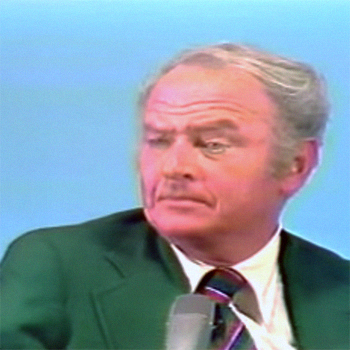 For a practiced improviser like Korman, Squares was a breeze. The Carol Burnett star made suggestive cocktail party repartee look easy. It was for him. It's not at all.

A typical exchange:
Marshall: In 1976, who made headlines by saying "I can't type! I can't file! I can't even answer the phone!"?
Korman: Richard Nixon. 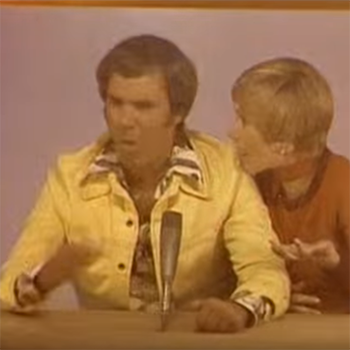 You never knew what… no, who you were going to get when picking the king of impersonators.

A typical exchange:
Marshall: According to the San Francisco Examiner, what land animal has the biggest eyes of all?
Little: [Impersonating Carol Channing] Oh, that's Carol Channing! 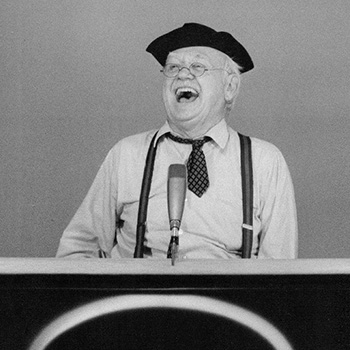 Cliff Arquette — grandfather to Patricia, Rosanna and David — developed this charming hillbilly character for Jack Paar's Tonight Show. Weaver, a sort of male counterpart to Mama Harper if you will, became so popular, Arquette was hardly seen without his crumpled hat again.

A typical exchange:
Marhall: How many balls would you expect to find on a Billiards table?
Weaver: How many guys are playing? 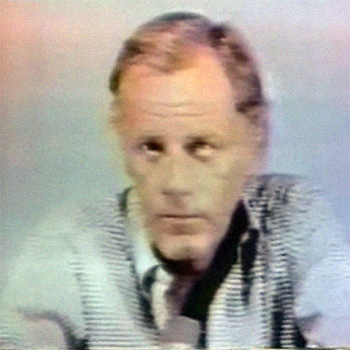 After leaving M*A*S*H, Stevenson struggled to recapture lightning on his own. While his sitcoms bombed, he found much comedic fruit on Squares, though one could detect a trace of dissatisfied bitterness in his brainier comebacks.

A typical exchange:
Marshall: True or false. Listen carefully. In 1912, the King of DenMark married the Queen of Norway. Today, one of their children is the King of Sweden, another is a prince in Finland, and a third gives saxophone lessons in Philadelphia.
Stevenson: That sounds incredible and people can giggle and snicker if they will. But what's more unique about what you said is that at one time the King of Denmark was the Queen of Norway. 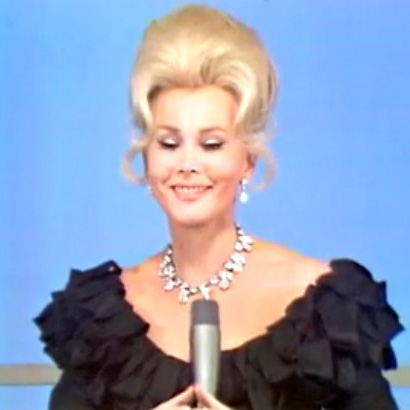 She may not have been the wittiest member of the board, but the Hungarian played up her role of an aloof rich woman with a fabulous accent. Let's be honest, people mostly picked her for her accent.

A typical exchange:
Host: Which of the following places consumes the most Cheez Whiz — California, Indiana or Puerto Rico.
Gabor: What is a cheese wheeze though? 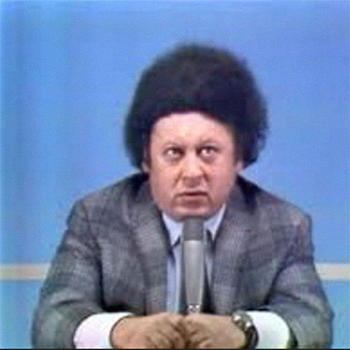 The stand-up appeared on a staggering number of Ed Sullivan Shows, and he still had that brand of Catskill comedy well honed in the 1970s.

A typical exchange:
Marshall: True or false, rubbing grapefruits on your body makes you sexy
Allen: Whose grapefruits? 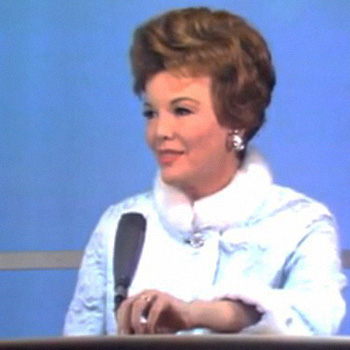 While best known for playing a sitcom mom on several series, Fabray played it fairly straight, but was a vaudeville vet who would hit your funny bone with an unexpected punchline. On Squares, she was like a fabulous elder aunt who would quietly bust up the room at a holiday gathering.

A typical exchange:
Marshall: What king signed the Magna Carta?
Fabray: Was it Thomas or Richard… No, Tom and Dick are the Smothers Brothers.

rgs_cdsrfun 8 months ago
Wally Cox was a true favorite of mine. He and Charley Weaver were the true draws for me as a kid. I still remember how sad I was watching the shows after Wally died.
Like Reply Delete

MMeans1 8 months ago
Sofia Vergara is definitely a Charo knock-off. Charo was and will always be one of a kind.
Like Reply Delete 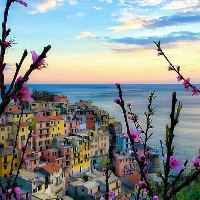 ElaineSoni 12 months ago
Where is Charles Nelson Reilly? He is should be there.
Like Reply Delete

TMJ 14 months ago
Two Me-TV starts were brilliant on "Hollywood Squares". They would give the most absurd answers, but do it such a serious manner that the contestants would fall for it virtually every time. They were Michael Landon and Robert Fuller. I think both really enjoyed being able to do comedy for a change.

srrainwater 14 months ago
Not going lie. I got to say Paul Lynde. I remember “Lee Marvin lost a part of his derrière in WWll” Paul Lynde “He lost the rest of it in that palimony suit”
Like (1) Reply Delete

EricFuller 14 months ago
There was a book and an album called "Zingers From The Hollywood Squares" from 1974 or '75. Since Marty Allen is listed I remember a question Peter askedabout dipping pretzels. He asked Marty (Pittsburgh native) what guys in Philadelphia dipped their pretzels in. Marty's reply was, "A girl from Jersey."
Like Reply Delete

Dario 14 months ago
Most of these celebs were terrific, but Paul Lynde was the best of them all. 😁😁😁😁😁
Like (1) Reply Delete

geatornez82 19 months ago
George Gobel had a great one I saw on a July 4, 1978 episode I saw on YouTube:
Q: What do slumped shoulders indicate?
A: My necktie is caught in my fly.

Dario geatornez82 14 months ago
He was terrific on that show. 😁
Like Reply Delete

RedSamRackham 25 months ago
* QUESTION: The Statue Of Liberty stands in New York Harbor. Where can a smaller version of the statue be found? * PAUL LYNDE: On the hood of Sammy Davis Junior's car! ☺
Like Reply Delete

JohnFinnJr 25 months ago
Well, I think you shortchanged Wally Cox. He was excellent.
Like Reply Delete

Margaret 28 months ago
My favorite Hollywood Squares star has always been, and always will be, Vincent Price. I have been a fan of his for many years since the 1970s, and I liked seeing him on the Hollywood Squares and loved his witty answers to the questions on the show. I wish that YouTube had more episodes of The Hollywood Squares featuring him, including the June 17, 1974 episode of the show.
Like Reply Delete