Where To Watch Shop Store Contact
Home / Stories / Save the date: 11 TV weddings we wish we could have attended
Nostalgia

Save the date: 11 TV weddings we wish we could have attended

We think our invites got lost in the mail... 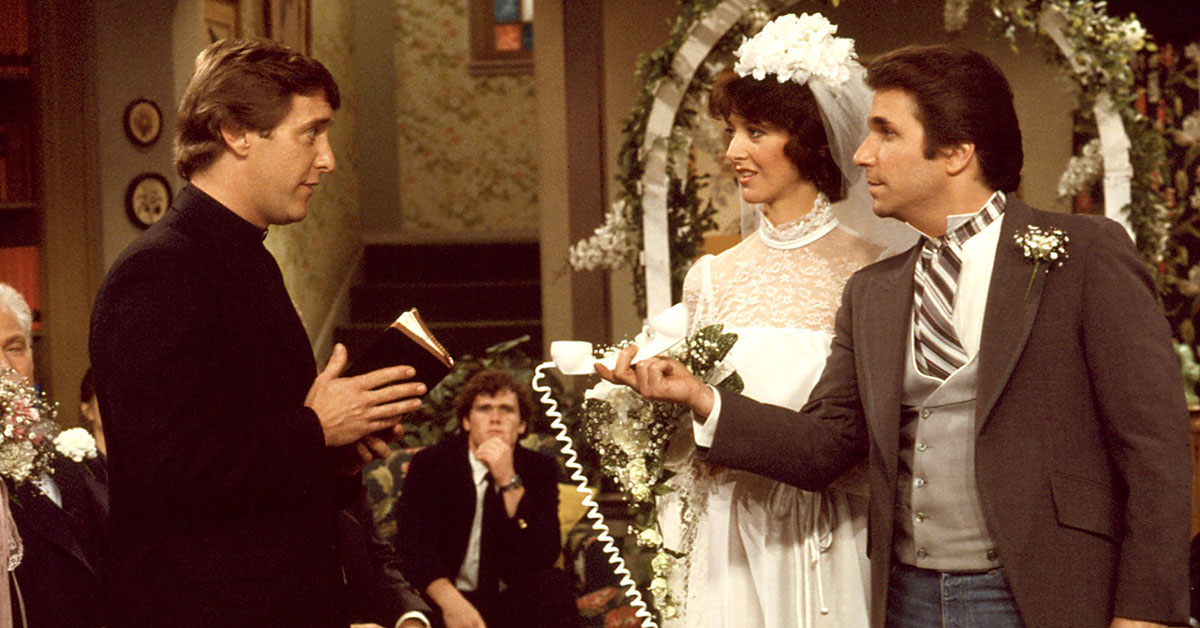 While most people plan out their special day months in advance, many of our favorite TV characters only gave us days, sometimes minutes, to prepare ourselves for what we were about to watch.

It's almost a rule of thumb that something has to go wrong with a TV wedding. Whether it's running though the subway like Rhoda or yelling at kids to behave like Mike and Carol, a TV wedding means there's also plenty of drama.

It's always fun to watch it all fall into place in the end. Let's take a walk down the aisle and revisit these 11 stressful-yet-romantic TV weddings. 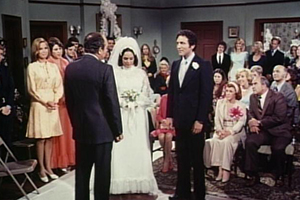 No wedding has captivated our attention quite like Rhoda Morgenstern's on Rhoda. All the tension building up to the main event, plus the reunion of the Mary Tyler Moore cast, meant this wedding was destined to be a hit.

At the time, the wedding was the highest rated television episode of the 1970s, and second only to the birth of Little Ricky on I Love Lucy. 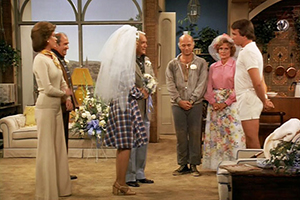 Audiences thought it was just another one of Mary Richard's dinner parties, but it turned out to be so much more in the season six episode "Ted's Wedding."

Ted and Georgette's wedding is a prime example for people who don't want to spend too much time planning everything out. The proposal, planning and ceremony took place in the span of a couple hours. Now that's how you get the job done. 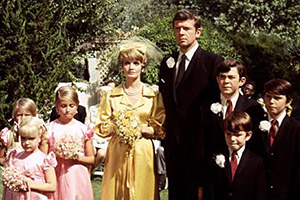 TV's greatest blended family came together in the first episode of The Brady Bunch with the wedding of Carol and Mike. It was a quaint ceremony, but it didn't come without a few hiccups.

The newly married couple had to learn fast how to co-parent by scolding their kids about their misbehaving pets. 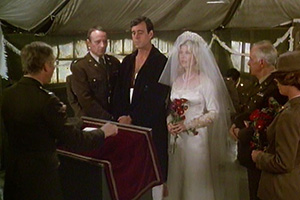 In true M*A*S*H fashion, this wedding involves an incredibly cruel (yet incredibly funny) practical joke. When Donald passes out drunk at his bachelor party, Hawkeye and B.J. put him in a full body cast and convince him that he broke his leg. This wedding serves as a cautionary tale to not get too wild the night before any big wedding. 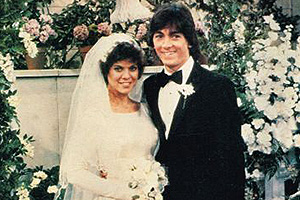 Ahh, young love. As Happy Days wound down in its 11th season, Joannie Cunningham walked down the aisle and said "I do" to her high school sweetheart Chachi Arcola. We knew their love was strong, especially because they stayed together after their failed attempt at forming a rock band in Chicago. 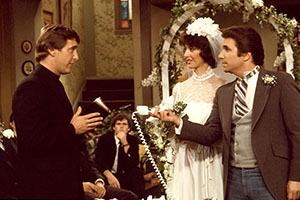 If Joannie and Chachi's wedding was the perfect ceremony for TV, Richie and Lori Beth's was the definition of getting hitched. In fact, Richie doesn't even attend his own ceremony because he's stationed overseas. Instead, he has Fonzie stand in as the groom and "marries" Lori Beth over the phone. How romantic! 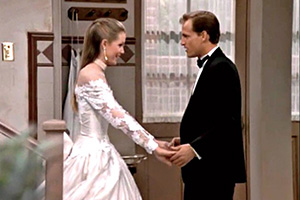 Cheers left the bar and headed to the altar with the episode "An Old-Fashioned Wedding" in season 10, but there's nothing old-fashioned about it. Nothing goes right when the gang prepares for the reception, and the Gaines family keeps a close eye on Woody to make sure he behaves himself. It's messy, it's a borderline disaster, but it's so fun to watch. 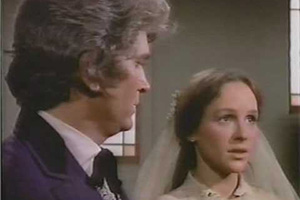 The vow "'til death do us part" was never more appropriate than the season 14 episode "Forever." After many, many girlfriends, Little Joe finally finds a woman to settle down with. But the honeymoon is cut short with a devastating, brutal twist at the end that left audiences reeling. Although the season 14 opener is a tragic wedding episode, it really forced us to appreciate what we have before it's gone. 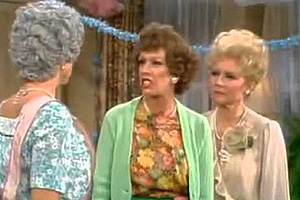 Mama's Family brought together some of the biggest comedic legends for the marriage of Vinton and Naomi in the show's first season. Carol Burnett, Vicki Lawrence, Betty White and Rue McClanahan join forces to ensure a stressful and hilarious wedding due to a family feud over a ring. It's fun to watch, but it certainly wouldn't be fun to be the bride or groom. 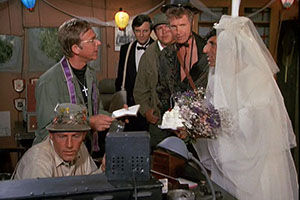 Klinger had the distinction of being married not once, but twice on M*A*S*H. The first time in season three, Klinger finds out his love back home is ready to get married. He (unsurprisingly) dons a wedding dress and gets married over the radio.

They end up getting divorced not long after, and Klinger eventually falls in love with Soon-Lee. In the series finale, the two are married by Father Mulcahy, and Klinger stays behind to help his bride find her family. 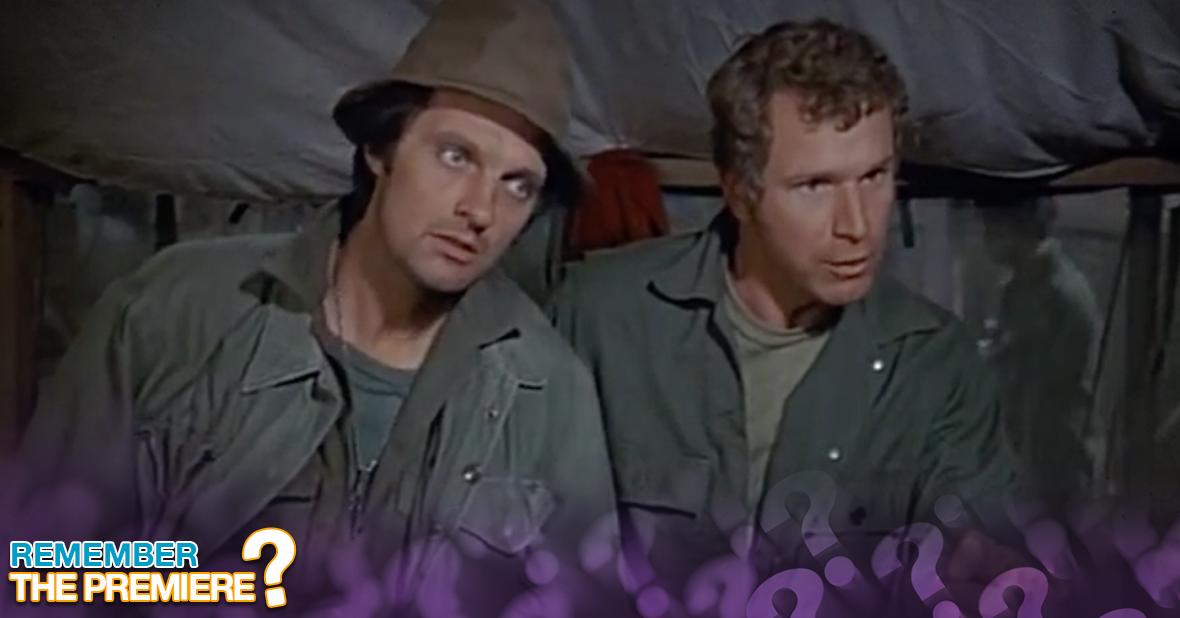 AnnaRentzVandenhazel 10 months ago
Richie Cunningham wasn't exactly "overseas", he was in Greenland, close to North America.
Like Reply Delete

Amalthea 13 months ago
I loved the double-wedding on "8 Is Enough" of David & Janet, and Susan & Merl. There was also Tom & Abby's little wedding, which was sweet.

CraigGustafson 13 months ago
What? No remarriage of Felix and Gloria Ungar?
Like (1) Reply Delete