When it's time to change, you've got to rearrange.

Everyone makes fun of Jan Brady for being the middle child on The Brady Bunch, but let's not forget Peter is in the same position. He constantly has to compete against his older brother — the football star also known as "Johnny Bravo" — for attention.

Luckily, Peter doesn't need to pull any stunts to get noticed. (We're looking at you, Jan.) At the end of the day, Peter is a stand-up guy who always looks out for others.

Here are seven standout episodes of The Brady Bunch that showcase just how essential Peter Brady is to the show.

Mike has delivered some sound advice over the course of the show's five seasons, but he teaches one of the most surprising lessons during this episode. When a bully gets into a fight with Peter, after the noble brother tries to stand up for Cindy, Mike teaches his middle child how to fight back.

Let's not forget Peter is involved in one of the most memorable quotes of the series: "She always says don't play ball in the house." It happens after Peter breaks Carol favorite vase on the eve of a big camping trip.

Although this episode has Marcia's name in the title, you can't forget about the important role Peter plays. While Marcia tries to prove a girl belongs in the Frontier Scouts, Peter joins the Sunflower Girls. Hilarity ensues.

This classic episode features everything that's great about the show. The kids work together to solve a problem, there's adolescent drama involved, and everyone sings! Pubescent Peter's voice starts cracking right as the siblings are supposed to record a song, leading to his memorably pitchy solo.

To his dismay, Peter gets the part of Benedict Arnold in the school play about the American Revolution. Carol tries to convince Peter it's an honor to receive such a rich part, but his friends start giving him a hard time for playing a traitor. 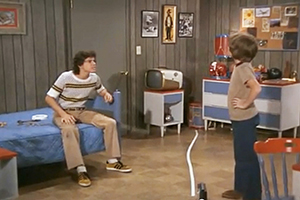 Peter is usually the one sticking up for himself and others, but the roles are reversed with this episode. When Bobby saves Peter from a falling ladder, Peter promises to be his younger brother's "slave for life." But of course, the agreement gets old after a couple of days, leading to the famous scene where the brothers tape a line across their bedroom. 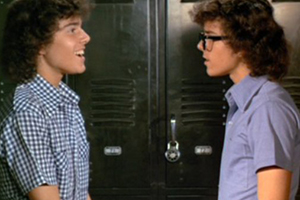 What's better than one Peter Brady? How about two?! Christopher Knight also plays foreign exchange student Arthur Owens in this episode. Peter enlists his doppelganger to pull a prank on his family, and true to form, things quickly get out of hand.

SEE ALSO: 7 MAJOR REASONS WE SHOULD ALL REMEMBER JAN BRADY

Sometimes, it's all about Jan, Jan, Jan! READ MORE

WixomTFrog 33 months ago
Peter "Sunflower Girl" Brady was smashing gender roles way back in the Nixon era. While your parents were protesting Vietnam, Pete was bravely selling cookies. #AheadOfHisTime
Like Reply Delete