You might want to check your attic to see if you still have some of these bubblegum cards based on Star Trek, Batman, Andy Griffith, Hogan's Heroes and more. 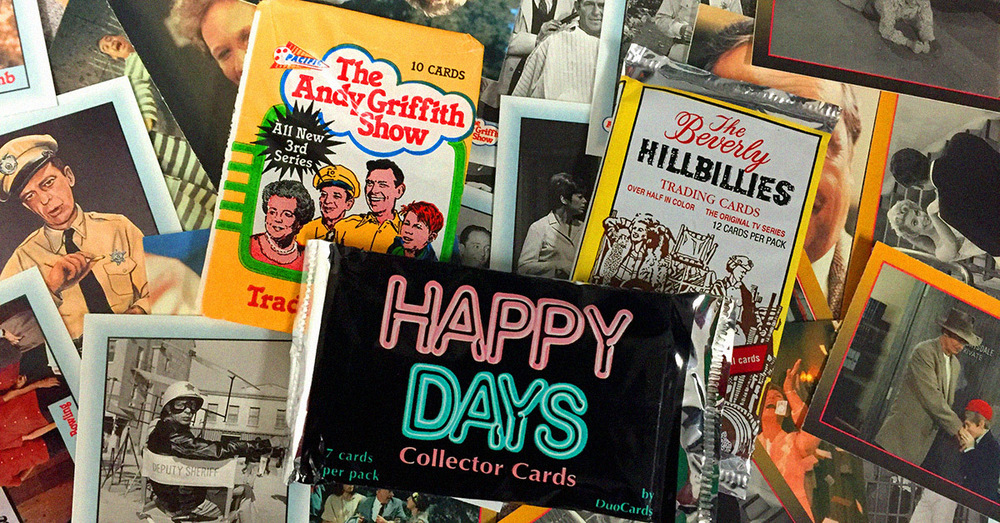 Kids used to stick baseball cards in the spokes of their bicycles to emulate the sound of a revving engine. But what if you wanted to pretend you were Batgirl atop her motorcycle, or Ponch and Jon patrolling the California highways? Thankfully, for authenticity's sake, there were trading cards based on Batman and CHiPs.

Well, wait. Hopefully, you did not let your Schwinn wheels chew up those cards — they can be worth a lot of money these days! Half a century ago, trading cards were a massive industry. While companies like Topps, Fleer and Donruss primarily produced images of athletes (and stiff pink sticks of gum) there were dozens of tie-ins to TV series. If a show was a hit with kids, odds are, there was a set of trading cards.

Here are some of our favorite sets that focus on the titles from the 1950s, '60s and '70s. Dig through your attics and storage spaces — or hit eBay. That's where we gathered most of these. Cardboardconnection.com is another great resource. 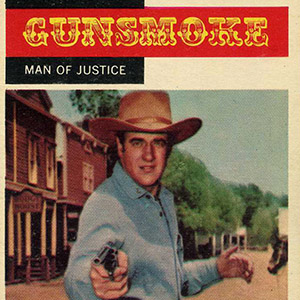 The vast popularity of small screen cowboys in the 1950s pioneered new forms of collectible merchandise. For example, westerns gave us the first tie-in lunch boxes. Topps branched out into the world of television with cards featuring tumbleweed-strewn stills from hits like Gunsmoke, Wagon Train, Have Gun, Will Travel and Wanted: Dead or Alive. There's a ton of star power packed into this set. 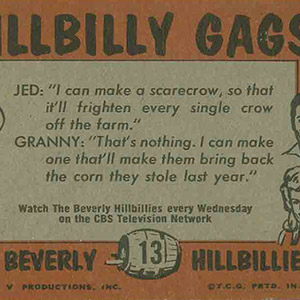 Colorized stills from the show made up the 66 card collection, unlike some sets below that offered monochrome images from color shows. The "Hillbilly Gags" on the back featured jokes from the show. Thirty years after the original collection, a glossy set was released by Eclipse to ride the tide of the movie remake. 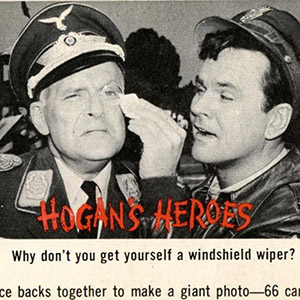 Red text sat atop black & white photos of Klink, Schultz, Hogan and gang in this tempting collection. Flipped over, the full 66-card set made one big image. Good luck completing it today! 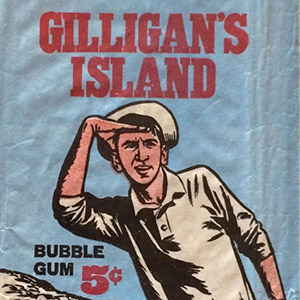 A mere waxed wrapped from this 1965 set can set you back about $150–$250 on eBay. Like the first season, these cards come in black & white, but with nifty comic-book-style speech bubbles. 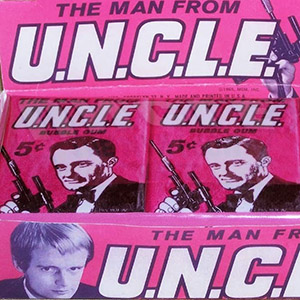 These pink-packaged rectangles were colorless as well, though the sister set for The Girl from U.N.C.L.E. came in color.

Image: Reflections on Film and Television 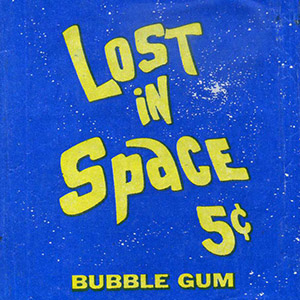 These straightforward cards match the more serious tone of the first season, in black & white. On the flip side, a cool ink illustration of the Robinson family, lit up in a pinkish red, framed a bit of text telling the story behind the scene. 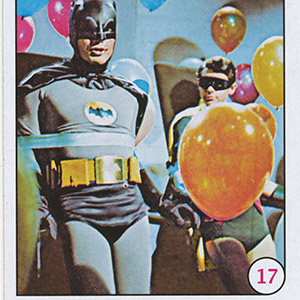 Just how popular was Batman? Topps produced five different sets for the Caped Crusader — in 1966 alone. Three featured illustrations by Norman Saunders, while two nabbed stills of Adam West and Burt Ward from the Batman movie. Just as the series spawned many imitators, the tie-in cards likely spurred others to follow suit. 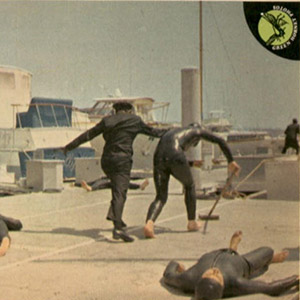 Thanks to the presence of Bruce Lee, these babies are highly collectible. With minimal artwork and text on the front, they are quite beautiful, too, with full and uncluttered screen grabs from the series. In 1966, Topps also produced a line of Green Hornet stickers, which featured more movie-poster-like designs. 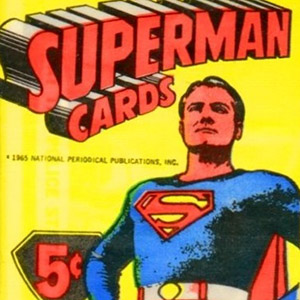 The original run of The Adventures of Superman ended in 1958, yet this set from '66 focuses on the George Reeves show. Both the wrapper and the card back proclaimed, "Watch Superman on T.V." Despite arriving in the color era, and though Adventure of Superman eventually went color, the cards are black & white. 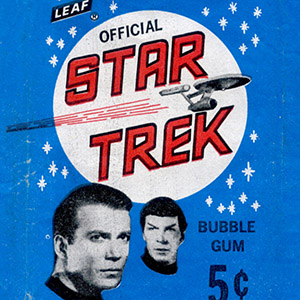 We dig the retro look on the wrapper of the original Leaf set, which almost seems 1940s or 1950s in style. Likewise, the cards are black & white. Seven years after the show was canceled, Topps fed Trekkie demand and supplied a full-color set. The original is much more rare and can fetch some astronomical prices. 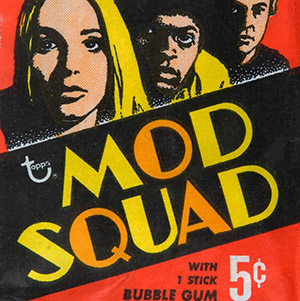 The basic set focused on individual characters and actors from the hip cop show. 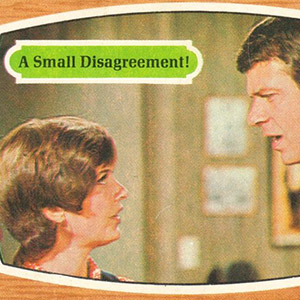 With its wood grain border, lime greens, and vintage tube television screen photo frame, this kitschy collection has a look that fits right into the Brady ranch. For something aimed at children, there was a surprising amount of Mike and Carol shots, including a cute pic of the duo sharing a milkshake. 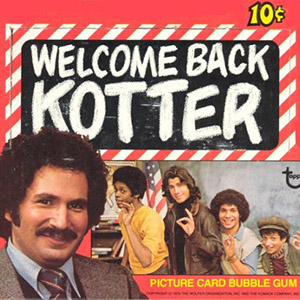 Barbarino, Washington, Horshack, Eptein and Kotter cracked jokes in cartoon speech bubble. The back featured chalkboard style quotes from the episodes under the banner "The Sweat-Hogs Speak." Obviously, they are worth the price for the fashion and hair. 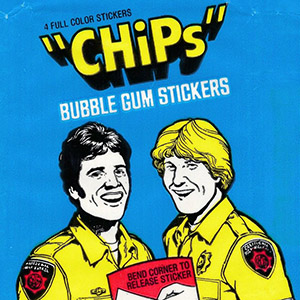 Technically a sticker set, we included these because the collection featured fun badges and action shots of Erik Estrada astride a jet ski. 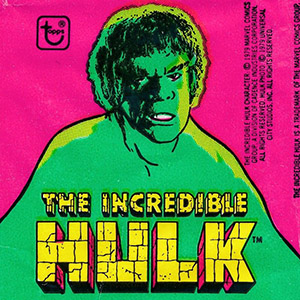 Naturally, these babies used up a lot of green ink. A jagged Hulk-hued border ran around the edge of the cards. The shots centered largely around the transformation of Bill Bixby into Lou Ferrigno. 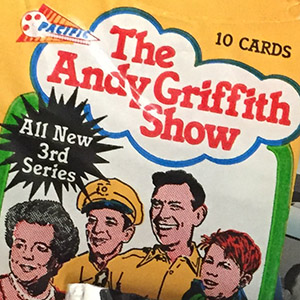 Better late than never! Pacific's collection is worth tracking down for its retro styling and behind the scenes photography. Our pack delivering paintings of Barney and comedic peeks of the actors hanging around the set. 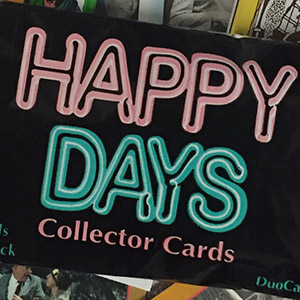 Glossier than the counter tops at Arnold's and thicker than jukebox glass, these deluxe cards feature a full bleed photo on the front, primarily head shots of individual characters, with trivia and episode checklists on the back.

idkwut2use 13 months ago
I especially want the Kotter ones. :3 And Happy Days.
Like Reply Delete

CarlaMoodyRogers 25 months ago
I have Charlie's Angel's and Super Friends.
Like Reply Delete

JamesBrashear 25 months ago
I remember Threes Company having trading cards.
Like Reply Delete

ndebrabant 25 months ago
I had Batman and the Green Hornet. Still have Hornet cards. I don't know what happened to Batman. Those type of cards were hard to fine at stores. Mostly baseball or football cards were around. Still, I loved to have all those listed.
Like Reply Delete