You will Nanu-Nanu-never believe this trivia about the classic Robin Williams sitcom. 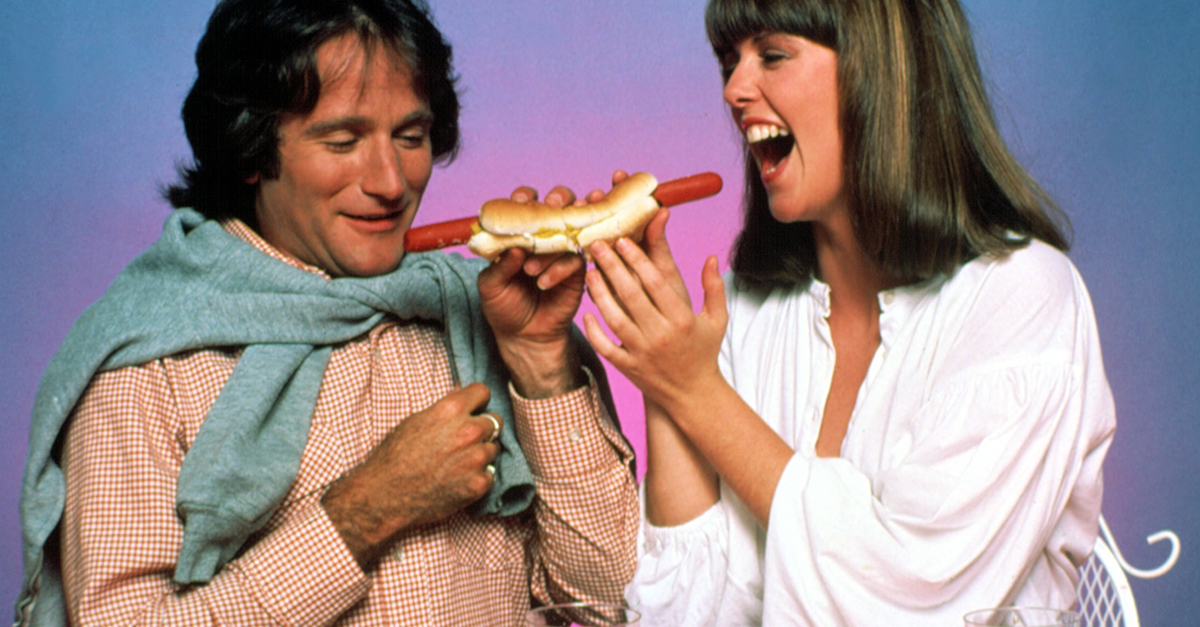 There will never be another comedian, performer and human being quite like Robin Williams. And therefore there will never be another sitcom quite like Mork & Mindy. On paper, it is a silly premise. An alien with a fondness for rainbow suspenders travels to earth in a giant egg and settles with a young woman in Boulder, Colorado. Without the madcap energy and unbridled creativity of Williams, it simply would not work.

We can thank producer Garry Marshall and Happy Days for giving Robin Williams his big break. Mork first appeared alongside the Fonz and Richie in the fifth season outing "My Favorite Orkan," 19 episodes after Fonzie jumped the shark. Months later, in the fall of 1978, the instantly popular Mork would get his own series.

Here are some things you might not know about Mork & Mindy. Nanu Nanu!

You can now stream select episodes of 'Mork & Mindy' for free on our website here.

1. Mork was inspired by 'Star Wars' and 'The Dick Van Dyke Show.'

After seeing Star Wars, Garry Marshall's son came to dad and asked, "Why can't there be an alien on Happy Days?" Good question! A similar scenario had happened on a sitcom in the 1960s. For inspiration, the Happy Days producers looked back to an episode of The Dick Van Dyke Show, "It May Look Like a Walnut," which featured Danny Thomas as an alien named Kolak. Rob Petrie dreams of Kolak, much like Richie dreams of Mork. 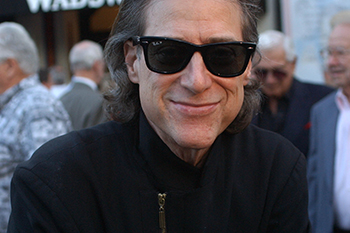 What would a neurotic Mork have been like? According to the book I'm Dying Up Here: Heartbreak and High Times in Stand-Up Comedy's Golden Era, Richard Lewis and Robin Williams found themselves in the same Paramount audition room for the guest spot in "My Favorite Orkan." The two budding comics were told to come up with alien voices. Lewis auditioned first, and could only think to do a Danish accent. He stopped in the middle of his session and said, "You know, Robin Williams is next. He is Mork, and if he doesn't get this, then you are all crazy." Lewis always was self-deprecating. Dom DeLuise and Roger Rees (Robin on Cheers) were reportedly also considered for the role. 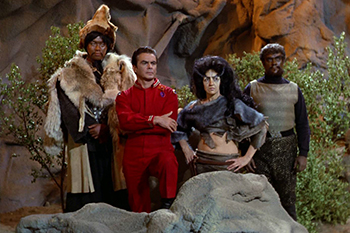 Mork's red jumpsuit was a recycled costume from Star Trek: The Original Series. The outfit, which clearly featured the distinctive silver ribbing on the collar and sleeves, was worn by Colonel Green in "The Savage Curtain," one of the final episodes in the series.

4. It is one of two 'Happy Days' spin-offs set in the present.

The world of Happy Days and its related series such as Laverne & Shirley and Joanie Loves Chachi took place in 1950s and '60s. Mork took a leap to the modern day, however, in his own series, which was set in the contemporary late 1970s. The less remembered Blansky's Beauties was also set in the present day. 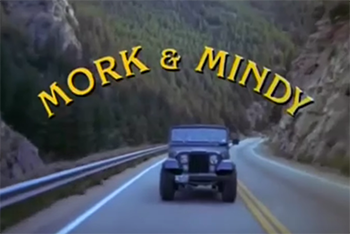 According to the book Happier Days: Paramount Television's Classic Sitcoms, 1974-1984, Garry Marshall first suggested Melissa and Marlo as names for the female lead. "Mindy" had a much better ring to it, though.

6. Pam Dawber was cast without her knowledge and there was no pilot. 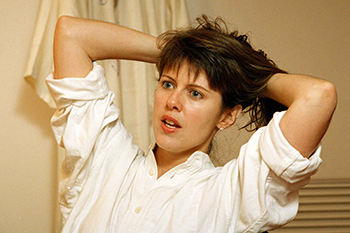 The relatively unknown Pam Dawber filmed a 1978 television pilot called Sister Terri, which featured the actress in the lead role as a former gang leader turned nun. To pitch their concept of Mork & Mindy to the network, Garry Marshall and his team spliced together footage from Sister Terri and "My Favorite Orkan" into a mock-up short. ABC bought the series on recycled footage alone. Pam Dawber, meanwhile, was none the wiser and learned of her casting after the fact. She met Robin Williams for the first time when they went to Boulder, Colorado, to shoot the opening title sequence. 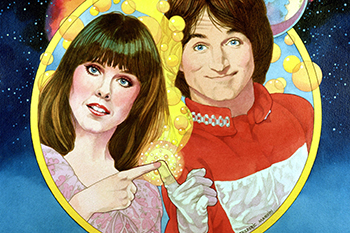 As ratings began to slip, producers tried all sorts of gimmicks to lure viewers in the show's fourth and final season. In part three of the cliffhanger finale "Gotta Run," Mork and Mindy travel in time to the prehistoric era. This sequence was filmed in 3-D. However, the network aired the episode in 2-D, as it did not want to spend money promoting the stunt. The show had already been canceled. 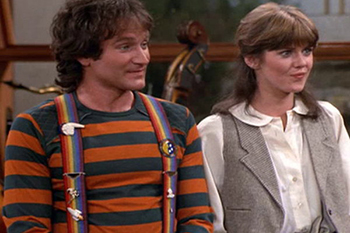 According to a 1979 profile in People Magazine, Garry Marshall suggested Dawber wear a padded bra to "fill out her role." The actress refused. Meanwhile, one rather harsh critic complained that Dawber was a "Marie Osmond clone with no comedic timing and the appeal of cold margarine." Lies! Pam Dawber is a treasure.

9. The voice of Orson was from Tootsie Pop commercials. 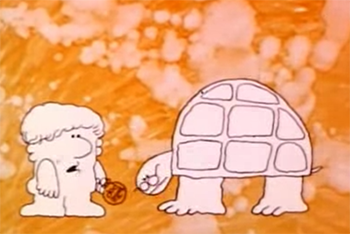 Ralph James was the voice of Orson, Mork's unseen superior. The voice-over veteran also worked on Pink Panther cartoons and was heard as Mr. Turtle in the famous "How many licks?" Tootsie Pop commercial. 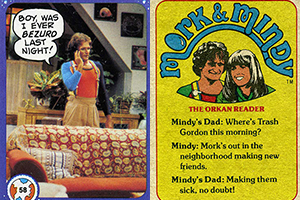 In 1979, the Topps baseball card company released a set of Mork & Mindy trading cards that depicted stills from the show with cartoon dialogue bubbles. The backs of some cards spilled some interesting bio bits about its star. For example, card No. 31 revealed that Peter Lorre was Robin Williams' favorite actor. In fact, Williams has all his lines from The Maltese Falcon and Casablanca commited to memory!

11. There was a national contest to name Mork's baby… but not really. 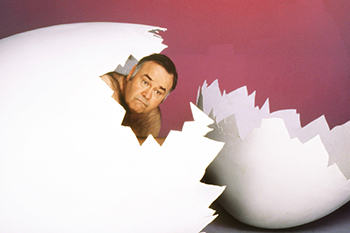 To spice up the fourth season, Mork and Mindy were married and given a child, played by legendary comedian Jonathan Winters, one of the key influences on Robin Williams. (Orkans age in reverse, remember.) The producers held a national contest to name Mork’s baby. However, they had already settled on "Mearth." They waited until someone submitted that name. Hard as it is to believe, that eventually happened.

12. Jay Leno auditioned for the show but was told his face would "scare children." 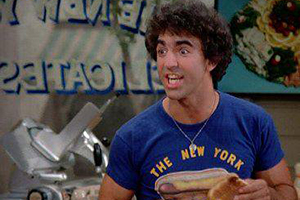 13. William Shatner appeared on the show and was paid in clothing. 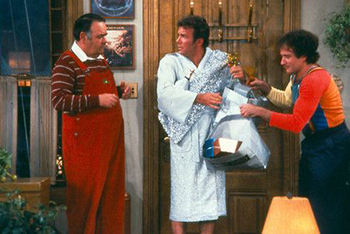 Brian Levant, executive producer of Mork & Mindy’s final season, revealed to io9 that Shatner was paid in formal wear. "Shatner did it for a $2,500 suit. That’s what we paid him," Levant said. "We couldn’t put him in an Enterprise uniform, so we put him in a bathrobe."

14. A proposed fifth season would have sent Mork and Mindy traveling through time to escape an assassin. 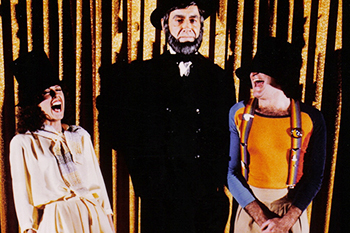 That 3-D cliffhanger we mentioned earlier? It was meant to lead into a wild and wacky fifth season that would have sent Mork and Mindy traveling through time like Bill and Ted. The couple would be on the run from the alien assassin Kalnick (Joe Regalbuto), meeting historical figures like Abraham Lincoln and Ben Franklin along the way. There was even a promotional photo shot with Honest Abe.

15. Robin Williams and Pam Dawber voiced their animated characters, too.

While that bizarre, time-jumping fifth season never came to fruition, the characters did return to visit the past in a Saturday morning cartoon. The Hanna-Barbera-produced show was part of the larger Mork & Mindy/Laverne & Shirley/Fonz Hour, which ran from 1982–83 on ABC. Teenaged Mork and Mindy, voiced by Williams and Dawber, are in high school together. This being a cartoon, Mork had a weird pink space dog named Doing (rhymes with BOING!).

16. The McConnell's music store is now an Athleta. 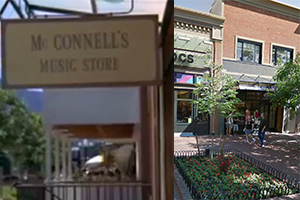 The exterior of McConnell's Music Store, the shop owned by Mindy's dad and grandma, was filmed at the Pearl Street Mall in downtown Boulder. The building still stands today, though it currently houses an Athleta, the Gap-owned chain selling yoga apparel. Mork and Mindy's house can still be visited a few blocks away at 1619 Pine Street.